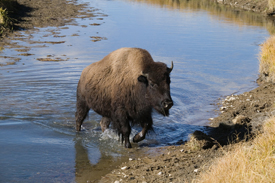 Question of the Month
Why is Yellowstone NP the best location for photographing wildlife
in the US? 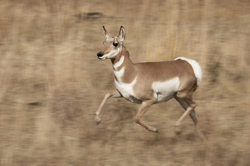 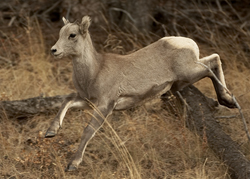 Mary and I just returned from another visit to Yellowstone NP, where we conducted two photo tours, as we have done virtually every autumn since the mid-90s. As usual, the trip was spectacular, and you can read about that trip in the trip report section. This, of course, doesn't answer the question, of course, but it may indicate why we think Yellowstone is the best spot for shooting wildlife.

In contrast to virtually any other location in the US, and probably Canada, as well, Yellowstone offers a large diversity of species -- most of which are fairly or very habituated to people and are easy to film. The mammals are large and common, and on almost any given trip, with three or four days to spend, anyone who puts in some time should definitely see and photograph bison, elk, and pronghorn antelope. With another day or two, and just a bit of luck -- especially if you know where you should be looking, you can add coyote, big horn sheep, mule deer, and moose to that list, and probably black bear, too. 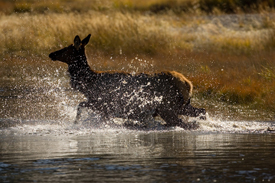 That's eight species of medium to large size mammals, but there's more. On most of our tours, we usually see grizzly bears and gray (timber) wolves, too, although both of these species usually don't cooperate for photography, especially the wolves. We've had great success with grizzly bears some fall seasons, but if you would travel to Yellowstone in mid- to late-April, you're very likely to photograph grizzlies on winter kills. Some folks have done very well with wolves at this time as well, but having success is a matter of putting in the time and having luck.Mountain goats are not listed for the park, but they're there, and sometimes a goat come close to the roads, although you're more likely to see one on the high cliffs in the northeast corner of the park, and around the Golden Gate/Bunsen Pass and Gibbon Falls area.

A very lucky few have photographed puma (cougar/mountain lion) in the park. Last year, for example, one appeared across from the basalt cliff overlooks, where it remained for hours. Most rangers, and most serious photographers who have visited the park have not seen a puma, so don't be expecting to be that lucky.

Additionally, Yellowstone has smaller mammals that certainly make great subjects. Yellow-bellied marmots emerge from hibernation sometime in May, when the weather can still be quite wintery, yet in September, no matter how summer-like the weather, the marmots are already in hibernation. River otters, pine martens, short-tailed weasels, pika, badger, red fox, Uinta ground squirrels, least chipmunks, red squirrels, mountain cottontail rabbits, and antelope jackrabbits also inhabit the park. Over the years I've photographed all but the jackrabbit in the park, although I can't say I've done extremely well with all of those species.

Bird life is diverse, and in the fall you can expect to photograph gray jays and common ravens, and you might be lucky to also get Clark's nutcrackers, trumpeter swans, bald eagles, ospreys, Stellar's jays, great gray owls, great horned owls, and northern dippers. In the spring, add a variety of wrens, woodpeckers, swallows, bluebirds, and sparrows to that list.

Of all the parks we've visited, we know and love Yellowstone the best, and each trip offers something new. If you have the chance, join us on one of our Yellowstone Fall Wildlife Photo Tours and see why.