This is not a breath-taking panorama, but wait until you see the position of the tripod
when I took these three images! My tripod was anything but level.
Question of the Month
Is There an Easy Way to Level a Camera for Panorama Shots? 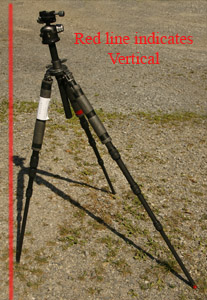 One of the requirements of making a good panorama shot is to have a level pan as you move from one shot to the next. Achieving a level pan can be done in several ways. In our PDF book, Digital Nature Photography, From Capture to Output, we discussed the use of levels, including an inexpensive key-chain level that can simply be rested upon a hotshoe mount.

Checking for levelness is the easy part; the more difficult is to actually get a camera level, and to keep that same degree of levelness throughout a pan. In the image on the right I really exaggerated a tilted camera, extending one leg much further than the others. You can see the pitch with the reference red line.

Now, granted, I've set my tripod on a flat surface so my angle is exaggerated, but I could easily have had a similar disparity of leg length if I was shooting on a steep hillside. Either way, getting a level camera could be very difficult and would require using a camera level and a ballhead which I'd have to tilt this way or that to get the camera level. Unfortunately, a level camera would require a fixed position, since moving the camera left or right, in a pan, would have changed the angle of the ball head that helped me to achieve a level position in the first place.

On 'normal' ground, basically a fairly level surface, it's much easier to achieve a level camera for a panorama. To do so, I first adjust my tripod legs so that the tripod head platform is level. My Gitzo tripod has a bubble level in the head platform area (where you would screw on a ballhead) that indicates when that area is level. Then, with a ballhead, I can level the camera atop this leveled surface. To achieve a level tripod position, however, requires some rather tedious tripod leg work, where I'll have to tilt the tripod in different directions to get a feel for how long I'll have to extend each tripod leg. This can take minutes.

There is a better way. 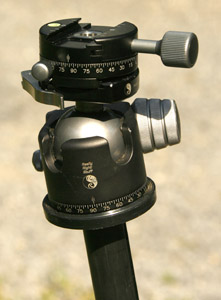 The Really Right Stuff company has a panning clamp that can attach directly to a traditional Arca-Swiss style dovetail mount clamp,like those offered by Arca-Swiss, Foba, Kirk, and Really Right Stuff, and they also offer a ballhead where that panning clamp is built right in. Instead of their traditional locking knob or locking lever (like the one shown to the left), their PCL-1 clamp functions as the quick-release locking clamp.

Regardless of which way you go, with a PCL panning clamp mounted on top of a traditional ballhead or with the BH-55 PCL head sold by RRS, leveling a camera is now extremely easy. Here's all you need to do:

1. Set up your tripod for the shot.
2. Adjust the ballhead so that the PCL panning clamp's built in level is centered, indicating that the camera platform is now level - REGARDLESS of how you positioned the tripod legs.
3. Use the panning feature of the PCL clamp to sweep through your pan.
4. Take pictures while you do step 3, overlapping by about 30% for each shot. 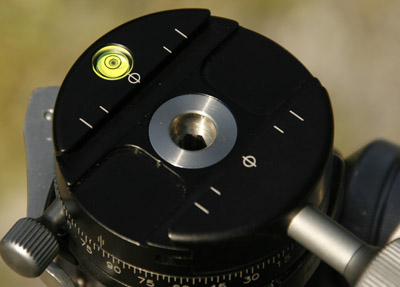 RRS also offers a MPR-CL II, a long lens rail that can be slid forward or backward in the PCL clamp to achieve the correct nodal point for a given lens. RRS also has a very descriptive information sheet included in the package that describes how to find that elusive nodal point and how to shoot panoramas.

At this point in time I elected not to get the MPR-CL II because I have several long lens rails that I'm hoping will achieve the same result. But don't be surprised if I change my mind later on .... I might find one too handy to resist.