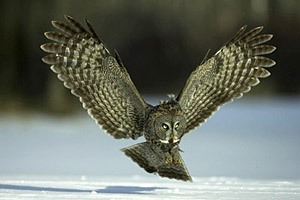 The file I lost and found!
Question of the Month
How do I keep track of digital files?

This past week I lost, recovered, lost, and recovered again a file I desperately wanted to use. At one point, I was convinced that I had somehow deleted the file from my hard drives and I was going to have to go back to my backed up, external drives to find the image. I didn't, because I still had the image on a CF card, and I merely reloaded it -- but what a headache!

As I worked this week, preparing a submission for the BBC Wildlife Photographer of the Year, I was, admittedly, having a bad day(s)! I made the mistake of grouping all of my potential entries into one large file, and then copied files into other folders as I culled images or put them into a folder for further review. Distractions interupted me at times, and, by the near-end of the process I was getting pretty frustrated and confused and I was pining away for the good old days of slides!

Once I got the mess cleaned up, I more sanely recalled those days, and the headaches and worries slides generated. Original images sent out on a submission could get lost or damaged, images used for a slide program might get misfiled in an 'edit' box, or forgotten inside a slide tray. You might say -- You should be using dupes! -- and while that's true, sometimes turn-around for the use of an image was just too short. So slides got away on us, too.

Despite that confession, I DO have a workflow that works, and this week's glych was a product of trying to get too many things done in too little time. What I did would have worked had I written down a flow chart on paper, where I started with one folder and put an arrow to what was next, or what two choices I'd made (edit out or keepers), and then made another arrow for a third division, etc. Instead, I tried to rely on memory, and with a zillion things going on as we prepare for our 6 weeks in Arizona, I was, apparently, brain dead!

Normally, though, my digital life is a bit more orderly. Here's my system.

RAW images are imported into my desktop computer. I have a Super Folder I call 'DIGITAL WORKFLOW' where all of my digital work occurs. This super folder is divided into several categories, and DIGITAL A - RAW Unedited is the folder where my RAW imports go. Sometimes these images are already roughly edited because they were on my laptop -- if I'm on a trip I'll import into my laptop and do a basic edit there using Capture 1, but I don't do a very hard edit since my laptop's screen isn't as precise as my CRT. I'll label each folder that goes into DIGITAL A, so I might have 'day 1 Mara' or 'great gray owls' or 'trout lilies' if that's the topic of the shoot. Later, in Capture 1 I'll edit each of these files and I'll batch rename these, as described in my Tips column.

As you probably know, you don't need to have dupes in camera or save dupes of similar images when you're shooting digital, because any image file can be duped and the same 'original' can be made into equally detailed 'originals.' So, in theory, one needs only 1 wonderful shot of a lioness and her cubs, and not dozens or scores. However, if you're shooting a lot of images, you might shoot hundreds of images, and cull down to 20-50 'great' images that are all somewhat or radically different. If you're like me, you'll probably want to keep all of the great images, even though you might only use 10 or so, or convert those 10 into TIFFs or JPEGs that you'll be using.

Here's what I do. After I edit and cull, I'm left with my keepers. Let's say there are 50 great lions shots, but I have favorites in that group. In Capture 1, I simply put my cursor over the file name, click, and type in the letter 'A'. Now, I may have 40 Lioness and cubs images, all with their own unique file number, and another 10 that read 'Lioness and cubs A' with the unique file name.

These images I then drag into a second folder DIGITAL B, which is my RAW to convert to TIFF file. Since the images are already labeled I can just dump all my 'A's' into this folder which, when I batch convert later, I can then divide into files that are labeled for Mammals, Birds, Reptiles, Flowers, etc. The remaining 40 images, that are 'keepers' but aren't my top picks, I drag into another folder, DIGITAL C - All A's are out. This is my stupid folder, because realistically if I've pulled out my best shots, it is quite likely that I won't revisit the folder to look for more images. But I might, and at least at this point, I'm keeping the shots. Ask me next year, when I may have a couple tetrabytes of stored 'All A's are out' and we'll see.

As I said, when I have time, I convert these 'A's' into TIFFs, and then I'll file them into my mass storage server. I back up this, as well, so that all the files are stored in at least three places.

You might wonder what the heck I did to lose that one file so many times? I'm not going to say! It was just so dumb and chaotic. Mary, in contrast, kept a much more orderly system as she did her selections, and experienced none of my problems!