June 2004
Question of the Month
The Canon 1D Mark II - is it the ultimate camera for wildlife photography? 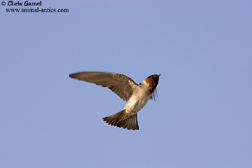 Everyone, it seemed, eagerly awaited Canon's latest digital camera, the Mark II, and rumors abounded about what the camera would feature. Everyone, it seems, had one on order as well, sight unseen. Oddly enough, I did not, but a prescient friend put me on the wait list/order list at Allen's Camera because he knew me and knew I'd want the camera -- so I got one of the first ones out there.

But I didn't have time to shoot it right, to really put it through the wringer to test out exactly how great the camera was. My friend, Chris Gamel (www.animal-antics.net), took his Mark II to the Bear River NWR in Utah to really push the envelope, attempting to shoot cliff swallows in flight. As Chris reported, he had just about dispaired to ever get a swallow in flight (short of using a Phototrapper (see www.phototrap.com), and High Speed Flashes (see Fotronix's).

Chris sent me this image of a flying cliff swallow, and later, several more, that really whetted my appetite. The Mark II caught the bird in focus, and Chris, to his credit, caught the bird in his viewfinder, for if you have ever tried tracking swallows you know how eratic their flight can be and how difficult it is to keep one within your viewfinder.

Graeme Guy in Singapore (see Singapore Nature Photo Society's website) reported similar success from Asia, so I was drooling by this time. Last week I had a chance to finally put my Mark II through a demanding test of flight shooting, shooting with my good buddy Sam Maglione in coastal New Jersey. We worked on terns, gulls, ospreys, and shorebirds. 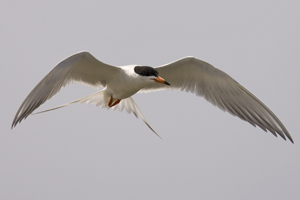 Any good AF system should do a pretty good job with gulls, as they fly fairly slow and steady. Terns are a bit more demanding, but the M2 seemed to keep up on most images. In fact, about 80% of my shots of the gulls and terns when viewed full-sized on my monitor looked critically sharp. Many were not when viewed at 100% as I edited with a Capture 1 program (a beta version, as the original Capture 1 did not support the M2 but the latest version will.). As an aside, although I had problems with the beta version where it crashed I found that I would rather put up with that than go through Photoshop to open a RAW file, click on it to enlarge an area to discern sharpness, cancel, and go on to the next image. Too tedius.

Sam showed me an osprey nest only 15 feet high, right next to a road. Unfortunately the birds were shy so we had to move a considerable distance back to keep from disturbing the birds. When an adult would fly in, it would typically circle, giving us plenty of chances for snaps. Again, ospreys are not fast flying, erratic birds, so the camera wasn't especially challenged. It showed -- everything was a keeper. 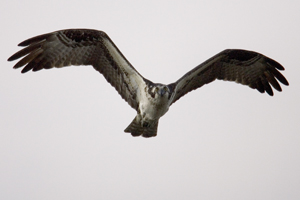 Noise levels are supposed to be much reduced in the M2 and my very unscientific test seemed to confirm this. The light level was quite low and I was shooting at ISO 400, and even then the images were on the dark side. I did most of my corrections with Capture 1 during the RAW conversion, and PS CS did the rest. There was still some 'grain' or noise visible, but not bad -- certainly it did look better than what my 1Ds achieved.

All of the images were made with a 600mm f4 lens with a 1.4X tele-converter attached. Since the M2 has a built-in 1.3 magnification factor, I was finding and tracking birds with the equivalent of a 1092mm lens! That is a lot of glass and magnification, offering an extremely limited angle of view. Finding a subject can be challenging, and indeed it was when I really put the M2 to the test -- shooting shorebirds in flight.

For this we went to Reed's Beach, a world-famous birding site where red knots and ruddy turnstones gather to eat horseshoe crab eggs by the millions to fatten up for their final migratory push to their arctic nesting grounds. Had I written this sentence ten years ago I'd have added 'red knots and ruddy turnstones gather by the thousands (hundreds of thousands?) to eat' but that is no longer the case. Over-fishing of horseshoe crabs, for FERTILIZER for chicken farms, I believe, has decimated the horseshoe crab population. A decade ago Mary and I used to do a weekend photo tour to this area for shorebird photography, and the beaches were lined end to end with crabs. Now, we saw scattered clumps, and this was on the day supposedly peak for crab breeding and for shorebird activity. Instead of seeing thousands of red knots I saw, at most, a few hundred, and I honestly believe I saw less than 100 knots. Living Bird Quarterly did an article on this, warning that the red knot could go extinct. My first-hand look would sure add credence to that fear.

This image is a composite of two, comprised of bigger turnstones for one shot, and the smaller background birds for the other. That's why everything looks in focus. Both shots are cropped, but both were acceptably sharp for publication purposes. Shorebirds fly at least 30mph and maybe closer to 50 -- at any rate, they really whip, and it was a real challenge at 1100mm getting them in the frame. I was amazed that the camera kept up as well as it did with a bird flying straight at the camera.

Side-ways shots were less of an issue if I could keep the birds in the frame, which certainly was an issue. 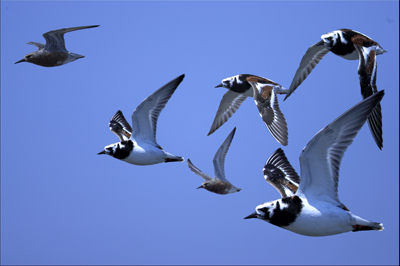 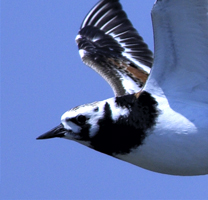 The image of the multiple birds is again a composite, but it pretty accurately reflects what a flock of birds look like as they zip by. The closeup should give you an idea of sharpness. For example, the TIFF conversion resulted in an image that was almost 44 inches long based on the image size I had set in PS, and the turnstones filled no more than 12 inches of that. So, 1/4th or 1/5th of the frame. I'd crop this so that a bird essentially filled my new frame at 8x12, and at View at Print Size the image was incredibly sharp.

Remember, we're talking about a bird flying by at close to 50mph, shot with a 1100mm lens. I used a Wimberley action head, and I felt like a desperate gunner on a WWII boat firing at dive-bombing planes. As I said to Sam, I would hope a gunner would have better luck keeping a plane in his sights than I did with these shorebirds!

I never thought I'd have a chance to get sharp images of flying shorebirds. Years ago, it was virtually impossible. I did shoot a lot of images, maybe 400 in total, and I only kept about 40 for further consideration. With film, that would have represented 10 rolls, at a total cost of approximately $100 or so. With digital, it was free -- or no more than the cost of the Memory card that I could use over and over again.

This test may have marked my swan song with film. I don't see the point, unless all of us pros find that the markets simply won't accept digital images. That is not going to happen. In short, I loved the camera and it will become my wildlife camera of the future.

One GLITCH - at the end of the day I tried shooting a final subject and my AF custom function, 4-1, wasn't working. I thought that odd, and tried to change my CF via the screen, but it wouldn't light up. Virtually all the electronics were frozen up with the exception of the operating mode (Manual - Tv - Av - P) which unlocked the freeze up once I tried it. Prior to that I tried taking out the battery to clear the computer, turning the camera on and off, anything I could think of, but nothing worked. Hopefully this isn't a problem I'll see again, or is that a problem stirring in the depths of our M2s!

As I write this, June 2004, the Mark 2 is in very limited supply. As I mentioned earlier, I bought mine from Allen's Camera, 215 547-2841, and I buy virtually all of my camera equipment from Allen. His prices meet and usually beat B&H's or any other catalog mailorder house; his service is personal; and his attention to your needs and his honesty is without parallel. Check him out!

Oops, almost forgot, I don't know if I really answered the Question of the Month. If the writeup didn't clue you in to the answer, then I'll be direct:

YES!
Previous Questions of the Month
KEY:
Contact us by e-mail:info@hoothollow.com