May-June 2003
Question of the Month
What is the Fotronix Flash System?

I've been using various high speed flash units for years, starting with Sunpak's that I 'dialed down' to a low power ratio for a fast flash duration and continuing with Nikon, Canon, and Vivitar flashes that also offer this capability. Normally, using high speed flash results in a flash pulse that is rather weak in its Guide Number, which necessitates having to place the flashes rather close to a subject. For extremely fast flash durations, this flash-to-subject distance might be a foot or less, which can be extremely inconvenient when attempting to work some subjects.

The late Ken Olson produced a flash system known as the Olson High Speed Flash Unit, and this advance was wonderful for high speed flash photography. The Olson system featured flash units of 1/18,000th sec and 1/25,000th sec flash durations for the low-power unit, and 1/25,000th sec. and 1/35,000th sec for the high speed system, with a relatively high Guide Number as well. I used the Olson system for years and obtained wonderful images. But there were two or three problems.

One, the units were a bit 'touchy,' and I had to be very careful not to get dirt or moisture in the unit or they'd arch and blow.
Two, the flash heads were separate units connected to the 'control box' where the capacitors for the flash, and the voltage, was stored. To fire the flashes, a voltage pulse had to travel through the flash cables to the flash heads, and as much as 3,500 volts may have been involved. This was potentially extremely dangerous, and several people who had considered buying Ken's system and marketing, and servicing, old units decided not to do so because of the safety issue. I know of one photographer who was knocked flat by being shocked, and I've been told that the High Speed System could kill you if the box shorted out (at the Full and Half Power Switch) or if a cord was frayed.
Three, Ken has passed away and there's no easy or reliable source for repairing those units. Accordingly, I've used my Olson's very sparingly and only on special projects, assuming that when they break that they are finished. However, now that I know more about the voltage involved and the potential danger, I'm reluctant to use them at all!

So where does that leave anyone who needs a High Speed Flash System that has a high Guide Number, enabling you to position flash heads at a comfortable working distance? The answer is the Fotronix high speed flashes. 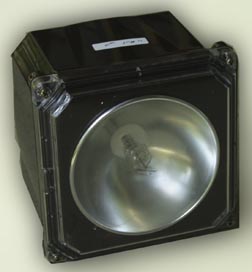 I had an opportunity to field test these flashes with the inventor/developer of the system, Roy Dunn, on our recent hummingbird shoots in Arizona. Each flash head is self-contained, with the flash tube, capacitor, and voltage contained within the head. The power source was a 12 volt rechargeable battery that carried a 12 volt current to the flash heads, where the capacitor's juiced up to the required higher voltage to fire the flashes. Flash durations varied according to the unit -- 1/15,000th for one unit, 1/21,000th for the other, with GN of 40 and 80. After discussing wildlife photographers' needs Roy has since decreased the flash duration somewhat -- even 1/15,000th is faster than required to stop a bird's wings in flight, while increasing the light output by almost 2 stops!

There are several real advantages to the Fotronix flash heads. They include:

One. They are safe, and state of the art. All dangerous voltage is contained within the flash head itself, which is sealed and tamper-proof. The power cables are of minimal voltage and are safe.
Two. The company is new and will be around, so any repairs that may be required can be done by the manufacturer.
Three. The system is weather-proof so the flash heads (indeed, the whole system) can be kept outdoors on a project without fear. I plan to cover my units with a plastic garbage bag when not in use, just for insurance against heavy rains, but I won't be worried about moisture or a light rain destroying the flashes. Most flash units cannot be used in wet weather safely.
Four. One 12 volt battery supplies all the juice for four flash heads, that can be wired together into a 'StopBox' that fires all four flash heads at the same time.
Five. The flash duration is fast, and the recycling time is less than one second. This proved more than adequate for our hummingbird work, which arguably is the fastest shooting one is likely to do with high speed flash units.
Six. The reflectors for the flash heads provide a fairly wide flash dispersal so even coverage is easy to obtain on a subject.

You can get the latest updates, facts, and sample images by visiting the Fotronix's website. I'm using the flashes now, and I am sure they will be the flash system I use for all of my outdoor work from this point on!

Previous Questions of the Month
KEY:
Contact us by e-mail: hoothollow@acsworld.net