Question of the Month
Can a Wimberley Action Head be used with small lenses? 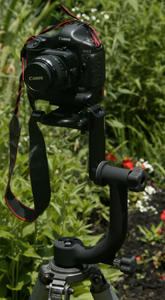 I've received a lot of calls and emails about my last Question of the Month, on the new Wimberley Head, and most of these questions addressed the issue of small lenses and the Wimberley's ActionHead's incapatibility with lenses lacking a tripod collar. As I assured these correspondents, that's not actually true.

Granted, the Wimberley ActionHead is designed for smooth panning, action photography with long lenses, and for that it excels. I'm always so appreciative that Mary's long 500mm or my 500 or 600mm lenses don't 'mouse trap' on my fingers when I have the head's locking knobs loose, as happens with traditional ballheads. But sometimes I need to switch lenses to use a small focal length, and if I don't have a ballhead along, too, one could think I'd have a problem.

However, as we always say in our Advanced D-CNPC courses, for every problem there is a solution, and actually there are two available here. One, Wimberley's M-8 Perpendicular Plate mounts directly onto your camera's mounting plate, provided, of course, it is an Arca-Swiss style plate. With this plate you can slip the M-8 into the Wimberley ActionHead Version II's quick-release clamp. Depending upon your camera body, you may need to slide back the M-8 plate so that your camera body clears the vertical arm of the ActionHead, but you'll still have a secure lock and platform. This M-8 Perpendicular Plate was really designed for the F-2 Macro Bracket for macro photography, but it can also work with the Module 1, 2, and 3 pieces to achieve a similar, though not as flexible, effect. 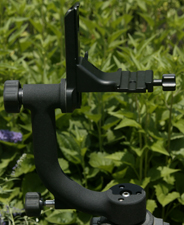 The other option doesn't occur to people as readily, but it sure works, especially if you don't have a M-8 plate (which you should have, they are extremely handy for macro use) or if you need to photograph something straight down. In this option, you simply turn the Wimberley's quick-release plate upside down on the Head's vertical post, while swinging the vertical post so that it now extends upon the point of rotation. To visualize this, consider that if you had a lens/camera mounted on the head in the traditional way, via a lens mount, swinging the camera platform and vertical arm into this position would have you looking through the viewfinder of a camera that was now upside down! Of course, by flipping the quick-release mount, you can have the camera mounted right-side up.

Left Above: The camera mounted with a M-8 plate and the ActionHead in position.
Left: Here you can see how the vertical arm is upright and the camera plate is now reversed. 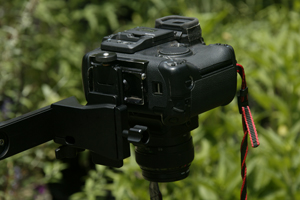 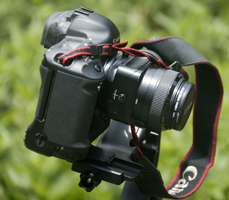 If you have a M-8 plate, you can mount the plate so that the camera mounts in the same direction that a normal lens, with a tripod collar, would mount on the Wimberley. Without the M-8 plate, the camera would mount exactly 90 degrees from that position. To look through the camera viewfinder, you'll have to raise the mounting platform high enough so that the viewfinder clears the vertical post.

Ballheads, of course, are easy to level by simply adjusting the camera platform until you're in the right position. You won't have that flexibility with the Wimberley, but you can still level the camera by simply adjusting one, two, or all three tripod legs. Shortening, or lengthening, two of the three legs will also give you the ability to tilt the camera/lens assembley up or down to some extent. 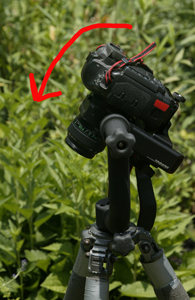 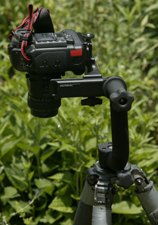 The Wimberley also may give you the best angle for shooting STRAIGHT DOWN. If you've tried tilting the Wimberley too much, either up or down, you'll find that either the lens or the camera catches on the assembley directly above the tripod, or, the tripod itself gets in the field of view. However, if you reverse the mounting plate, you can extend the arm to a 90 degree position and now the lens can be pointed straight down, clear of the tripod. I've used this technique several times.

For more information, call Wimberley at 540-665-2744 or visit their website at www.tripodhead.com.