November 2003
Question of the Month
Is an L-shaped Camera Bracket
Worth the Money? 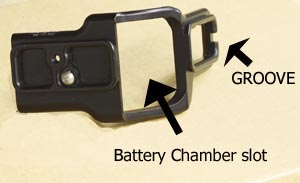 Several years ago, the Really Right Stuff peope, when under the old management, produced an L-shaped camera bracket that allowed photographers to switch from a horizontal format to a vertical format without changing the position of a tripod head. The bracket I had worked, but was a bit clunky and heavy since it relied on its own quick-release clamp to attach to the camera's quick release plate.

The REALLY RIGHT STUFF people, now under new ownership (Joe Johnson), have recently produced a spectacular L-shaped bracket that is actually a camera plate. The plate/bracket screws directly into the camera body (no extra plates required) and is an open, airy design that reduces the weight and permits access to every part of a camera that needs access. For example, there's an opening for the battery insert, and another for getting the camera back open, or plugging in a flash or a remote cord.

I was pretty impressed with the L-shaped bracket when I first saw it and used it, but one day, while in the field, I thought (for a second, mind you) that they messed up the design! I was trying to insert my Remote Cord into the socket and was stupidly trying to thread it through the frame so that the cord wouldn't lie on the plate and prevent the Quick-Release clamp of my tripod from closing. Then I noticed that there was actually a groove in the plate bottom that was designed to accommodate the Remote Cord! I nearly fell over! I was impressed, needless to say, because everything looked like it was laid out just right. And it is.

So why buy an L-shaped bracket. PERSPECTIVE CONSISTANCY

With an L-shaped bracket the perspective doesn't change when you're flipping from a horizontal to a vertical composition -- assuming that your camera is tripod mounted. Short lenses do not have tripod collars so it is impossible to rotate a lens on its axis to achieve changes in Horizontal or Vertical format. To do so, the camera must actually be flipped, and without an L-shaped bracket that means the ballhead must slip into the vertical slot normally provided.

Note that with the pro-series head by Acratech, there is no vertical slot provided. The 'normal' head has such a slot (see Tip-October) but the prohead doesn't. However, with an L-shaped bracket I can flip from horizontal to vertical quickly and easily. See below for an illustration. 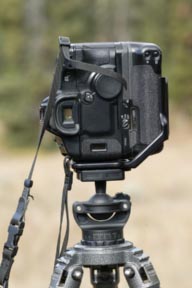 Why is that so important? If you must switch formats, normally you don't wish to switch perspective, and you will if your camera is suddenly turned over, and lower, by being slipped into a vertical slot. If you wanted the precise, exact composition you had when the camera was mounted horizontally, you'll find that you have to raise the tripod legs (or the center column, a bad habit to be into) and you might have to shift the whole assembly left or right since the camera has been flipped off the center axis of the tripod. With an L-shaped bracket that's not necessary, and the lens should be almost exactly where it was when the camera was placed horizontally, although this will depend upon the physical dimensions of the camera body and the exact heights from the center of the lens to each side. Either way, though, you'll find very little shift is involved.

I love the L-bracket and I wouldn't consider doing a scenic trip, involving short lenses, without it. The Really Right Stuff bracket is the neatest, cleanest, best engineered bracket I've seen. Check it out for yourself.