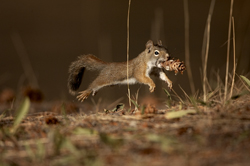 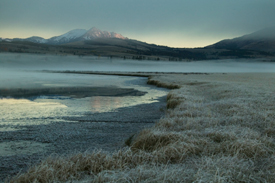 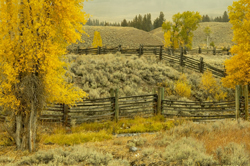 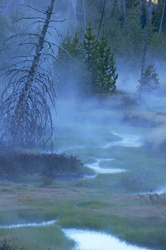 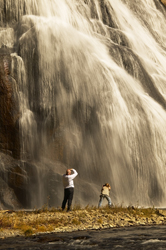 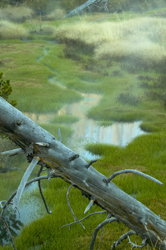 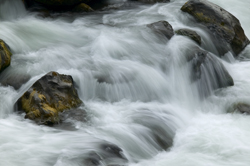 Left: Gardiner River near the big horn sheep drinking area.
As we have done for the past ten years or so, Mary and I conducted two Fall Yellowstone Wildlife Photo Tours again this year and, as usual, they were wonderful and completely different. As happened two years previously, the first week was cooler - ok, colder - than the second, which contradicts the general assumption that as the season progresses the weather should get colder each week. On our first tour, the high country had heavy snow storms, which made driving into the high country treacherous or impossible.

Fortunately, we covered those areas of the park in the first part of the week, which kept us clear of the storm and the crazy drivers who didn't belong on ice or snow-covered roads. A friend of mine was in the high country near Canyon during one of the storms and, aside from having near white-out conditions, he reported that the road home - from Canyon village to Norris - was almost closed, leaving him stranded, and that the driving was almost impossible, with cars strewn across the highway, unable to gain traction on the icy roads. In the Tower area, and the Lamar Valley where we spent our time, we experienced some snow squalls and freezing rain, but the driving conditions were safe. 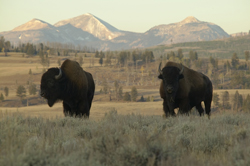 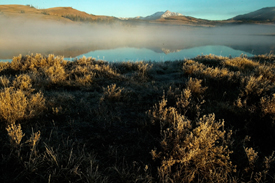 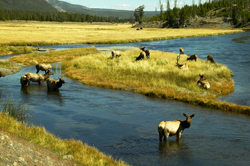 Bison at dawn; Swan Lake at dawn; elk along the Madison in late afternoon. 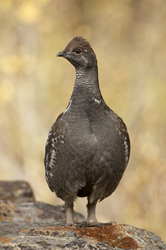 Left: Blue grouse. A flock of seven practically surrounded us, and jumped onto a stone wall only feet from some of the photographers.
On our second Photo Tour the weather was a typical September Indian Summer, with temperatures in the high 60's and 70's almost every day. Fortunately, though, the cold weather of the week before had triggered mammal movement, and the elk and other big game that was supposedly absent from the park appeared for us on both trips.

It is absolutely amazing, however, how two tours can be so different, not just in terms of weather but also in the wildlife that is spotted. On the first tour, finding a 'good' bison or bison herd was surprisingly difficult. There were plenty of bison in the park but their activity, or the settings, was generally very lame. We worked hard to get a great bison shot. On the second tour, in contrast, bison were everywhere, and we had our pick of many different settings. That's not to say that the second week is always the best, for a few years ago bears were plentiful on the first tour - with a big, snowy cold snap going through - and absent on the second. You just never know.

The park has certainly changed over the many years that we've been going to Yellowstone, which began in 1986 two years before the devastating summer fires occurred. Now, 20 years later, much of the forest has regenerated, and some areas are now carpeted in head-high lodgepole pines where, only years before, bare hillsides greeted passing cars. 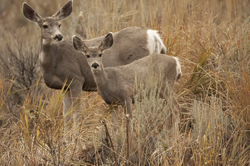 Mule deer, 20 years ago, were hard to find in the park, but today they're common, and both our tours had opportunities for some great shots of bucks, as happened last year as well. We just missed a big mule deer buck that was feeding on the side of the road but passing cars spooked it off the road and into a photo-unfriendly section of heavy trees before we could get our lenses on it.

Twenty years ago or so there were at least 19,000 elk in what is called the greater Yellowstone herd - most of these elk residing in the park. Today, it is estimated that there are about 9,500 remaining. While the introduction of gray wolves is sometimes blamed for the decline of the elk herd, most biologists believe that three other factors are the cause. These include sport hunting pressure (permits for elk hunting around Gardiner have been reduced from a high of over 2,500 to about 100 today); drought - affecting the spring growth and browsing, thus contributing to the over-all health of the herd; and depredation from grizzlies and coyotes on elk calves. It is believed that about 60-75
% of the elk calves born each year are killed by these two predators. Indeed, grizzlies are much more common now than they were 20 years ago when we started our tours. 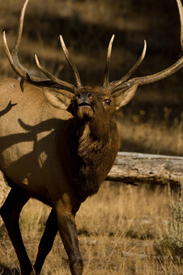 That's not to say that we don't photograph elk, but they're not as easy to get as they were just ten years ago. Of course, though, there are some hotspots that always produce and both tours had some great opportunities for filming the exciting elk rut.

As usual, the Mammoth area had some enormous bulls that made life difficult for the Park Rangers as clueless tourists approached very large and dangerous animals. Reports came in that some cars suffered damages as bulls clashed with metallic rivals. We had our best luck, and natural settings, along the Madison River, but coincidentally, as Tour One had trouble getting good elk, some of our participants on Tour Two were afraid they were going to miss the elk. As things turned out, they certainly did not!

We did miss seeing a great gray owl, although we missed one by only minutes one day. Most of our Tour Two participants went on to continue with a Animals of Montana Predator Shoot and on the first full-day, after concluding with a sunset shoot of a grizzly, I almost collided with a great gray as it flew low across the road. It landed on a fence post, and some of our participants climbed out for a shot. The owl must have been hunting when it glided across the road because just minutes later it dropped down in front of the three watchers and caught a vole - no doubt one it heard from its perch across the road. 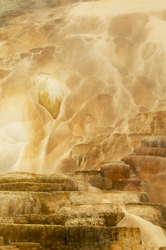 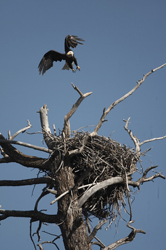 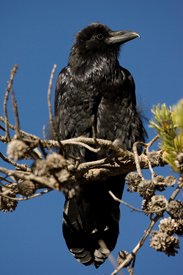 Other highlights for the Yellowstone Photo Tour included great shots of Common Pika for both tours, great aspens that held their color for both trips, mule deer, big horn sheep, and spectacular opportunities with running pronghorn antelope for both shoots. Mary's van had a brief glimpse of a BADGER, the first one either of us had ever seen in the park, and Mary's first, ever, and on one tour we had the most cooperative Bald Eagle we've ever had in the park. 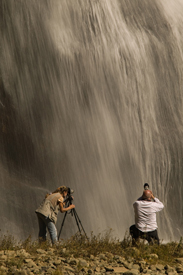 Another highlight for a few hardy hiker/climbers was a descent down an incredibly steep slope to the Gibbon River to shoot Gibbon Falls from the bottom. There is no path that leads from the roadside viewing areas, so basically it is a slide and a dig-in, letting your feet slide through the gravel-like scree for a few feet before you dig in to progress sideways, and not always down. Two days later, one of the two who had climbed down with me almost slipped out of control repeating that hike, and only a tree -- and very scraped bare forearms -- prevented a serious fall. Still, the hike down was a personal challenge and the images were certainly noteworthy -- in fact, it is just the second time I've made the climb myself!

Images, of course, tell an even better story as these accompanying shots will do, so I hope we'll see some of you on our trips to Fall Yellowstone next year.