April 2004
Question of the Month
Is shooting in the RAW format worthwhile?

In several previous Questions of the Month I've explained my initial digital workflow, and my digital workflow when I'm back in the computer lab. We've just completed our first Intro to Adobe Photoshop CS course for the year, and the subject of RAW vs jpg image capture came up repeatedly. Our answer to this question is SHOOT RAW!

One exception -- if you know you're shooting images only for the web or for email -- shooting images for ebay or family shots to jpg out in an email, or even instructional images that you're using in a digital slide show or power point presentation, then jpg files are fine.

However, that's it in my opinion. For one thing, jpg files record imagery much like film does, in that if the white balance is wrong (think of having indoor film loaded and shooting outdoors) or if the exposure is wrong (like under- or over-exposing a shot), with jpg you're stuck. Some manipulation in Photoshop might help, but basically the shot is blown, or at the very least, it won't be as strong an image as it would be if it was shot correct.

RAW format gives you much more freedom -- not that I need it, of course. And I'm not completing joking, or bragging, saying that, because I strive to make the perfect shot (in terms of white balance, exposure, focus, etc.) when shooting a RAW digital file just as I do with film. Nothing has changed, including my exposure methodology. But ... sometimes you goof. 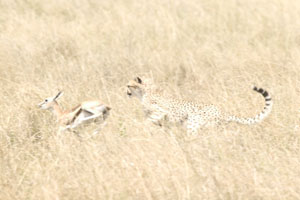 Here's a true story. Last fall, in Kenya, we had a spectacular cheetah hunting chase where a mother cheetah (Princess - previous featured on our website perched on the roof of our safari vehicle with Mary) captured a young Thompson's gazelle and, after stunning it, released it for her three cubs to chase and to thereby learn to hunt. Our vehicles were very close to the action -- the cubs literally chased the prey around our vehicles at times -- and the shooting opportunity was almost unparalleled. When it began, I was hand-holding a 600mm lens (yes, I know that might sound incredible, stupid, both, or bad-camera handling, but it was the only way I could smoothly follow the action at the time) and I was framing a knock-out sequence. To my horror, however, while I was shooting I glanced at my exposure display and saw that I was way over-exposed. Something like 2 or 3 stops. I quickly changed settings and continued shooting, sick in my heart as I wondered how many images in that sequence I had shot incorrectly. It turned out it was all of them up to that point.

A quick aside -- I was being really stupid because had I simply placed the camera on Tv or A mode, the basically middle-tone scene would have been correctly exposed, or close-enough, that a simple adjustment in Photoshop would have solved the problem. But I shoot manual mode, and in this case, I really, really goofed. This error does make me rethink whether I'll shoot a programmed mode in a fast-breaking situation, however.

After the action was finished I scrolled through my images, anxious to review and to learn whether the incorrectly exposed images where as bad as I thought. I think they were worse! I had the over-exposure/highlight alert on, and the LCD monitor literally blinked on and off -- I had really blown it. I missed a great sequence and I was sick about it, and I almost deleted the file right there except I thought I might be able to do something whacky, something creative, with the white-looking images. Clouds or something. Anyway, I didn't delete the images. 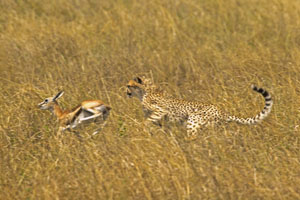 When I returned back to camp I downloaded the images to my laptop, opened Photoshop, and opened what was, FORTUNATELY, a RAW file. Using Adobe's RAW conversion plug-in (this was before Photoshop CS or before I discovered Phase 1 Capture 1 's program, which I prefer) I moved the exposure slider and, before my eyes, the whitish-looking image took on color and contrast. I couldn't believe it -- the image was there.

I'm not going to go into the magic of how RAW works (I wish I knew, truly, precisely how), but I'll tell you that little demo converted every digital shooter that was on the safari with me. I salvaged a ruined image, and while it might not be as 'perfect' as a correctly exposed shot, it was no longer a throw-away.

We'll be covering the how-to's of RAW conversion in all of our Photoshop Classes, as well as in our Digital Complete Nature Photo Courses that we'll be offering this year. When you read about shooting RAW, believe what you read about its advantages. There are so many -- ability to change the white balance and color temperature, as well as gaining about 3 more f-stops of exposure latitude over what you'll get with film or a jpg file. Sharpness, great, big file sizes -- it just goes on. If you hearing the contrary, .... well, I'd question the validity of the information. In subsequent Tips and Questions I'm sure I'll be addressing the RAW advantage far more thoroughly, but this little example truly tells it all.