August 2002
Question of the Month
How did I capture that flying wasp? 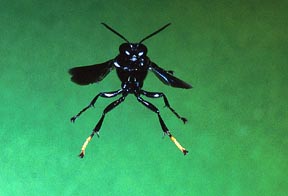 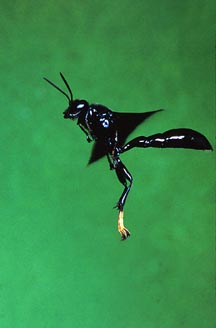 Previously, I discussed the PhotoTrapper, a camera or flash tripping device that allows a photographer to capture birds, bats, frogs, flying squirrels, or any other subject in action. These actions usually occur faster than your reflexes can react to, so, without a mechanical/electrical tripping device, making shots would be almost impossible. I proved that to myself years ago when I tried photographing birds flying in to a nest box, and years before that, flying squirrels gliding. Devices like the PhotoTrapper enable a photographer to capture these activities, and I've used the PhotoTrapper, and before that the Shutterbeam, and before that the Dalebeam, to capture these virtually impossible to film subjects.

Recently we had a group of mud dauber wasps building their columnar nests inside a light fixture right outside our studio/teaching building at Hoot Hollow. The wasps carried gobs of mud up into the fixture to make their nests and, later, carried paralyzed spiders that their young, larvae that hatched upon the paralyzed prey, would feed upon. Working space was extremely tight, and my 'target' area, the wasp, rather small. A traditional infrared transmitting device would have been difficult to use in this situation since I needed to know precisely where the tripping area was and to focus on that location.

I used the PhotoTrap with the laser sensor as my tripping device. My original model has a rather long (3 inches or so) tube that functions as the receiver for the laser beam, and this piece projected too far for the composition when it was positioned directly opposite the laser pointer. So I placed a mirror on the wall behind the nest instead, and aimed the laser pointer so that its reflection would hit the laser receiver that I placed right next to the laser. In this way my target area was defined (via the visible laser beam) and was narrowed, by using the mirror to bounce the laser back to the receiver.

I spoke with the inventor of the PhotoTrap afterwards and outlined the problem I had with the laser receiver. Bill Forbes, the inventor, started working on a better solution immediately, and within days I had a flat, wafer-like receiver that I could place smack up against the wall so that I no longer had to bounce the laser via a mirror. Further, he rigged up a new cross-beam laser that allowed me to use two laser pointers for absolutely pinpoint focusing accuracy, requiring the wasp to cross both beams at precisely the same point. While this pinpoint accuracy means that many wasps will fly into the nest without tripping my camera it also means that those few, or those many, that do will be sharply in focus.

As I have mentioned elsewhere (How do you shoot high-speed action images? and  What is the most versatile remote release camera firing system?, I really enjoy using the PhotoTrap but perhaps more importantly, I really appreciate the prompt service and attention to figuring out and producing a solution to the special photo problems I may face.

For more information on the PhotoTrap, please visit www.phototrap.com and check out the products.

Do YOU have a Question you'd like addressed? If so, please forward your question to our email address, below, and title the subject of your email (in the Subject field) 'Proposed Question of the Month. Can't promise you we'll address your particular question but we'll do the best we can do.

Previous Questions of the Month
Contact us by e-mail: hoothollow@acsworld.net