Question of the Month
Wildlife Models/Captives - Is there anything new to shoot?
You bet there is! 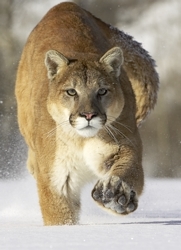 In the 1990's the 'secret' of wildlife model/captive model shooting was uncovered. Prior to that, throughout the 1980's, I'd see wonderful images of cougars, lynx, wolves, bobcats, and other animals, often with young, sometimes interacting with other species, and always, as I'd see these images, I'd wonder how in the world the photographer captured the scene. Back then, in the 1980's, truth in captioning wasn't an issue because so few knew of the limited number of facilities that were available.

In the 1990's and onward, wildlife model photography became main stream, and photographers streamed to many of these locations by the hundreds. During much of that time we visited, with tours, one facility at least twice a year, and our stock file of virtually all the North American predators, and a few exotics, grew and grew. By the late 1990's I was pretty much burned out of shooting these captives, although I was rejuvenated when I visited a new different facility a few years ago. Still, after a few shoots I was beginning to feel the same burned out feeling.

THAT HAS CHANGED, and I owe the renewed excitement to two things - the facility I'm using, Animals of Montana, and to DIGITAL. Let's address each. The shooting opportunities I'm seeing at Animals of Montana are the best I've encountered. In the past, I've had limitied chances to photograph predators running, and even when I did the opportunities were generally few and, sometimes, somewhat chaotic. At Animals of Mt. I've had almost exhaustive repeated attempts at running tigers, pumas, wolves, and red foxes during our last shoot in January.

However, even with opportunities it could be possible not to get the most of a great situation, but with digital that's practically not possible. As we stress to our digital photographers, and try to drive the point home to those still shooting film, shooting digital is FREE once the initial investments (which can be costly) are covered. With film, every frame was at a cost, and blasting through a roll of film represented about a $10 investment. With digital, I can shoot as much as I like and do so until I run out of digital storage or cards.

So, how has the Digital world changed the world of captive animal/wildlife model shooting? With Digital, I'm capturing images I've simply never been able to do before. With the modern AutoFocus lenses, a spectacular advance in lens technology, and by shooting in RAW, which practically insures great exposures, I'm capturing images I've only dreamt of. You may have heard the line, 'throw enough crap against a wall and some of it will stick,' and, as insulting as that might seem for a serious, competent photographer, it's really true. On our first day of shooting, I went through almost 18 gigabytes of cards - that's the equivalent of around 50 rolls of 36 exposure film. With film, that day's shoot would have represented $500, and on subsequent days, shooting $300, $350, and $400 dollar/days in terms of film, the shoot would have cost me an additional $1,550, but it didn't as I could use the same cards, the same storage devices, over-and-over again, on that trip, and on all those that preceeded or followed!

So, is there anything new to shoot? You bet there is, and I'd suspect that some photographers who have made their professional career's in a large part on shooting captives are now on to other things. This is conjecture, of course, but I'd suspect many now have a 'been there, done that' attitude, as their files may be stuffed with images captured on film. Images made in 'the old days,' when AF wasn't nearly as accurate as it now is, and where film costs could have potentially compromised one's shooting. With digital, virtually every pose can be captured, and deleted as required Consequently, the potential for capturing THE decisive moment, the ultimate pose, is very much increased.

I'm really excited about this, because this new technology is allowing me to capture images simply not possible before. AF lenses, 8 frames-per-second cameras, and an endless budget (remember, it's not costing me to shoot any frames) is unleashing my creative potential, and the results make me very happy.

Finally, I must add a few words to this whole captive animal issue and the ethics involved. Over the years I've certainly had the opportunity to mull over the reasons I photograph wildlife and it boils down to this: Through my photography I celebrate life. Mary and I enjoy photographing virtually everything in the natural world, from landscapes and plants to spiders and snakes. Further, I think we get almost as much pleasure out of simply seeing and soaking in, in a spiritual sense, the natural world, and truly some of the highlights of my life with wildlife have been those where I didn't take a photograph.

However, as I look at my images of a Siberian tiger charging across the snow, or a puma bounding towards me, snow flying, at eye-level, I realize that these particular images, these striking images that so clearly illustrate the power, majesty, and beauty of these animals, cannot be captured any other way. I defy any critic to show me differently - it's simply impossible, I believe, to film a wild puma running straight on at a camera. It can be painted or drawn, sure, either from an artist's imagination or from reference photos or from memory, but to be photographed, no. Yet it can be done, and in doing so, in capturing this power and beauty, I hope that the majesty and magic of these wonderful animals can be conveyed and, put to the right use, can help preserve those remaining in the wild.