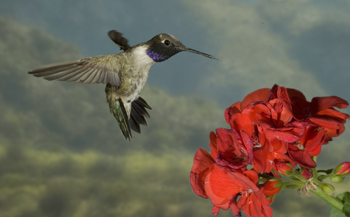 Question of the Month
How many flashes do you need for effectively lighting hummingbirds? 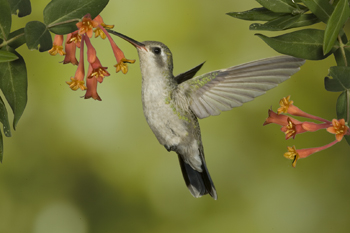 As I write this, I'm taking a break from the nearly week-long packing job required for suiting up for our Arizona Hummingbird High Speed Flash Photo Tour and our Arizona Digital Complete Nature Photo Courses. Since we supply all the flash equipment and Mary cooks both lunch and dinner for both the tours and courses, our 8' bed F250 truck is filled to the brim with gear - flash, camera, and kitchen. While Mary can address the kitchen paraphernalia, I'll limit my response to the flash equipment.

A better system is a three flash system, with two flashes aimed at the subject and one at the background. So, what's the difference between having one flash directed at the hummingbird, or having two? One flash can produce sharp shadows on parts of the bird, depending on the bird's pose or the position of its wings. Two flashes reduce or eliminate these distracting shadows, as the two flashes can function as either two Key flashes, or a Key and Fill flash. The third flash is still directed at the background to avoid that night-time effect.

The fourth flash can also be used as a BACKLIGHT, where the flash is position behind the bird and aimed at the bird to create a rim-light or hair-light. This can set a bird off from the background, and with brightly exposed edges, the look can be attractive or striking.

The fourth flash can also be aimed at the subject, so that the hummingbird is struck by three front flashes. If this is done, the third flash can be positioned to try to maximize the chances of catching a reflection from the bird's iridescent gorget. Sometimes this works, but it depends upon the birds' position for the gorget's reflection to be caught by the flash.

On our hummingbird shoots we typically use a three or a four flash system, using that fourth flash in any one of the combinations discussed above. Although we illustrate, and teach, this material in our Arizona-based courses, our ADVANCED - Digital Nature Photo Course covers this material in depth. If you're interested in flash photography and mastering flash, this would be the course for doing so.

If you're interested in taking hummingbird photos, it might be more prudent to do a hummingbird workshop or tour rather than making the sizable investment to buy the necessary gear. If you're interested in just getting some great shots, and not doing this long-term, this makes perfect sense, especially when you learn what's involved in the setup. Here's one of our typical setups:

4 Hotshoe Flashes, either Vivitar, Sunpak, Nikon, or Canon. Lowest price possible - $80 each, or $320 for a kit of four. Highest price, $300 or so for a Nikon or Canon, or $1,200 for the kit.
Batteries for the flashes - Lowest price possible AA batteries (4) for a few dollars, but the flashes won't fire a flash series for very long. We use Quantum Turbos so that we can fire flashes rapidly, as the recycling is fast. Cost: $370 each, plus flash cables, or about $600 per flash setup.
4 Bogen Articulating Arms and Bogen Super Clamps for holding the flashes. Price: $90 per arm, or $360 for the four sets.
1 Wimberley Plamp for props or flowers: $30
PC cords, Slave Units, Multi-PC blocks - depending upon how you rig up your flash system, figure at least $100.
Backgrounds and Frames - At least $10 for matte board, a photo, or a frame.
Knowing how to set all this up - Priceless, or a lot of hard work and experience.

Our hummingbird shoots involve 5 complete flash setups, so we're looking at the above equipment times five, which is why our truck is filled to capacity when we head out for these shoots. If you're interested, we'll be doing this shoot again next year, and although we don't have the exact dates setup for either the Hummingbird Photo Tours or the Arizona Digital -Complete Nature Photo Course, they will occur in April and early May. Both are extremely popular and fill rather quickly, so if you're interested you may wish to inquire at our office now to get onto our 'first alert' list so that you can be contacted as soon as those dates and prices are set.