Question of the Month
May-June 2009 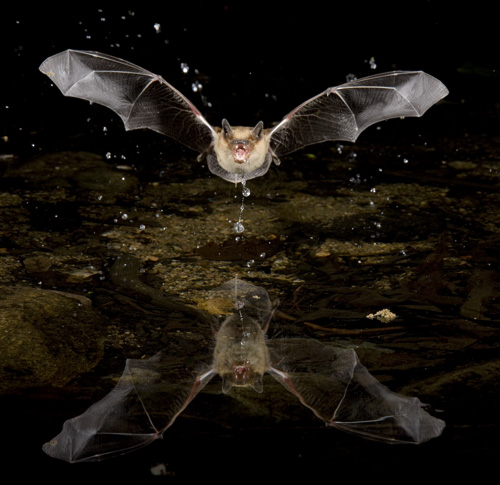 How did I shoot these flying bats? 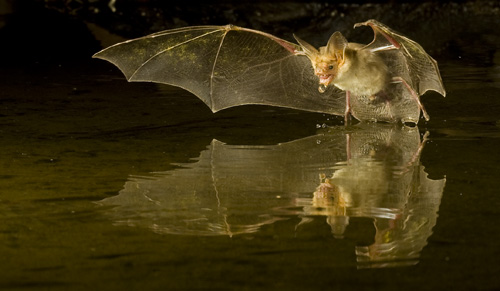 On our Arizona Hummingbird High Speed Flash Photo Tour and Workshop I had an opportunity to photograph bats, and the experience was exciting, challenging, and also a bit daunting. I started my project at my friend Bill Forbes's Pond, where people photograph at his wonderful desert waterhole during the day and where bats visit by night to drink. Bill had a setup pretty much worked out, so I didn't have to do much more work than to add some extra flashes to increase my f-stop, and focus on the area where Bill thought the bats were most likely to be. The spectacular Pallid Bat here was a shot from one of the three visits I made to Bill's Pond, and each time I got a great shot of a Pallid Bat. So, to answer the Question of the Month for this shot -- the answer would be not much!

Call me stubborn, or independent, or worse, but I enjoy solving my own challenges just as much as I enjoy making great shots, and I soon discovered that the tiny mountain stream that trickled down through Madera Canyon hosted several bat species that drank at small pools along the water course. One of the largest pools was, quite coincidentally and fortuititously, located very close to the room where we were staying. Bill loaned me a video camera that has a 'night shot' feature where, with the aid of an infrared light - that Bill loaned me - I could monitor the pool and assess whether or not it'd be worth setting up. We soon discovered that there were a lot of bats flying in for a drink, so I decided to set up.

On our first night my friend Dave Northcott and I set up his Olson flashes and our cameras attached to a PhotoTrap. It was Dave's last night in Arizona so we decided to 'go for it' and probably pushed the envelope for getting a lucky shot. Dave got one which was incredibly good considering we really hadn't worked out focusing distances and bat flight speed, but most of the bats flew high and out of our camera angle.

The next evening I decided to be a bit more methodical. I set up Bill's video for 2 hours of video coverage and one camera and flash set parallel to the bats' flight path. My goal was to determine how far a bat flew between the time the bat passed the infrared sensor of the PhotoTrap and the time the camera fired. The problem with all this type of work is not the triggering device (the PhotoTrap) but is the camera, for every camera has a lag time. Lag time is the time it takes for the camera to respond, flipping up the mirror, closing down the aperture, and opening the shutter and firing the flash, and in many cameras it is about 50-60 miliseconds, about 1/20th of a second. My old film camera, the Canon EOS RS had a lag time of 1/180th of a second, so a subject barely traveled 3 inches or so before the camera fired. Now, subjects like these bats are flying considerably further! 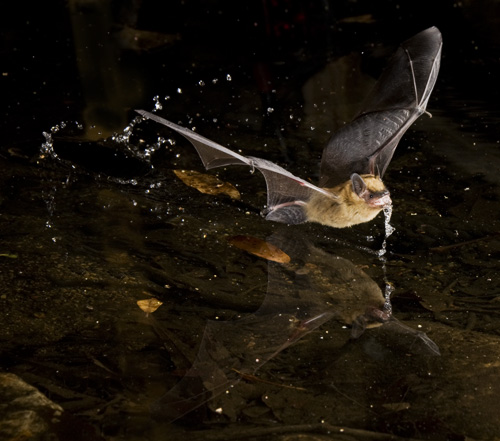 Once I got the 'average' flying distance I set up my cameras and flashes. This is easier said than done. For the flashes and the PhotoTrap beam I had to construct a rail fence to span the pool so that I could attach my flashes and beam. Once that was secure I added the flashes, attached them VERY securely to the fence via Bogen Articulated Arms and Bogen Super Clamps. My worry was that I wouldn't tighten one of the locks securely, or that a flash hotshoe mount wouldn't be secure and a flash would sllip off and fall into the pool. Fortunately I was methodical enough that I had no accidents.

The fence supplied the light on the right side, and for the left I attached my flashes to Bogen Platform Bases and the Bogen Articulated Arms. The Bogen Bases are a heavy, flat U-shaped mount that allowed me to mount the flashes very low to the water surface. I angled the Arms forward to position the flashes as close to the bats as possible, and weighed the bases down with rocks to provide some extra security.

All told, I had 4 Articulatied Arms on the right side, holding 4 flashes, and another Articulated Arm to support the PhotoTrap infrared beam, and 4 Articulated Arms on the left - 3 attached to Bogen Bases and one to a super clamp and a brace I rigged up. I'd leave the camera running all night and usually fire off about 25 shots for my trouble. Some nights I got nothing for the effort, as bats flew to the left or right and partially out of my frame, or flew high or flew slower than I expected, resulting in misframed images or out-of-focus shots. But on most nights I got a few real keepers, and they were exciting!

Luck was with me in another way, too. This year the nectar feeding, sugar-stealing Lesser long-nosed bats came in early and started hitting our hummingbird feeders after dark. I rigged up another PhotoTrap and another set of flashes, and used my PhotoTrap on its unique L shaped mode, a right angle mode where the transmitter and receiver are positioned at right angles to each other so that a subject, if it hits the sweet spot where the two beams would intersect in space, fires the PhotoTrap and the camera. Working distance was easy, I was close and could use a 16-35mm zoom lens at the bats flew in. For my lighting I had 4 flashes set on either side of my camera, mounted on 4 Bogen Magic Arms and 4 Super Clamps, with the camera attached to a 5th, and the hummingbird feeder to an Articulated Arm.

Next year I'm looking forward to even more exciting bat shooting, and we're hoping to offer a special hummingbird/bat shoot for the last week of our hummingbird shoots. Hopefully I'll see you there!

Once again, I must first thank Bogen for their generous support in supplying us with extra Bogen Magic Arms, Articulating Arms, and Lightstands, which we used in a huge variety of different applications. I must also thank Bill Forbes, the inventor and distributor of the PhotoTrap and the owner of The Pond, for all of his help.

What filters do Digital Shooters Still Need?
How difficult is it to master MASKS?
WHY WE SWITCHED FROM Nikon to Canon
Does the automatic sensor cleaning feature of the Mark III really work?
What is our initial Digital Workflow?
What is our Digital Workflow in the Lab?
How do I keep track of Digital Files?
Is Shooting in the RAW format worthwhile?
What is the Difference?
How can you capture a sharp image and angel hair on a windy day?
Can you match the Histograms?
How do we meter White?
Is the Mark II the ultimate wildlife digital camera?
What is DEC?
Wildlife Models - Is there anything new to shoot?
Do You Need a Big Printer?
Can a Wimberley Head be used with small lenses?
What is Reality? Adobe's powerful LIGHTROOM Program
Why must you have at least 2 digital backups?
Is Digital Manipulation - a benign alternative to interacting in the natural world?
Film or Digital? - Why you should shoot film!
Does the Visibledust cleaning system really work?

Flash guide number and flash compensation
How do you shoot from a small boat?
Photo Trap - The Pro's Secret Weapon
LensCoat camera, lens, and tripod covers
What Equipment do we usually take afield?
Does the AutoFocus on the EOS 1D Mark III work?
Which Macro Lens is for You?
What is the Most Important thing you can do before a Workshop?
How many Flashes do you need to effectively illuminate hummingbirds?
What is the best shutter speed for panning running mammals?
Is there an easy way to level a camera for panorama shots?
Is the New Wimberley head worth having?
Is an L-Shaped Camera Bracket worth the Money? You bet it is!
Using Zoom lenses with tele-converters and extension tubes -- can you use both together?
Are Image Stabilization Lenses Worth the Money?
What the heck is the Scheimpflug Law?
What is the Best Composition?
Should you have a depth of field Preview button on your camera?
How do you determine distances?
Hyperfocal Distance
Apertures for Macro

Flash and Tele-flash Techniques
What is the best flash for closeup and macro photography?
What is the most versatile remote release camera firing system?
How do you shoot high-speed action images?
How did I shoot the gliding Sugar Glider?
How did I photograph that flying wasp?
What the heck is a Plamp?

Does a National Geographic photographer's
shooting supersede the rights of everyone else?
Can Photographing Wildlife Models make Conservation Sense?
Is Kenya safe to visit in 2008?
What I did on my summer 'vacation.'
Why is Yellowstone the best for wildlife photography in the US?
Is a Trip to Antarctica Worth it?
What is the best season to do a photo safari in East Africa?
What is the Big Lie? The truth about Kenya's Tourism--it is SAFE!
Which Mountain Park is better for wildlife - Denali or Torres del Paine?
What are our Five Favorite Shooting Locales?
How can you attract insectivorous birds to your feeding stations and bait sites?
How do you make things happen in wildlife photography?
What is the best Car Window Mount?
How can you save your shoulders?
How can you reduce contrast and the effect of wind for flower and macro photography?
What is the best Game Caller?
How Easy is Whale Photography?
Why Can't You Feed A Bear?
What is our Favorite bird-shooting location?