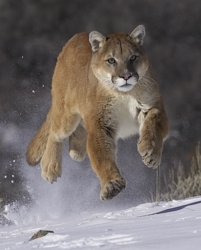 Captive puma charging toward the camera.

I recently attended the annual NANPA (North American Nature Photography Association) summit where one of the breakout sessions was concerned with 'The Ethics of Subject Welfare: Animals, People, and the Land." If you've ever been to a NANPA summit you know that there is an annual debate or discussion on the use of captive animals, and whether or not this is something nature or wildlife photographers, or NANPA attendees, should be doing, or even condoning.

Although the subject of the breakout session was devoted to animals and plants, the land was barely touched upon; the most interesting aspect of the session was the debate concerning captive animals. It grew rather heated at times, and because this topic deserves more than a cursory comment or opinion I kept out of the debate. However, I certainly had an opinion.

The point was made that the wild brethren of captive animals, or wildlife models as they're sometimes inaccurately called, require vast tracks of territory. Mountain lions, or pumas, for example may require hundreds of square miles. This is true, but it is due as much for the need to find a sufficient amount of food as it may be for any innate need to roam vast tracks of land. Innumerable range studies support this, as in game- or food-rich areas a territory or home range may shrink to only a fraction of that area. A tiger study, now out-dated, showed a tigress with a home range of twenty-five square miles, shared with three other tigresses and a male. Recently, in Chile I observed 12 different pumas, comprising three different family groups, in a straight-line distance of 2.5 miles!

Most critics of captive animal shoots have not photographed at a 'game ranch,' so their opinion or prejudice may be based upon misconceptions, bias, or anthropomorphic sentiments. No doubt some facilities or instances would confirm some of these opinions, and that is, of course, tragic. I'd argue, however, that that would be the exception and not the rule, if for no other reason than the animals at these facilities are their 'bread and butter' and having unhealthy or mistreated animals is not in the game farm's best interest.

One could argue about cage size, fairness to these 'wild' animals, and any number of other points forever, but two points should be addressed. One, none of these animals are 'wild' in the truest sense of the word, as all were born and raised in captivity. None are taken from the wild, and as such these animals are 'wildlife' only in the sense that the species to which they belong do exist in a wild state. These captive animals, born and raised in captivity and often with a great deal of affection and care, know no other life. With the training and conditioning and exercise required to keep the animals workable, to keep the truly 'wild' nature of potentially dangerous animals suppressed, they often lead a far more pleasant and rewarding life than many dogs, man's best friend. For example, a beagle kept for a November rabbit-hunting season may spend the next ten or eleven months in a tiny chicken coupe-sized beagle-run or kennel, and many a 'family pet,' even in neighborhoods of affluent or educated people, may spend most of its adult life isolated from its social unit, the dog's owners, in a dog run or worse, chained to a post and confined to a sterile, barren circle of paw-trodden earth.
That's not my point here, as I'm not trying to justify one 'evil' by exposing another. If I were, then I'd expound upon the plight of calves imprisoned for the production of veal, or the conditions I've occasionally seen at zoos, venerated or excused as educational institutions, where conditions are often less than ideal, and where the animals inside may have no other interaction or stimulus than the stares of on-lookers and the feeding and cleaning by their keepers.

Instead, I'd like to point out the iconic value these captive animals provide, and the necessity of this symbolism. Too many of us are looking at our world with rose-tinted glasses where we see what we'd like to see, and hope for what we'd like to be. I don't think there are many among us who would not agree that wildlife, as a whole, is in trouble for all sorts of reasons, including human pressures and habitat loss. All of us would love to preserve wildlife for its own sake, with no strings attached, for the basic belief that this is right. And of course, every wildlife photographer would prefer to photograph a truly wild animal than one that is controlled, captive, or kept in a zoo.

Unfortunately, external pressures may intrude upon this noble goal. 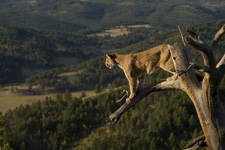 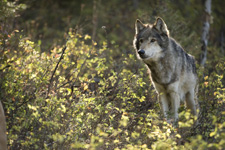 Do we need icons? Can we 'sell' the idea of conservation, the worth of species, by words alone? When a puma attacks a jogger in Colorado or California, will the press illustrate the report with a stock photo of a puma snarling at the camera? A puma that may have been treed by hounds, a truly wild puma, that may be stressed and frightened, and may very well be shot a few minutes after the shot? Would wolves have had the huge public support for their reintroduction into Yellowstone without images depicting wolves in a variety of activities, howling, running, playing with cubs?
The puma above is captive. It voluntarily climbed the tree and now looks out over a landscape dotted by ranch and leisure homes. Is this an iconic image of a wilderness we're losing? The wolf is captive, but was photographed in Montana in habitat one would find in Yellowstone or Glacier. Now that the wolf has been DELISTED as an endangered species, and may be legally hunted, or controlled, in the states surrounding Yellowstone if the state goverments approve, will wolf conservationists, wolf supporters, need images to try to educate the public and to combat local enmity? I think we will!

Although I have no statistics to back this supposition, let's just suppose that 95% of the photographers that visit a game farm know nothing about wildlife, care little for wildlife, and are interested simply in getting some neat shots of 'wild' animals. Many of these photographers may pass off these shots to friends, lecture audiences, print customers, and others as animals they shot in the wild. Now let's consider the other 5% who may use these images to illustrate magazine articles, books, promotional campaigns, or fund-raisers, or may simply use these images as 'artist reference' material for producing paintings or illustrations for these same type of uses.

My argument is this: Even if only a mere 5%, or even 1%, of the photographs shot at a captive facility are used for conservation, it is worth it. As was pointed out at that breakout session, images hook readers, drawing their attention and often enticing them to then go further and to actually read the article, or at the least to buy or subscribe to the magazine or book.

We are a visual society, and we are also one driven by symbols and ideals. Images sell concepts and causes, and while we might wish to pretend that a photograph of a distant speck, a Canadian lynx shot in the wild, will have the impact as an 'iconic' shot filmed at a game farm, the reality is that it will not, at least not for most publications.

One could argue that with enough time and dedication any wild animal could be filmed in the wild, and that's true. Unfortunately, though, that would result in a tiny pool of images to draw from, as the chances of getting those shots are slim. It's been argued that the captive animal shooters are just lazy and are unwilling to work hard for their shots, a conclusion I'd vehemently dispute, but the counter-argument, do we, as wildlife lovers and conservationists, really want hordes of photographers out there even trying?

A track of a wild puma in Chile. For many, that's the closest most photographers
will have with a wild puma, and while it might be considered evocative,
I don't think it will turn many heads. Will this image sell a conservation message?

And even if we did, the chances of success are slim, and the inventory of images that might result would be very small. That's fine if a fickle and attention-deficit public would not grow tired of the same photograph appearing over and over again to illustrate a point, but that's not the reality.

Many magazines and some books are realizing this dilemma and are addressing the issue by labeling photographs as controlled or captive. The illustration is still making its point, even if some wide-eyed photographer or reader suffers disappointment when he discovers that the great shot he's admiring was not photographed in the wild. I think we have to get past a hero mentality that might exist when photographing wild animals, implying I'm a better photographer or I work harder or I'm more ethical or a better person because I only shoot wild animals and instead look at the very real value that any good photograph has. After all, what are we trying to do here?

If it is to conserve habitat and wildlife, if it is to educate and motivate the public, then I think we should use every tool at our disposal to do so. In that very important role, captive animals play a vital part. It may not be for you, but no one can deny the value powerful images play, and have played, in conservation.

Does the automatic sensor cleaning feature of the Mark III really work?
What is our initial Digital Workflow?
What is our Digital Workflow in the Lab?
How do I keep track of Digital Files?
Is Shooting in the RAW format worthwhile?
What is the Difference?
How can you capture a sharp image and angel hair on a windy day?
Can you match the Histograms?
How do we meter White?
Is the Mark II the ultimate wildlife digital camera?
What is DEC?
Wildlife Models - Is there anything new to shoot?
Do You Need a Big Printer?
Can a Wimberley Head be used with small lenses?
What is Reality? Adobe's powerful LIGHTROOM Program
Why must you have at least 2 digital backups?
Is Digital Manipulation - a benign alternative to interacting in the natural world?
Film or Digital? - Why you should shoot film!
Does the Visibledust cleaning system really work?

LensCoat camera, lens, and tripod covers
What Equipment do we usually take afield?
Does the AutoFocus on the EOS 1D Mark III work?
Which Macro Lens is for You?
What is the Most Important thing you can do before a Workshop?
How many Flashes do you need to effectively illuminate hummingbirds?
What is the best shutter speed for panning running mammals?
Is there an easy way to level a camera for panorama shots?
Is the New Wimberley head worth having?
Is an L-Shaped Camera Bracket worth the Money? You bet it is!
Using Zoom lenses with tele-converters and extension tubes -- can you use both together?
Are Image Stabilization Lenses Worth the Money?
What the heck is the Scheimpflug Law?
What is the Best Composition?
Should you have a depth of field Preview button on your camera?
How do you determine distances?
Hyperfocal Distance
Apertures for Macro

Flash and Tele-flash Techniques
What is the best flash for closeup and macro photography?
What is the most versatile remote release camera firing system?
How do you shoot high-speed action images?
How did I shoot the gliding Sugar Glider?
How did I photograph that flying wasp?
What the heck is a Plamp?