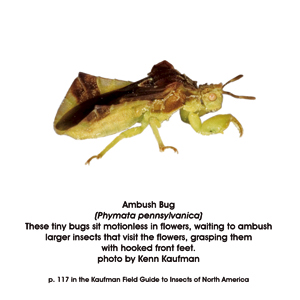 If you are a wildlife photographer that occasionally, or regularly, photographs insects you've probably been as frustrated as I have in trying to identify the subjects you've shot. This past summer, for example, I photographed a winged insect I suspected was a wasp or fly, but it was so odd-looking that I couldn't be sure, and wondered if it was really either one and not a mimic. At any rate, I got good shots but I couldn't label the insect since I had no idea what it was. This isn't an unusual occurence for me when photographing insects. 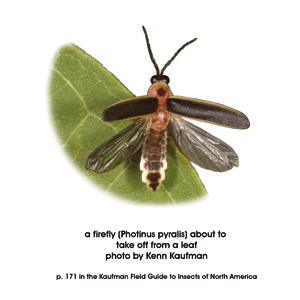 Recently I picked up a copy of Kaufman's insect field guide, and thumbing quickly through the pages I spotted the mystery insect, which indeed proved to be a species of stingless wasp, Arge humeralis, in the Order Hymenoptera that is represented by wasps, bees, and ants. Mystery solved! Finding this wasp was quite the discovery, in a cursory overview of the book, for there are over 2,350 photographic illustrations in the book, only a tiny percentage of the more than 90,000 known species in the US. However, the Kaufman guide illustrates examples of all the most common species, and as my stingless wasp so aptly showed, many of these species are neither common or represented in other books.

That's always been the real frustration of insect guides - so few species are illustrated. The Peterson Field Guide series, for example, had color plates, and black-and-white illustrations, of only a few hundred species, and my Audubon field guide on insects has photo identification plates numbering even less. While Kaufman's guide doesn't show even a fraction of all the species out there, it does show the species you're most likely to notice - 'naked eye entomology' as they call it. Those species, are similar species not illustrated, often are distinguishable only through a stereo dissecting scope or microscopic examination of genitalia - something I'm not too into.

There are other insect guides in my library that are devoted to field observation, binocular-guides if you will, to dragonflies, butterflies, and grasshoppers, but the subject matter in these is obviously limited. A lot of the insects I photograph fall outside these three conspicuous insect groups, and identification, before the Kaufman guide, was pretty hopeless.

Like Kaufman's bird and mammal field guides, the plates are Photoshop-excised images, rarely including a plant or habitat unless its a good clue for identification. Simply extracting an insect from a plant background or habitat is a monumental work, but it results in a clean page with a wealth of species on each page. The book costs $18.95, is co-written by Kenny Kaufman and Eric Eaton, is published by Houghton Mifflin (the publisher of the Peterson field guides), and the ISBN is : 0-618-15310-1.

If you're planning on photographing insects this spring, you'll find this guide as handy as your macro lens! 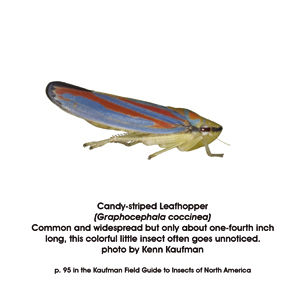 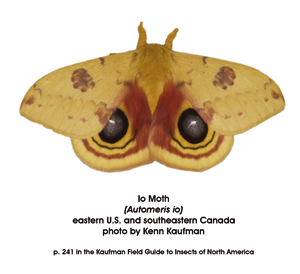