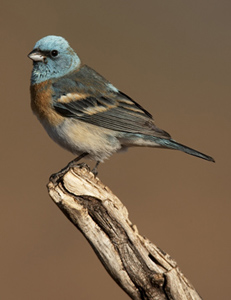 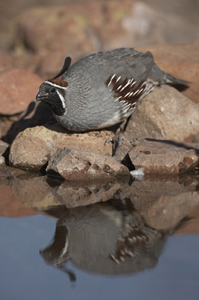 For the last several years I've tried, rather unsuccessfully, to photograph Gambel's Quail at a friend's feeder in southern Arizona, close to where we conduct our Arizona Hi-Speed Flash Hummingbird Shoots. While I've made some OK images of quail and desert cottontail rabbits from the patio of my friend's home, I was frustrated in knowing that there was so much more to shoot, so many more birds I could, or should, be filming. This year I discovered the location where I could do exactly that.

It is called "The Pond," a private shooting location built and maintained by a friend of mine, Bill Forbes. Some of you may recognize that name -- Bill builds the PhotoTrap, the camera- or flash-firing remote sensor I've used for photographing running collared lizards, flying bats, gliding sugar gliders, mud-carrying wasps, and many other subjects. Bill, by the way, still markets the PhotoTrap and a smaller, more portable version of that device.

But Bill has just produced an equally exciting photographic accessory -- The Pond -- on his 10 acre property. Bill lives just south of Green Valley, Arizona, a retirement community about thirty miles south of Tucson. Elephant Head, Bill's community, is about 10 wonderfully rural miles south of there, and is only about 5 miles (as the crow flies) from our location at Madera Canyon, and about thirty-five minutes by road.

During our stay in Arizona, between our Hummingbird Photo Shoots, Mary and/or I shot at Bill's at least three times, and each shoot offered something different. Between those three visits we identified over forty species of birds, and probably had shooting opportunities for at least 25 different species. Once we saw how wonderful the shooting was we encouraged our groups to visit on mornings where they had a free slot in their hummingbird shooting sessions, and nearly everyone took the offer. Bill also discounted our groups, which was unnecessary once photographers realized how great the shooting was. While Mary and I shot at least 25 species, our groups added others that we missed, including brown-crested flycatcher and western kingbird, birds I tried to get on my last visit to the Pond. 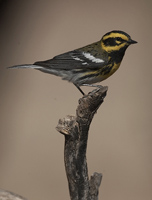 Bill's setup is great for shooting. He has two cloth blinds -- Outhouse or Doghouse style, if you're familiar with blinds often sold in hunting stores, that are attached to heavy-duty PVC pipe to afford a sturdy base that, and this is important, can be moved while the photographer is inside the blind. So, if a blind's porthole isn't positioned just right, or one needs to get a little closer or further back, it's easy to move the blind - while you are inside - to do just that. However, that's actually not necessary because so many birds come and go that it is not a problem to get out of the blind, make adjustments, and go back. The birds flush, of course, but within minutes they're back again.

Bill also has several other blinds, including two that are built into the ground for near ground-level shooting. In late spring these blinds are impractical for morning shooting, but during the winter months, or in late afternoon in spring or summer, these ground-level blinds would work very well. I stayed with the cloth blinds because I was drawn to the Pond and the waterhole setting. However, had I wished to try for orioles, hummers, or various finches, I could have tried the other blinds set up for birds preferring heavier brush cover.

The Pond itself is not very large -- about 16 feet long and 8 foot wide I'd guess, which may not seem like much but is exactly what one needs for successfully photographing desert species seeking water. A small pond insures that all of your subjects will be within range, and you won't have the dilemma of having the blind too far away for some subjects. I used one lens throughout - a 600mm with an extension tube - that allowed me to shoot birds close to the nearest edge of the pond as well as those at the far edge or in the surrounding brush. Friends whom I shot with there used 500mms, often with tele-converters, or 400mms with and without converters, and others used 100-400s.

There's more than water at the pond. Bill has a vast series of props available that are either attached to a movable base or that can be attached, so you can arrange perches, props, and feeding stations as you wish. In this way, you can position a series of woodpecker feeding sites (they love oranges) at the exact distance required to photograph a Gila Woodpecker full-frame, if you so wish. We set up our props to do exactly that, as well as placing branches just above the water surface for birds to land on before they tipped forward for a drink.

The Pond is located in high desert, the scrubby mesquite and prickly-pear habitat that replaces the famous Saguaro Cactus that are found at lower elevations around Tucson. There's usually no standing water available in this habitat -- the nearest water being that running from the mountains several miles away which generally sinks to below ground watersheds by the time it hits the desert. Accordingly, a great water spot draws plenty of birds, and, in certain seasons, may do so by the hundreds. The beautiful black and white Lark Bunting winters in this area and gathers by the multiple scores in season. While we were there, birds were completing their moult from their speckled winter plumage to the striking summer garb.

Bill's Pond is available for shooting throughout the year, and the number of species, and variety, varies with the season. I'd suspect winter and spring may be best, but if I lived in the area I know I'd be visiting the Pond at several different times of year. In Spring the shooting was so good, in fact, that we are now incorporating One Visit to The Pond as part of our Arizona Hi-Speed Hummingbird Photography Shoots. We'll be encouraging our Arizona Digital - Complete Nature Photo Course participants to visit as well during times they have free (which isn't much during that course!).

Shooting at the Pond is by reservation only. The photography is limited to only one photographer unless two know each other and consent to shoot together. The reason for this is so that you, or two shooters who are friends, can decide to place props and perches wherever they wish, without argument. Bill does discount for two photographers, however. There is a small cabin on the property with a queen-size bed, shower, sink, AC, small refrig, and microwave that is available for rental as well. There's a portable toilet close to the shooting site, water in the refrig, and Bill's friendly advice and assistance ready for you as you arrive.