Film has a much narrower exposure latitude than our eyes have. In 'stops of light' we can discern details in light areas and in dark over about a 15 f-sop range. Color slide film has about a 5 stop range, with 2.5 stops over a 'middle tone' yielding featureless whites and 2.5 stops under a middle tone yielding featureless blacks. In contrast to this extreme contrast with color slide film, our eyes have about a 7.5 stop range in either direction from this middle tone value.

The result of this discrepancy is that what we can see, and what we can appreciate as beautiful, may not be effectively rendered on film because FILM CANNOT RECORD the light as we see it. Traditionally, if we expose for light areas the dark areas may be lost in blackness, or, conversely, if we expose for dark areas the light areas burn out and are far too bright to register detail. Again, traditionally we get around this, to an extent, by using graduated or split neutral density filters that cover the brightest areas with the neutral density filter, and by doing so bring the values of the two extremes down to a closer relationship.

This technique most certainly does work if you have exposure value ranges that are four stops or less between the two extremes, provided the difference would look good if one of the values is one stop or two stops over or under the other value. Neutral density filters (graduated or split) with a one or two f-stop gradient often work very well, but sometimes the exposure values are too great, or the areas that are too bright or too dark are too irregular to be effectively covered by a filter. For example, consider a steeply shadowed valley that forms a V in your viewfinder. Inside the arms of the V is an illuminated scene -- perhaps a distant mountain -- that is 3 or more f-stops brighter than the shadowed valley. No one makes a Valley-shaped neutral density filter. Trying to bring up the two diverse exposure values may prove impossible.

In the above illustration, it might be possible to mask the brighter area in the upper part of the scene (the distant mountains and skyscape), but the icebergs in the background could perhaps cause a problem. So, too, could the mountain on the left side of the frame. Exposed for the highlights -- the mountain and sky -- the foreground water and 'bergs are too dark. If the water and icebergs are correctly exposed, the background becomes too bright. Again, the possibility exists that you could maneuver a ND filter in such a way that you could bring the two values into agreement (discussed in previous Tips and in innumerable books), but if your final output is a good print, it might be far easier to simply take two images and make a digital composite that combines the best of both images. 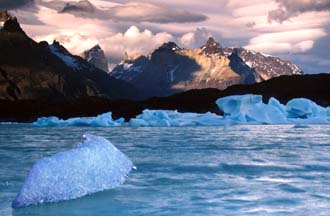 To make the correct exposures, take a spot meter reading of the mountain, and record or remember what that exposure is. Then take a meter reading of the iceberg or the water, and record or remember that exposure. Make sure your camera is mounted on a tripod that is LOCKED SOLID so that the image does not change between the two exposures. Let's say there is a 3 stop difference between the mountain and the foreground. For our example, let's say that the mountain reads 1/60th at f11 and the foreground reads 1/8th sec at f11 or 1/60 at f4. After taking the readings and having the camera firmly mounted on the tripod, shoot a frame at one exposure and, without moving the camera, make another exposure at the other setting. In one image the background will be correctly exposed with the foreground being too dark, and in the other image the background will be overexposed and the foreground will be correct.

By the way, I used this technique on multiple occasions while I was in Chile and Argentina, since the early morning light bathing the mountains in gold or orange had no effect on the foreground, which was considerably (5 stops) darker. Knowing I'd work on composites later allowed me to shoot images, and make compositions I'd normally have to pass on.

In the digital darkroom the two images can be combined into one. It's a bit too lengthy to explain here, but you can learn this technique and many more tricks in our Digital Photography courses offered this summer. Contact us for further information.

Our Past Photo Tips of the Month:
Contact us by e-mail: hoothollow@acsworld.net