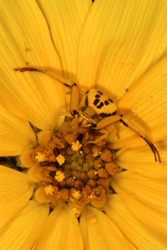 If you read last month's Tip, Seize the Moment, you may suspect that I've been doing a lot of macro work this summer. I have.

Our gardens are filled with praying mantids, cerphid flies, wasps, spiders --- it's sometimes hard to get anything done with the distractions (subjects) in our yard. Tough, I know.

For my macro work I've been using two lenses -- the 100 macro and the 180 macro, selecting which lens depending upon several factors -- how close the subject will allow me to approach, whether a background will be visible, and what flash duration I might need.

For wary subjects -- butterflies, mantids, etc. I often use the 180mm macro lens. The restricted angle of view of that lens also helps with these subjects because these subjects are often perched on top of flowers and, from my shooting perspective, backgrounds could be a problem. But with a narrow angle of view these are minimized.

Using TTL flash, you probably know that the flash duration decreases as the flash-to-subject distance decreases, so if I'm hand-holding (RARE!) or if I'm shooting a subject that might be moving quickly (a bee flying in to a flower for example), I have a greater chance of stopping the action. 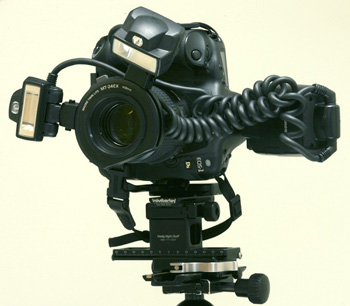 With real closeups, however, getting the camera into just the right position can be a real headache, and that's where the Really Right Stuff geared focusing rail (the B150) really comes in handy. The rail is a two-part system, with the horizontal axis controlled by unlocking a quick-release lever and sliding the camera system left or right. The slider is slick, so it's easy to move in tiny increments, and, in truth, left-right movements aren't needed too often.

Illustrated is one of my favorite setups, using the 100mm macro and Canon's Macro Twin light 24EX flash system. I'm using a RRS L-shaped camera bracket, which is allowing me to mount the camera vertically or horizontally when a RRS B16 converter clamp or a Wimberley SS-080 Module 8 Perpendicular Plate.
Lens equipped with a tripod mount (like my 180) mount directly onto the geared rail.

I'm not a fan of the Canon 60mm 6:1 macro lens, but I've used it on occasions. I've found it very difficult to use at magnifications greater than 3X, mainly because I have trouble finding my subject! Since the subject must be in the center of the lens, precisely locating a subject there is tough. I wouldn't attempt to use that lens these days without using a geared rail to help align the subject.

Here's another view of the rig, showing the knurled knob used for racking the system forward and back, and the quick-release lever for left-right movement. Note that there is a quick-release clamp on top of the block that's designed for lenses with tripod collars (ie forward directed plates), but a camera body will attach to this via the RRS B16 bracket or the Wimberley Module 8 perpendicular plate.

As is all of the RRS equipment, this is heavy-duty well built. Recently, at one of our Complete Nature Photo Courses, one of our students had a competitive rig -- Adorama's, I believe. While it worked, it was rickety and awkward, and I wasn't tempted to call anyone's attention to that system.

Admittedly, there's only so much gear one can carry about, and you might question your need for a geared rail. That's valid, and if you're not a macro shooter you probably won't see very much of a need. However, if you are a macro shooter, or if you live in a target-rich environment for macro like we do, then I think you'd find a lot of use for this precision piece of equipment. In fact, sometimes having a neat piece of gear pushes a photographer into doing new things, trying new shots, or just using the equipment he purchased. I'm like that -- I swear, every time I carry my T/S lenses afield I make it a point to use them! I'm sure you'll find yourself pushing your creative envelope with the geared rail, too, as it truly makes fine-tuning a macro composition so much easier!