February 2004
Tip of the Month
Watch Your Backgrounds

At the recent NANPA conference (the North American Nature Photography Association) held in Portland, Oregon, we had the chance to co-lead field trips with the Infinity Foundation's high school students and with the NANPA adults to Northwest Trek in Washington state. Both field trips went to wildlife-target locations -- for the students, to the Portland Zoo, and for the adults, to Northwest Trek. Both experiences pointed out a common error that we often find with photographers, particularly when we're in Kenya doing a photo safari. And that's the disregard of the effect of the background on the image.

Accordingly, I thought it might be prudent to reinforce that important compositional point before the spring shooting season is really upon us. Let's use a recent example from our Kenya Photo Safaris from the fall of 2003. Normally, when we think of backgrounds we think of the telephone pole in the background seemingly sticking through the head of the subject because the photographer didn't look beyond the subject to inspect the background. Similarly, photographers often pay little attention to bright hotspots like shiny leaves or patches of sky or sparkling water highlights that draw the viewer's eye away from the subject.

On our NANPA field trips we saw numerous examples of this, where shooters failed to take note of a bright sky framing a puma sleeping high on a tree limb on an overcast day, or darkish golden eagles framed by bright spots of light from a well-illuminated background. It's so easy to only look at the subject and to focus on that, and to not look beyond the subject and to become aware of potential distractions. Conversely, foregrounds are usually noticed -- people see the bright leaves or grasses that come between the photographer and the subject, but in the background, well, it's another story.

In this example, I've illustrated an example that is less obvious, but equally deadly. We were photographing a group of lions on a wondrous kopje (a stone outcrop) in the southern Masai Mara on a slightly overcast day. The lions were outlined against the sky, which was a beautiful, dappled sky with gray clouds that threatened rain. This, we could see with our eyes. However, if one took a meter reading of the two values of the scene -- the lions and rocks in the foreground, and the cloudy sky, one would see a HUGE discrepancy between the two exposures. Even though the sky was gray it was still far, far brighter than the lions and the rocks. An exposure based upon the lions would produce a completely blown-out exposure, as you see below, on the left. 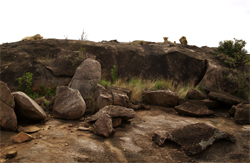 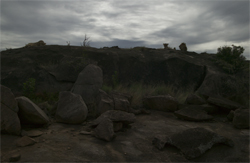 Traditionally, to minimize the distraction of a bright background, one would crop the image by using a longer lens to isolate the lions and to reduce the amount of blank, featureless, over-exposed sky. Alternatively, one could simply pass on the shot. To the left is the actual sky that outlined, and silhouetted, the lions on the rock. As you can clearly see, when the sky is properly exposed, the lions and the rocks are underexposed.

Here's the dilemma. With few, the exposure latitude was simply too great for both exposure values -- that of the lions and rocks and that of the sky -- to properly expose on the film. While a graduated neutral density filter would tone down the sky, and is the traditional means by which this problem is handled, a filter wouldn't work very well here, as the lions' outline sticks up above the rocks and a ND filter doesn't have the 'lion head option' to correct this.

Fortunately, several of us had digital cameras, and I simply suggested taking advantage of the power of a digital camera in capturing truly what our eyes saw.

This can be done in either of two ways. One could take two exposures, quickly, where one exposure is based upon the rocks and lions and the second exposure is based upon the sky. When I do this I simply rotate either my aperture dial or my shutter dial (depending upon the subject) to the new value -- which I determined before taking either of the two images. This speeds up the process and insures that my subject will be in the same position for both shots. This method always works, although it is possible that the lions could move before the second shot is made. This isn't a problem, however. 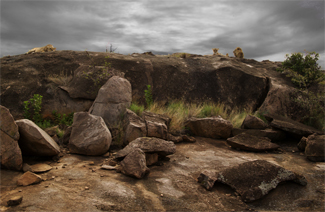 The result is a striking image that represents exactly what I saw, what was truly present.

When I composited this image on the computer I was really taken, because I'd never been able to capture this type of scene where a bright, potentially gloomy sky could be effectively incorporated with the landscape. In the past, I had to crop tightly and shoot only the lions, or live with a scene with a blown-out, unnaturally bright background.

Now, with my digital camera, I had both.

Digital photography had some real benefits here, provided you have the skills in Photoshop or Capture 1 to adjust your exposure and to composite the images. These are techniques that we cover in all of our digital courses -- both the Digital Nature Photo Courses and our Intro to Photoshop and Unleashing the Power of Photoshop (Intermediate Level) Adobe Photoshop Courses.

While this Tip of the Month deals with a digital solution, the lesson equally applies to film photographers. One of our participants was absolutely thrilled when we came upon this scene -- he wanted to shoot lions upon a kopje and he fired away with abandon. Using a handheld incident meter rather than a camera spot meter, he felt that the film would 'hold' the exposure values. Only later, when he saw my results on digital -- where the huge difference in exposure value was evident -- did he think differently.

Remember, you can't just look at the physical elements that make up a background. You must consider the light values, too, but, if you shoot digital, you have the ability and freedom to actually capture what you saw. This isn't manipulation, this is truly capturing a scene as our eyes see it, and not as the limited exposure latitude of film permits us to capture a scene. Pretty powerful stuff!