With our PnS we could take easy snaps while gorilla treking, likeI did of Mary on the trail in Volcanoes National Park
and of Kathy Morris holding a chameleon we found en route as we headed towards the gorillas;
or we could give the camera to a passer-by to take a snap of Mary and I on our first vacation,
without worrying about whether or not that person could figure out how to use our more sophisticated cameras.

How many times have you been just too lazy to snap a picture, especially of something that wasn't a 'real' photograph? How many times has it just been too inconvenient to carry along your 'real' camera? How often have you passed on a shot, or the recording of a memory, for any of these reasons? We have, too many times, but that happens far less anymore since we starting carrying along a simple Point n Shoot.

The reasons you should too are probably more than I can think of here, but consider these points:
PnS are small, and most can fit into a shirt or pant's pocket easily. Therefore, they are always accessible.
The better PnS cameras have a fairly decent pixel count 6-8 megapixels or so, which is perfectly adequate for 5x7 prints or almost any WEB application.
They're so easy to use, especially on automatic mode. This is especially helpful if you're asking someone to snap a shot of yourself, where handing over a heavy, expensive, serious-looking SLR can be intimidating. Everyone knows how to frame a PnS, and the images generally reflect that proficiency.
Our PnS has a panorama feature as well, so we can shoot a multiple sequence pano incredibly easy. In fact, the feature is so nifty I can't understand why it isn't incorporated into our SLR cameras as well. It should be! Here's how it works:
One of the Mode options, in addition to Manual, Aperture, Shutter, etc. is a Panorama. If that's selected, when the camera is fired, the first image shows up on the LCD monitor like normal. However, here's the neat part -- as you frame for the next shot, the LCD monitor shows the old image and the real-time view of the next, making it very easy to align distinctive features for an overlap. The third image is similarly aligned with the preceeding shot, and so on, until you switch Modes.

A two-frame panorama stitch simply done with our PnS

Better PnS cameras offer a RAW format, so you don't lose the creative control, and the insurance RAW offers, when using one. Some models we've seen on our recent trips were barely larger than a pack of cards, and took wonderful shots. Another model, built more like a traditional SLR, had a 1 to12X optical zoom - the equivalent of a 600mm lens -- without the dust problems. That camera made fantastic shots, and was one-sixth the weight of the SLRs and 500mm lenses Mary and I were carrying! 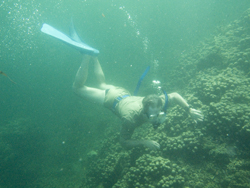 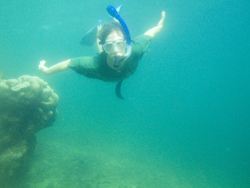 Fish; Joe; and Mary in the Indian Ocean

Our model, a Canon PowerShot 570, fits a custom Canon UNDERWATER HOUSING that operates all the camera's functions. On our recent snorkeling trip to coastal Kenya, we satisfied our 'underwater urges' with the PnS with a lot less money, weight, and headaches, as we would have had with housing our digital SLRs. I must admit that each time we snorkeled, the first thing we did was immersed the housing and watched for bubbles - hoping we'd catch a leak before we flooded the camera. The housing worked perfectly, but still, we wondered what our stress factor would have been had we been doing the same with our 1Ds or 1D Mark II cameras?

In short, using our PnS was a lot of fun, and allowed us to get shots we'd have passed on, or been afraid to make (those underwater!), had we not carried one along. Thanks goes to Steve Berkowitz, by the way, for this tip -- it was his suggestion, and he sure enjoyed using his PnS for fun shots on his safari! 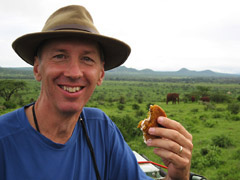 Steve with a 'whoopie pie,' a Pa. Dutch dessert Steve brought from
Pennsylvania to enjoy with the elephants (in the background, at Samburu).

Our Past Photo Tips of the Month: