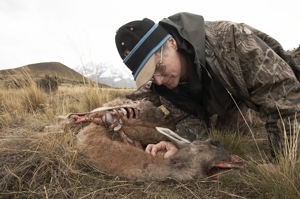 My finger and thumb are touching two of the puma's
puncture wound marks in the guanaco's neck.
Tip of the Month
Keep Your Head Up!
Literally.

Just a few days ago Mary and I returned from our latest quest, attempting to photograph wild pumas (cougar-mountain lion) in southern Chile. In four days our party of three (a Chilean friend joined us) we saw one puma and missed another by a gut-wrenching close amount. This second puma had either just made a guanaco kill or did so after I hiked passed where the cat had been lying. I am still in mental torment about that one!

On our last day of puma-searching we had split up our territory to maximize our chances of finding a cat. My Chilean friend situated himself upon a hilltop overlooking the area he'd seen a puma two days before. I dropped Mary off at another location with the plan that she'd hike towards a spot where I'd eventually reach from another departure point. Together, the three of us would be either hiking through or surveying prime puma country.

I parked the car and began hiking across the country toward some cliffs and my rendezvous with Mary. The cliffs were a half-mile or more away, and I was anxious to get into this rocky area before a cat retired for the morning. As I walked, however, I remember slowing down and thinking that there should be no hurry, that there was no sense of rushing, that I should simply enjoy the experience of being alone in this windswept wilderness. This did slow me down, but with winds often blasting across the landscape, and occasional squalls of biting rain, I may have had my head down and away from the wind as I walked.

Meeting Mary in the cliffs we returned to where I had parked the car, unknowingly retracing almost the exact route I'd taken as I headed out across this trailless ground. As we walked, still separated somewhat in hopes of crossing sign, we spotted a group of condors that had flushed from the grasses. Crested caracaras hopped about as well, sure sign that there was a carcass. We hiked over. 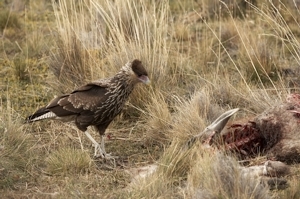 A crested caracara approaches the guanaco kill. Minutes earlier, several caracaras and nearly a dozen Andean condors had swarmed around the kill, stripping almost all of the remaining meet.

The remains of an half-grown guanaco lay in the grass, most of the meat gone from the efficient work of condors and caracaras and, I'm sure, the puma that had killed it. A twisted neck and several puncture wounds in the neck showed where the puma had made its lethal bite. With the carrion birds claiming the kill we were fairly sure that the puma was long gone, although we scoured the area thoroughly in case the puma had laid up within sight of its kill. We didn't see it, and after a search we headed in the direction of the car, which, to our surprise, was less than a quarter mile from the kill, and on in the same direction we had been heading.

At that point I doubled back, retracing a 'probable route' that I'd take to head toward the cliffs. My route was one of two -- either directly across the grasses where the guanaco lay or a hundred yards to one side where, from that route the kill would be hidden by the slope of the hill. I was now haunted with the question -- did I walk passed the puma while it lay in wait for a kill, or had I passed nearby while the puma fed, within sight had I simply looked in that direction. I'm fairly confident that I cased the area as I walked, although I did not do 180s where I'd check out the ground I'd just covered, and it's possible that had I done so I'd have seen the cat as it fed. Assuming, of course, that it had made the kill before I began my walk. Either way, the puma was either feeding or hunting, because had it already left its kill condors would have gathered and flushed as I walked by. 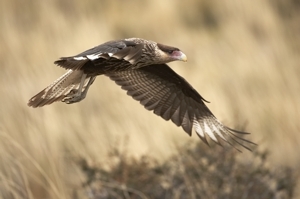 The best shot of the morning - the caracara took off and, with digital, I fired away, not worrying about whether or not I'd get a sharp shot - it's only pixels, remember. This one was razor sharp.

So, what's the tip? If you haven't figured it out, it is this: When searching, don't hurry, and don't worry about 'getting there' because 'there' can be anywhere, including where you've just passed. This bit of advice applies just as much to racing somewhere in a safari vehicle to 'find' leopards as it does to seeking pumas in Chile or looking for virtually any other subject that could be anywhere, provided you're in the correct habitat.

When in the field seeking game, walk with your head up as often as you can, rather than charging ahead to reach a destination, and you're more likely to find the subject you seek. I'll do exactly that next time, but I'm already wondering how in the world I'll cover any country as I do 360 sweeps as I hike across the landscape. It will be worth it though.