View our 2007 Participants Portfolios Too! 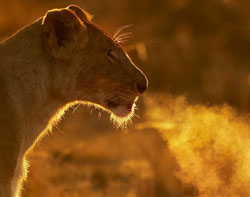 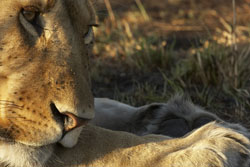 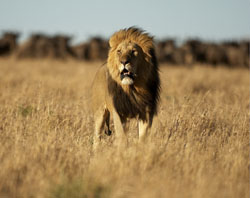 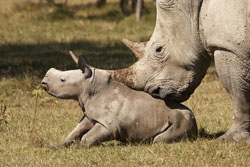 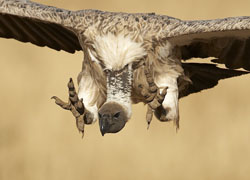 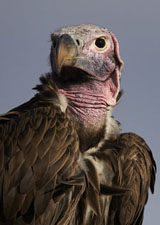 Landing gear down, a white-backed vultures swoops in to a kill; slow-shutter speed flamingos; Nubian vulture 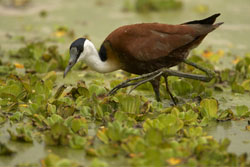 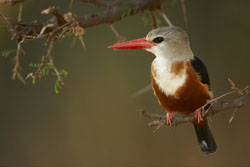 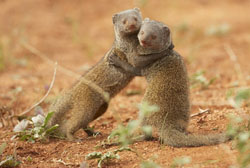 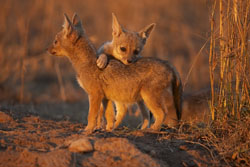 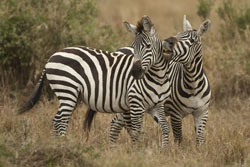 This was our 20th year of doing Kenya Photo Safaris, and during that time we've seen a lot of changes. Those changes have included improvements in safari conditions - in the vehicles, the lodging, and the food. It has also included changes in the wildlife, and nothing symbolizes those changes more than the wildebeest, or gnus, whose annual migration from Tanzania into the lower Masai Mara is now quite different than it was two decades ago, and, I could say, is better than ever.

When we first started doing our Kenya safaris, the gnu migration began some time in June or July, when gnus entered the Masai Mara from the south, and continued until some time between mid-September and mid-October. The herds, for the most part, were gone by the time that we now start our safaris, but today that migration is quite different. Although the migration may still enter the Masia Mara at the usual time, the migration may remain, in various numbers, all the way into December, or beyond. This year, for example, all Three of our Kenya Photo Safaris saw a River Crossing, although the drama of those crossings varied due to the volumn of water flowing through the Mara River during these times. 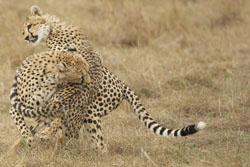 We also saw a difference in the number of cheetahs this year as well, but we don't think that's a trend or pattern as it has become with the gnus, but instead we're hoping it was just a fluke, for the number of cheetahs were down this year. We do worry about the burning of grasslands in the Mara, which is done to promote new growth, but in doing so it's also possible that cheetah cubs, born in a grassy shelter, might be killed during these burns. I'm hoping that the Mara management takes that into account.

We've also seen a difference in the people going on safari with us, and over the years, I'm happy to report, those folks have become increasingly patient, serious, and skilled. That quality, patience, is probably the most important component for having a very successful safari, for going on a photo safari is not like going to the zoo -- things don't happen on a schedule and events do happen at the unpredictable, inexplicable pace of the bush. If you're out there and ready, you might get lucky, and indeed we were extremely lucky on all three of this year's safaris. Here's some of the highlights:

Rather than recap each safari in words, I'm going to let the pictures tell the story - saving me, obviously, thousands of words per pic! Here, then, is some of our highlights! 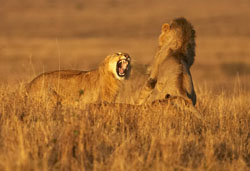 On our first safari, the big pride of lions we've watched for several years underwent a change. For several years, this pride has been 'owned' by first three, and then two great black-maned males, but as always happens, eventually their reign is challenged by younger, stronger, more aggressive males that wander into their territory. We missed the initial displacement, as the original males had already deserted the pride, but we did see the quite interesting dynamics as the lionesses began to accept the new males, and the tensions that arose when the young males of the pride were pushed out by the new-comers. In fact, during our second safari, we saw, for the first time, a lion fight, as one of the new males faced off with another subadult. The action only lasted seconds, with the new male rising onto his hindlegs and boxing with clawed fully extended, while the younger male quickly lost his nerve, and ran, with the other in hot pursuit. By the third safari the lionesses had accepted the males and were now soliciting matings, although comically the first lusty attempts of the lionesses were completely ignored. The young males, the sons of the original black-maned males, were gone by the third safari, and we never saw them again.

The river crossings are always a highlight, and this year's were absolutely unique in that we rarely waited more than an hour for a crossing to occur. All three safaris enjoyed seeing a crossing, and for the first two trips some of those crossings literally involved only a few minutes of waiting. Granted, we were lucky we got to the river when we did, but I'd prefer that to the alternative, which we've endured, while we've waited hours until a crossing finally happened. 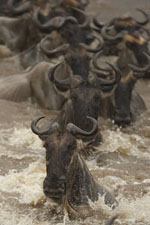 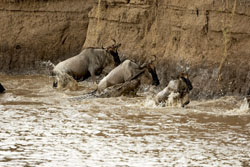 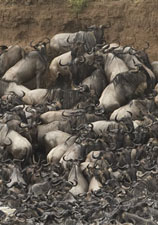 Gnu river crossing; Nile crocodile grabbing gnu cow; pile-up at the 'Mortuary'
We only saw two cheetah kills during our time in Kenya this year, although we did put in the time waiting whenever we thought a hunt might take place. On the second safari, we waited for several hours as a herd of Thompson's gazelles grazed toward a family of cheetahs, but the cats never made a move. Eventually we gave up, as the layout of the land was such that had a chase occured it would have covered ground our vehicles would not be able to reach. As it turns out, that cheetah family did not kill until late the following morning, so we were lucky we had left. 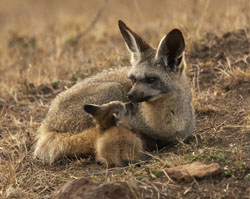 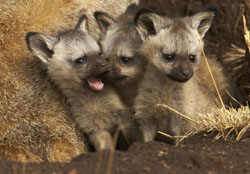 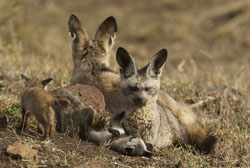 On that trip, we spent that afternoon with an extremely habituated family of Bat-eared Foxes, whose babies had just recently emerged from the den. On our first trip we noticed that the tame female was pregnant, and so stout we knew that the delivery had to be soon. She must have given birth shortly after we left for on our third trip, returning approximately two-and-a-half weeks later, the babies were born, but were old enough to venture out from the den. Watching them do so, perhaps for the very first time, was a real highlight for all of us, and everyone appreciated the opportunity. This sounds easier than it is, for it can be hard parked by a burrow, sitting there watching an adult fox or two lying about, doing nothing, while the young stay hidden inside. One must question whether or not the pups will show, whether or not you're missing something better, whether you're spending your time best. Mary and I always advise what we think is best, and in this case we felt this was an opportunity of a life-time (we'd not seen babies this small, nor a den so tame, in all of our twenty years!), so we advised people to wait. And, sure enough, at some point one of the adults, the male in every case, would get up, walk to the den entrance, and, seconds later, the five pups would storm out, swamping the male with their puppy enthusiasm. It made for terrific shooting. 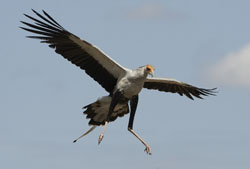 Our safaris are designed for wildlife photographers, and birds are, beyond doubt, wildlife as well, and we always encourage photographers to make the most of these exciting subjects. This year the bird coverage was the best it's ever been, and some of the best images of the trip were of birds. Some highlights - a Martial eagle killing a monitor lizard; fork-tailed drongos mobbing two different species of eagles; two different plovers shielding their newly-hatched chicks beneath their wings; vultures flying down to a carcass just a few yards from our vehicles; and a variety of perching birds photographed, during our non-game drive times, right around the lodge.

Last, I must give special thanks to Barbara Kraft, a first-time participant on our first safari, who loaned me her 500mm telephoto lens to use for the remainder of our time in Kenya. The focus on my 500mm went off somehow, and I was finding that my focus always seemed to lie somewhere behind the focus point. Since I was using the new 1D Mark IIIs, which are rumored to have a focusing issue, I didn't know if it was the camera, the lens, or me. I was missing shots, and this, honestly, was driving me crazy. On one of our last days, Mary took my lens, and I used her's, and we shot the afternoon game drive in this way to compare results. Sure enough, it was the lens, for she had the same problems, and I no longer had any with her's. Barbara bailed me out, and my shots for the last two safaris would not have been possible without her generosity. Thanks, Barb!

The portfolio's that follow will tell more about these safaris than my writing will, so enjoy them, and, if you're interested in doing a photo safari, please contact us ASAP. Our 2008 trips are full (although someone usually has to cancel and some on our wait list get on), and we're now setting dates for 2009. If the images don't convice you, read our brochure to see why our safaris fill so far in advance. 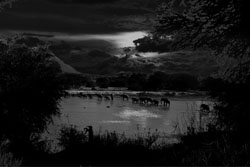 Moonrise over the river and elephants - digital illustration
Contact us by e-mail: info@hoothollow.com
Or Call or FAX us at: (717) 543-6423.