View our 2006 Participants Portfolios Too! 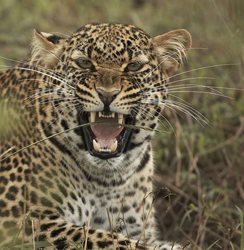 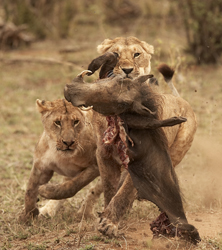 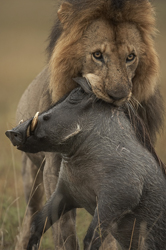 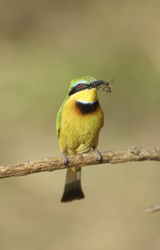 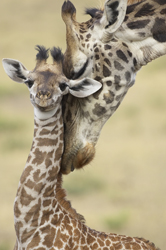 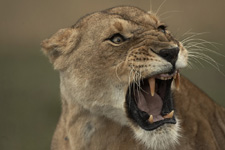 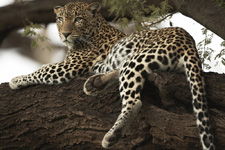 Patience.
During our safaris first orientation meeting, when first impressions are most important, Mary and I want to impress upon everyone the importance of being patient, of letting things happen, of not rushing and of letting the African tapestry unfold before our eyes. This year's groups followed that advice to the letter, were wonderfully patient, and were rewarded with some truly spectacular sightings of behaviors across the spectrum, from walking catfish spawning up a savannah seep to African lions contesting a fresh warthog kill. While exhibiting patience might erroneously imply wasting time and missing other valuable shooting opportunities, the reverse is actually true. Having patience allows us to see it all with quality, not merely ticking-off subjects but instead actually getting wonderful, intimate moments where we see the birds, mammals, reptiles, and even fish actually going about their daily lives, their daily dramas. Doing so does not cost us in field time, for a wise safari-goer knows that everything will come ... if you're out there, and if you're patient. This accompanying portfolio, as well as a collage of our 2006 Kenya Photo Safaris participants' work, will give you some idea of the depth and scope of the safaris -- they were great trips!

Rather than recap each safari in words, I'm going to let the pictures tell the story - saving me, obviously, thousands of words per pic! Here, then, is some of our highlights! 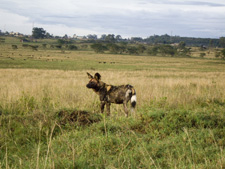 We had heard reports that African wild dogs had been seen in Lake Nakuru NP, but on two previous trips they had eluded us and, quite honestly, we didn't expect to see one. One afternoon, several of us skipped a game drive to visit the home of one of our driver-guides, an old friend whose family we visit every year. Since we were skipping the game drive we left our serious equipment behind, and the four of us had only Point-n-Shoot cameras or short lenses for family-type shots.

Imagine our surprise when, just inside the Nakuru gate, we spotted a wild dog sitting right beside the road. The shot at left was handheld with our little Canon 570 PnS at its full telephoto extension! I was so surprised and excited to see it that I didn't notice the camera battery compartment had opened and the camera wasn't working. Mary noticed, corrected the situation, and I snapped the shot! 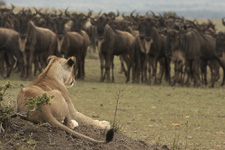 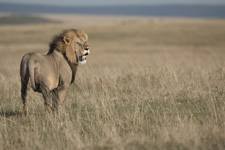 Left:We had a huge number of lion encounters. Telephoto compression makes these wildebeest look closer than they were, although they were still quite close. However, if a prey animal spots a predator, the game is usually up and the lions know it -- they give up on the hunt.
Second, Left: Although this gnu looks doomed it survived the lion attack. At the instant before the lioness would have leaped onto the gnu the male gnu spun and faced the lioness. She stopped in her tracks, and the gnu charged her, chasing her off. After a few yards the gnu stopped and tried running away, whereupon the lioness charged again. The gnu spun and charged, and the lioness retreated. This continued for five or ten minutes until the gnu wore the lioness out and the exhausted lioness gave up the chase.
Third, Right: This spectacular male lion is not majestically surveying its savannah kingdom. Instead, it is out-of-breath, looking over its shoulder for the Masai herders that had intruded into the protected Mara Reserve, looking for a lost (and perhaps dead) cow. This powerful male trotted at least a mile to flee the scene. Had it not, the lion may have been speared by the Masai as a cattle killer. This is not culture, this is criminal activity, as the Masai Reserve is not cattle-grazing grounds but a game reserve, and killing a lion (and we have seen this happen!) is not only illegal but a tremendous waste of a precocious resource, representing a lot of tourist-generated income.
Far Right: This lioness had fled across the flooded Talek River to flee the Maasai. Here it is within seconds of swimming back across the river to find her less-than one-month old cubs that she had been forced to desert earlier. We'd never seen a lion swim a river before but she did so effortlessly, and her cubs were still alive when she returned. 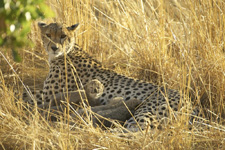 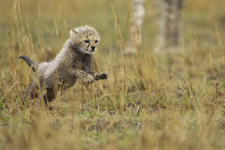 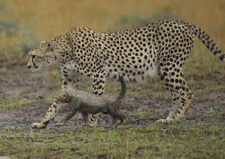 We had one of the highest cheetah counts in a long time, including a mother cheetah with five of the youngest cubs we've ever seen. 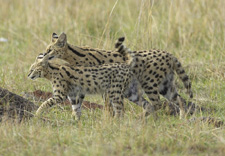 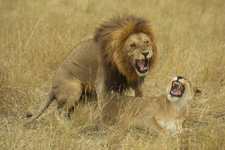 Left: A pair of male cheetahs were active around the Serena area, and one day we found them just minutes after they had killed a young zebra. After feeding for a time a male lion caught the scent and, from hundreds of yards away, bee-lined directly to the kill, stealing it from the smaller predators. The next day we found the cheetahs before they hunted and were there when the two captured a young wildebeest that was wandering, alone, across the grasses.
Middle: In the same area, a month later, we discovered a Serval mother and kitten -- the first time we (or our guides of 75+ years collective experience) had ever seen this!
Right: Each trip we had luck with mating lions, which always has the potential for violence at the conclusion of the act. 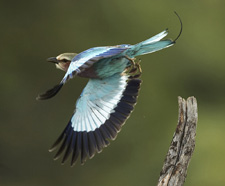 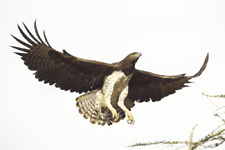 Birds were great, as usual.From Left to Right: Lilac-breasted Roller; Martial Eagle returning after an unsuccessful series of stoops on a baby Dik-Dik; a pair of courting Secretarybirds at the nest; a very cooperative, preening Pigmy Falcon, the smallest raptor in Africa. 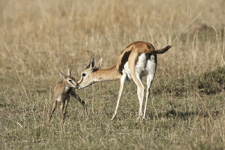 While the predators always seem to get the headlines, all of the herbivores are photographed as well, usually representing over 20 species. This year, for example, we photographed Gunther's Dik-Dik, Kirt's Dik-Dik, Oribi, Klipspringer, Reedbuck, Bushbuck, Defassa's Waterbuck, Common Waterbuck, Eland, African Buffalo, Impala, Gerenuk, Thompson's Gazelle, Grant's Gazelle, Reticulated, Rothchild's, and Masai Giraffes, Common Zebras, Grevy's Zebras, Warthogs, Black Rhinos, White Rhinos, Hippos, and Elephants, and I'm sure I'm missing more than a few. Above, Left to Right: Reticulated Giraffe shaking red-billed oxpeckers from its head; a standing Gerenuk grazing on twigs before the rains; a minutes-old Thommie baby being cleaned by mom; and a Gnu river crossing - along the Talek River, the first time we'd seen that event here! 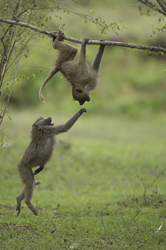 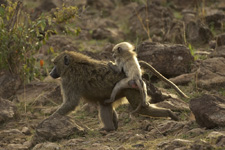 Babies are always a hit. We spent over an hour following a trio of Black-backed Jackal pups as they played, running back-and-forth across the Mara; while Mary captured some incredible play sequences with Olive Baboons and a rare blond-colored baby. We wonder if that baby's color will change as it grows older. 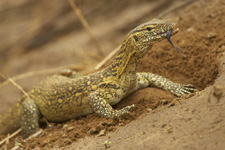 This was an El Nino' year, so we had unusually wet weather for the short raining season. Even so, however, each safari only 'lost' one game-drive because of heavy rains, but the shooting that resulted was worth that cost. Short rains mean more cloud cover, so the light stays soft and the temperature cool, and animals stay active far longer -- sometimes all through the morning. Birds explode into breeding frenzies as the rain sprouts new growth and an abundance of food. We saw, for the first time, walking catfish walking across the saturated savannah black cotton soil to spawn in isolated breeding pools. We'd always wondered how catfish appeared in these isolated ponds in the middle of the Mara and now we know for sure -- they walk there! Nile and Savannah monitor lizards and leopard tortoises, materialized after their drought-induced estivations, and the cloud formations, and scenics, were just incredible.

As I write this I'm home less than one week from our 10 weeks of travels, but today we were notified about some wild dogs spotted in the Serengetti. I might be going back within weeks ... Mary and I can't get enough of Africa and we hope you'll join us again for one of our future shoots. There is nothing like it, truly the greatest show on earth.