It has been almost 18 years since I've last seen Churchill, Manitoba, 'The Polar Bear Capital of the World.' Back then, I was leading some photo tours for another company where I shared a tundra buggy, the large, specially built vessel that rolls across tundra or frozen lake, with twenty or thirty people with varying levels of enthusiasm. While those trips were fun and somewhat profitable, they were immensely frustrating as well, as the average tourist on a tour often lacks the patience to sit and wait for activity to happen. 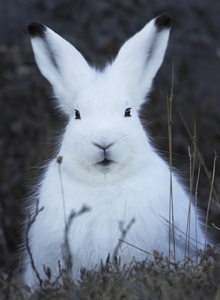 So it was with a great deal of enthusiasm that we joined our friends Don and Joan Getty who had organized a photo trip to Churchill comprised only of specially invited guests. All of the participants, as it turned out, had been former participants on one or more of our own photo tours, so many of the people already knew one another, and we, like Don and Joan, knew them all, and every one was either a die-hard photographer or the accompanying, and very patient, spouse of that photographer! Even better, a buggy that may house 40 people at full capacity hosted only 13 of us, with every shooter having a window on either side of the buggy (excepting one window, one side, which Mary and I or Mary and Ken shared -- and that certainly was not a problem, either!). Last, on a personal note, it was quite a difference for Mary and I to be able to enjoy the hard and very competent work of another leader who organized every aspect of the tour, and where Mary and I could simply sit back and relax. Don and Joan did a stellar job, and we thoroughly enjoyed every aspect of the trip.

Eighteen years. What would the experience be like after all that time? How has Churchill changed? How bad, how crowded, how touristy would the area be? All these questions were on my mind as we flew into Churchill, which I found had hardly changed at all. Granted, there were more restaurants -- many more, and the food was one heck of a lot better, and more diverse, than it was 18 years ago. And expensive, too -- resort prices at most of the restaurants, but most of the meals were excellent. There were a few more gift shops, a few more motels, but overall the town was pretty much as I remembered it.

This was NOT our group! But it is what you could experience if you simply booked a buggy!

The tundra buggy situation was a bit different. There were now two 'lodges' or seasonal settlements on the tundra, one run by Great White Bear and one by Tundra Buggy Tours. Both were large complexes of several buggies strung together, offering sleeping quarters, meeting areas, and a dining area. We did not stay at either one, and we're very happy that we did not. We had a great driver who didn't mind leaving early and staying late, so we enjoyed the same great light that the lodge people had, but without any of the inconveniences. We were told that each company could have only 7 vehicles on the tundra at a time, for a total of 14 between the two companies, but except for one day we never had a bear jam where virtually every buggy was congregated at one spot. It did happen -- at least 10 buggies were parked in line to watch a pair of bears wrestle on one afternoon. One of those buggies present, "Gabriel," was a monster buggy that seated 50-60 people, and every seat was full. I image serious shooting on that buggy would have been a bit problematic!

Because of our hours, we were usually on site before, and remained long after, almost every other buggy, and consequently we had wonderful flexibility in positioning ourselves. Because some of the most dramatic imagery was of animals in the landscape, or polar bears wrestling, we did not have to be close, so even though 10 photographers were lined up in a bus-sized vehicle, everyone had a great angle for almost every situation. Actually, the longer the lens, the better off you are in Churchill, since a greater working distance flattens the perspective so that it doesn't appear as if you are elevated and looking down on a subject.

While we all carried tripods, Mary and I rarely used our's. Both of us shot from the back deck of the buggy a few times, but most of the time we simply used our MOLAR BAGS as our lens support. A few also had, or only had, car window mounts which worked, but not nearly as effectively as did the molar bags. We filled our bags with beans we obtained in Churchill, and the bags, when full, formed the most secure platform I've shot from, and that's even without the Module One brackets (from Wimberley) that I usually use. We didn't bring the Modules along this time because of the weight limitations imposed by the airline in flying to Churchill -- so we went with the bear ... err, bare minimum.

However, there was one huge difference between my trips 18 years ago and now. There was no snow. When we arrived in Winnipeg, the last stop before the flight to Churchill, we learned that the area was unusually warm, and although there had been a snowfall early in the month it had since melted. In Churchill, many of our days had highs slightly above freezing, whereas years ago -- and only two years ago when Don was last here -- the temperature sometimes dropped to -20! Consequently, the bears were rather lethargic, and most wrestling occured either early or late in the day until our final day, when the temperature finally dropped below freezing and the bears played sporadically throughout the day. This warming is, we all hoped, only an anomaly, but there certainly has been a warming trend over the last 18 years that I personally have seen. Back then, tours ended around the beginning of November, as the Hudson Bay froze around that time and the bears left for the ice immediately. Now, tours are scheduled into the second week of November, although that is at some risk for on Don's last trip freeze up, as the freezing of the Bay is called, occured before he arrived and there were virtually no bears on the tundra!

This warming trend, however, bodes poorly for the bears, especially for the pregnant females and those with cubs. Pregnant females den early and for a good part of the seal-hunting season are confined to their dens where they await and then tend their cubs. Over the last twenty years or so the average weights of female polar bears have decreased, as has the average number of cubs, and if this warming trend continues this will impact upon the bears even further. It is quite possible that within our lifetimes the Hudson Bay population of polar bears could vanish, for if the ice forms too late and melts too early, vulnerable females simply will not be able to catch enough seals before they den to successfully raise their cubs. That, my friends, is a frightening thought. 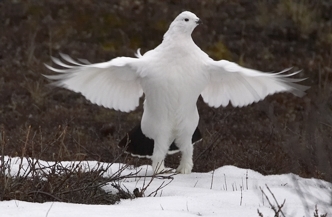 But until then, Churchill is still one heck of a show. In addition to the polar bears, we also photographed Willow Ptarmigan, Arctic Fox, Common Ravens, and, at least for me, a Snowy Owl. We had great luck with the Northern Lights on our first evening, and because the temperature was so unnaturally warm we could be out for hours filming. Normally, photographing the Northern Lights is an exercise in endurance, as the wind and cold makes staying outside at night almost impossible.

In fact, we had so much fun that we're going back, and we're hoping to organize a special Photo Tour to Churchill in October of 2007. Why so far away? Because Churchill is so busy, it's virtually impossible for a group to 'get in' with only one year's notice. The group, of course, will be limited to only 10 photographers, so that's 8 other shooters and Mary and I, and whatever non-photographing spouses that wish to share their spouse's windows. We anticipate this Tour will fill very, very quickly, so if you are interested after reading this, please contact Margie at our office ASAP. 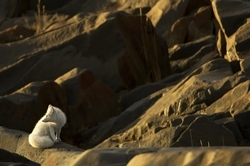 However, we may not do Churchill ..... Ironically, on our first day back in the office after this trip we were contacted by a lodge that is also located on the Hudson Bay but where photographing is done from ATVs, vehicles, or from behind a fence where you are SHOOTING THE BEARS AT GROUND-LEVEL. I've already been in contact with the outfit and, if things pan out, we may go there instead, or as another polar bear trip earlier in the season. Keep checking our website for more details.

Last, we have to again thank Don and Joan Getty, and also our wonderful BedNBreakfast host and hostess, Gordon and Lynn Martens, who made our stay in Churchill so enjoyable, so much fun, and so comfortably homey. Don and Joan did a stellar job of organizing everything, and Gordon and Lynn made our off-times equally rewarding, and we must thank them all. As for the rest of the folks we traveled with -- well, it couldn't have been a better bunch and we enjoyed our times together immensely. Thanks to all! 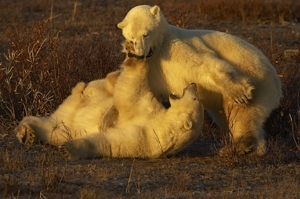 From left: Arctic Hare scratching and relaxed at minimum focus with a 500mm, and on foot, too! A polar bear stands
upright to investigate an open window - pull in those beanbags! Two bears play-fighting/wrestling in the early morning light.
Bottom: More wrestling, with one (right) already donning a laurel wreath of victory. 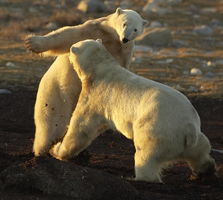 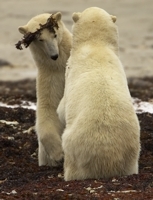