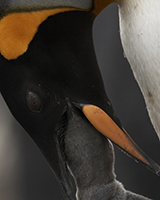 A waterfall, the result of iceberg melt; Tabular Icebergs off the peninsula; King Penguin feeding a chick.

One of the greatest and most breath-taking wildlife spectacles in the entire world, and certainly among the top ten bird experiences worldwide, is the incredible concentration of nesting King Penguins on Salisbury Plain on the island of South Georgia. Here approximately 100,000 pairs of Kings nest, covering the flats and sweeping up a barren mountain slope for a hundred feet or more. Along the shoreline, thousands more gather, returning from or entering the sea to feed, their sea-washed white breasts and bellies gleaming in the sunlight. Along the edges of the colony, a cacophonous symphony of bugling, honking cries bombard the senses as birds raise their beaks skyward, proclaiming territory, attracting mates, or simply celebrating life. Snow and glacier covered mountains surround this stadium-like colony, while the gently rolling grassy plains nearby host so many hauled-out Antarctic fur seals that, from a distance, the scene is reminiscent of the Serengeti. 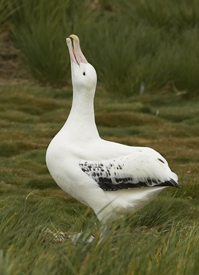 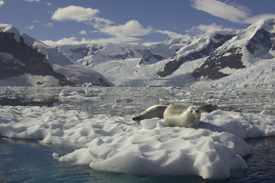 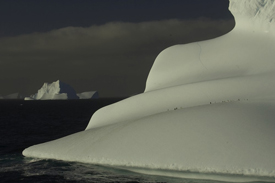 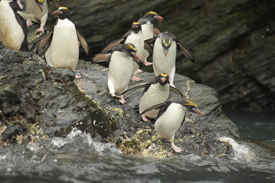 Macaroni Penguins from the zodiac.
Mary and I were visiting South Georgia as part of a team of fourteen leaders assembled by Joseph Van Os Photo Safaris/Travel Wild for this very special cruise. Many of you reading this may know that JVO and ourselves are competing companies, both offering photo tours and safaris, so you might find it odd that we were working together. Many years ago I did some tours and workshops for Joe (JVO), and we've been friends and friendly competitors ever since, so teaming up for this trip wasn't really that extraordinary. What was different, and far more so, was the fact that Mary and I were not in charge as, of course, we'd be on our own trips and, quite frankly, being relieved of that responsibility was a really pleasant departure for us. The trip logistics were great, Joe's leadership was terrific, and, most importantly, his heart and dedication for getting his participants to the right spots at the right time was sincere and enthusiastic. The team Joe assembled was first-rate, with many world-class experts on natural history, photography, and Arctic and Antarctic lore and travel, so we also learned a lot while also having a really good time. Would we do it again? In a heartbeat. It was a great experience and the photographic opportunities rival that of any of the best shooting locations in the world.

Gentoo Penguin chick chasing an adult for food.
The images speak for themselves, so I'll limit our scouting report to the most noteworthy highlights. One of these simply has to be the sea crossings, for our ship, the Vavilov, was specially designed for smooth sailing with its hydraulic water stabilization system. Traveling to South Georgia, or to and from the Antarctic Peninsula crosses the roughest seas in the world, the Southern Ocean where currents travel unimpeded literally around the globe. Crossings can be horrendous, with swells or crashing waves of twenty to forty feet, so pitching a boat that any semblance of a normal existence is forfeited as one simply tries to stay healthy. The Drake Passage, the open water between the Peninsula and the Horn of South America is infamous in this regard, but its fame, or infamy, is simply due to the fact that this particular stretch of water has a name. The other sea routes are not named or less well known but can, assuredly, be just as rough. 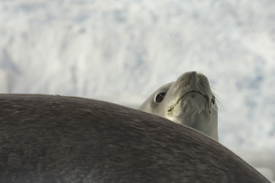 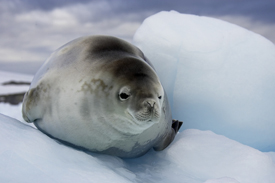 Crabeater Seals shot from the zodiac with 28-300mm lenses - close! 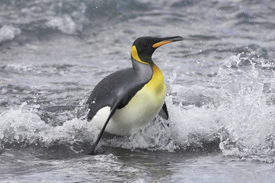 Orca or killer whale approaching our ship.
But they were not. On our only real passage through the Drake on one of the two days the seas were so calm that the ocean was like a lake, and like an inland lake the seas were devoid of seabirds. Albatrosses, petrels, and other sea birds need a wind to fly effortlessly and effectively, and on calm seas the wind is still or nearly so, and the skies were empty. On our second day in the Drake the winds picked up sufficiently for Royal, Wandering, Black-browed, and Gray-headed Albatrosses to join us, preceding an Antarctic Low that blew in after we safely reached the sheltering coast of South America. Sailing to South Georgia we had seas sufficiently choppy for the birds to fly but smooth enough that most passengers were unaffected. Can't get much better than that!

Black-browed Albatross launching into flight.
We hadn't been to the Falkland Islands for a few years (we've done several two-week Photo Tours here) and it was great to be back, seeing some of our old friends from the Falklands at Saunders Island and at Carcass. While the scenery is muted compared to our other destinations, the bird shooting is extremely diverse and worthwhile, and we filmed Rock-Hopper, King, and Magellanic Penguins, Striated Caracaras, Kelp and Upland Geese, Black-browed Albatrosses, Magellanic Oystercatchers, Patagonian Crested Ducks, and more. We had hoped to land on Steeple Jason Island, home to the largest colony of albatross of any species in the world, but the seas were rough and a zodiac ride, let alone a landing, would have been extremely unsafe.

Giant Petrel killing a Gentoo Penguin chick while King Penguins look on.
One of the risks of any cruise to these southern regions is the chance that the weather may prevent a landing anywhere. Whether it's true or not, one friend of mine told me of a cruise his friend was on that failed to land anywhere. That seems hard to believe, in a probability sense, but the zodiac landings do require cooperative weather and, for the most part, we had great luck. Unfortunately, where our luck failed was at two of our most anticipated landings - Steeple Jason, in the Falklands, and St. Andrew's Bay, on South Georgia. Both locations, however, have rather problematic landing sites where there's some risk of injury on slick, algae-covered rocks or wave-crashed shores, so for the safety of our group we may have been blessed. With the exception of those two, our landings were wonderful and uneventful. 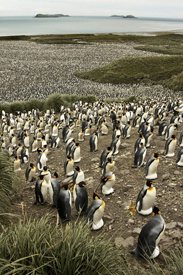 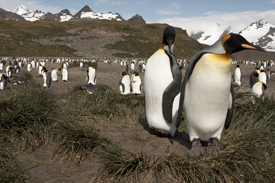 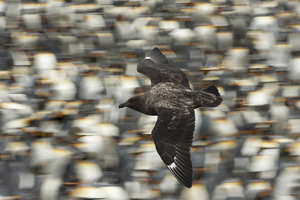 The island of South Georgia is, for most, THE southern destination for photography. Wildlife abundance is at a peak, with huge numbers of King Penguins, Southern Fur Seals, Macaroni Penguins, as well as two nesting albatross species, and misplaced Chinstraps and other seal species. Part of the appeal of South Georgia is the landscape, not as spectacular as what we'd later find on the Antarctic Peninsula and the iceberg-covered bays, but offering a rugged Ice-Age atmosphere of rugged mountains, glaciers, catabatic winds, and continuing changing skies and light. We spent six days in South Georgia, landing somewhere each day.

In some ways the Antarctic Peninsula could be thought of as an anti-climax, as going to the Peninsula is as much a requirement to collect the most remote continent as it to visit another shooting location. However, the diversity of the locations we visited made the Peninsula a third true highlight of the trip, and for several reasons. Chief amongst these was our visits to two different iceberg-covered bays where giant, Rhode Island-sized tabular bergs stretched to the horizon. Sea ice coalesced almost into pack-ice, and observing this one can understand how ship's like Shackleton's Endurance could be trapped for months. Indeed, at one of our Antarctic landings ice and mini-bergs from a miles long glacial wall threatened to entrap our zodiacs as the winds shifted and blew the ice to shore. On that same day a monstrous calving occurred, creating a mini-tsunami that swept over the beach, fortunately after all but the last, staff-filled zodiac was preparing to leave. Mary and crew ran for their lives, following a wise group of Gentoo Penguins that, despite their life in the sea, raced to high ground as well. We'd been warned about this possibility and photographers were warned to always have their gear with them in case, but despite this we saw many photographers carelessly leave and desert packs along the shoreline. Luckily for them the wave hit after they had left the beach.

Gentoo Penguin overlooking an iceberg-filled bay.
Perhaps because of global-warming, or perhaps simply the anomaly of an early Spring, Adelie Penguins had completed nesting and we saw very few, something of a disappointment for this tuxedo-clad bird is iconic for the Peninsula. However, their nesting island, while nearly devoid of penguins, still proved to be one of the best shooting locations for the trip with wave-sculpted beached bergs, an active colony of King Cormorants, and a photogenic group of Antarctic Fur Seals that lounged along the shoreline, framed by glaciers, bergs, and mountains.

One of the most pleasant surprises of the trip was the diversity. Each island, each landing had a 'star,' a principle attraction or highlight, but as often as not that attraction was overshadowed by a totally unexpected subject that offered even more exciting photography. Some examples -- the beautiful blond Fur Seals on the Salisbury Plains, the Minke Whales in the Lemaire Channel, the fighting Giant Petrels on a foggy beach, and innumerable others. 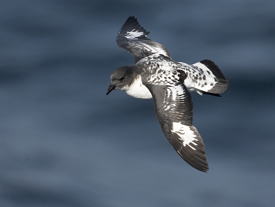 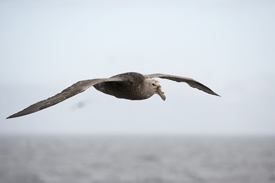 For some, the great South -- the South Atlantic Islands and the Antarctic Peninsula holds a fascination and a lure just as it did for the early explorers of the beginning of the twentieth century, explorers like Scott, Shackleton, Amundson, and more. Some of the participants on this voyage had done two and three previous trips and almost all of them intend to return again. We'd certainly love to, but even if we don't we would have to say that a visit to the great South, to Antarctica and South Georgia Island, is a journey every serious wildlife photographer should do at least once. It's an adventure and a tremendous photographic opportunity.