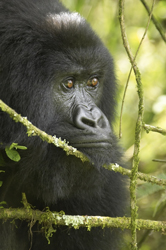 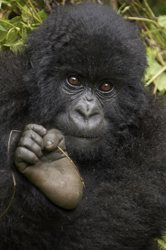 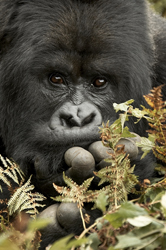 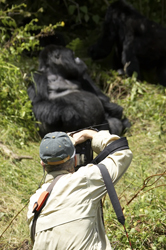 Of all the wildlife experiences Mary and I have had, I doubt if anything compares to those we've had in Rwanda with the spectacular Mountain Gorillas. There is nothing like the intimacy one feels in being so close to, and so accepted by, an enormous wild animal.
And enormous is the operative word, as an adult male, called a silverback because of the gray-white hairs that form a distinctive saddle across its back, may weigh 450 pounds. Watching one, from just yards away, as he grabs a bamboo stalk four inches thick and snaps it effortlessly in half, one should feel humbled, for a silverback so inclined could separate your head from your shoulders as easily as you can pluck a grape.

The possibility of being maimed is probably in everyone's mind the first time they're close to a silverback, but any fear one has generally vanishes after observing a gorilla or a family group for any length of time. In Rwanda's Volcanoes National Park, as in the Congo and Uganda parks, several gorilla families have been habituated for tourism, and these gorillas go about their daily activities either as if you're not there or, more likely, as if you too are a part of the group.

Gorillas are intelligent, and are of course completely aware of your presence, yet most of the time they simply behave as if you are not there. Most times, as a gorilla observes proper gorilla etiquette, a gorilla will not look directly at you, but instead simply looks away or passed you. Juveniles, still untutored in such ways, are more likely to give you a direct stare, as they are also more inclined to move in close and attempt a slap or pat. Still, on occasion a silverback may give you a direct stare, and when they do, it's a bit unsettling. 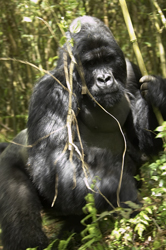 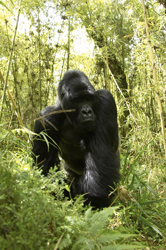 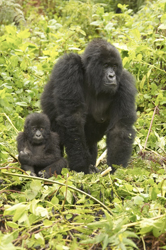 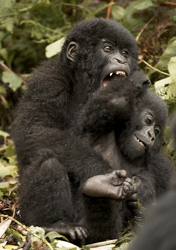 A Silverback bashing a stand of bamboo; Another Silverback walking down a trail, directly towards Mary who snapped this while
lying on her belly on the same path; mother and baby; and two juveniles wrestling - usually a shapeless moving ball of black fur!

This year, Mary and I completed our 35th gorilla trek, having now brought 7 groups to Rwanda for 5 days of trekking. We never grow tired of the experience, and with each visit we see and photograph new behaviors. Each visit lasts only an hour, which may seem like a short time in a 24 hour day, especially when one travels halfway around the world to be here, but the hour can be the most intense hour of your life. We have always done 5 treks so that we can maximize our chances of having a stellar day of photography at least once during our stay. Sometimes we're lucky and every day is spectacular, but it is also possible that gorillas could be in thick, dense bamboo, or heavy rains may blow in or, even worse, bright sun may dapple a forest in harsh contrast. Having 5 days of shooting helps insure we have a shot at great images. 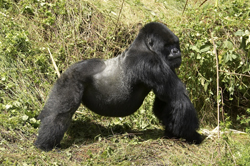 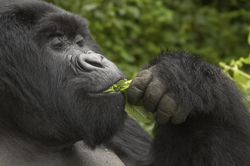 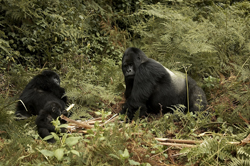 The distinctive 'silverback' of an adult male Mountain Gorilla; another silverback making a 'salad' of bamboo and greens; Family group.

This year's trips were, as usual, extremely rewarding, and on our first trip virtually every day offered ideal shooting conditions--cloudy bright light--that lasted throughout the hour. Only once, in 10 days of trekking, were we caught in rain, and even then that happened after our shoot was over.

The trekking was easy, too, at least for the most part. We always rate the difficulty of our treks on a scale of 1 to 10, with 10 being the most difficult we've had, and this year, on what was supposed to be an easy trek, we had what we'd rate as a 7 or 8. Most treks, however, were in the 2 to 4 category, which was little more than a good hike. Lucky for us, for on the first trek Mary was just recuperating from a broken ankle she sustained a month earlier in Yellowstone, and on the second trek I hiked with a bad knee, so at one point or another neither one of us was 100% but the hiking, obviously, wasn't that bad. 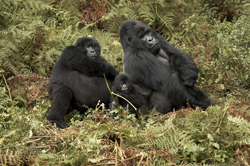 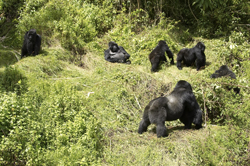 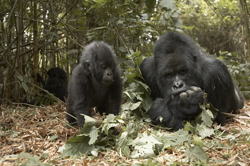 Initimate views of the families

That said, however, if you contemplate doing a gorilla trek we'd urge you to get into hiking shape beforehand. Having observed 7 groups of people, comprising 30 different individuals, we can safely declare that those who were fit had little trouble trekking. Being overweight isn't as big an issue as being fit, but some folks have deluded themselves into believing that climbing a flight of stairs once a day would get them into shape. No, walking a mile or more per day, and/or doing several flights of stairs at one time gets you in shape for trekking, and those that do so have little trouble. 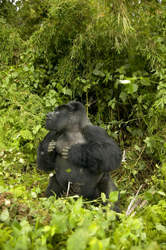 Seconds earliler, this silverback had pursed his lips and hooted, a clue to a fearsome display of chest-beating as the silverback stood and charged passed us. This happens fast, and while we've seen several silverbacks chest beat and 'charge,' running upright for a few seconds, we still haven't captured our dream shot -- a straight-on charge! However, using the word 'charge' implies an aggression or dangerous situation for a photographer, which is not true. These charging/chest-beating displays are directed towards other gorillas, not to the human on-lookers.

In our 10 hours of viewing this year we had too many highlights to recount. Although our gorilla-watching is supposed to take place at 7 meters or more away, the gorillas don't always follow the rules and approach much closer, sometimes causing some real exciting moments. This year, for example, a silverback with a brand new habituated group materialized from the brush at the edge of a clearing where our camera porters had just dropped our gear. FYI, on treks, porters carry our camera backpacks and tripods until we reach the gorillas, where we gather up our gear and proceed a short distance further to meet the gorillas. Normally, the porters have no contact with the gorillas, and normally, we walk at least a few dozen yards before we find the troop. At any rate, when the silverback appeared we were all getting our gear together in preparation for the shoot. The gorilla paused for a second, then in a surprisingly fast move, ran through us, slapping or punching one of our group with a hand or forearm with enough force to propel her into the person next to her, who then toppled into me with enough force to flatten me into the brush. Although there was an initial shake-up and worries about injuries, no one was hurt and, in retrospect, that violent encounter was one of our most memorable experiences.

Why did the gorilla do it? Who knows, but this particular silverback has a new group, and perhaps has a desire to assert, to everyone, that he is indeed the boss. Later that day he almost knocked another person over - again, right next to me, and from my position - with my legs wedged between the limbs of a fallen tree - I worried that if I got pushed my legs would bend in ways nature hadn't designed. That made for some tense seconds, but exciting ones.

In recounting this story I am not trying to paint a picture of danger or of threat, and certainly not one of daring-do adventures on my part, for gorilla trekking and watching is generally such a benign experience one feels a sense of oneness with these animals, a peaceful, special time that, as I said, I've never experienced with any other animal. But there are personal moments of excitement and perceived danger (whether real or imagined), and these, for me, certainly spice up a trip! 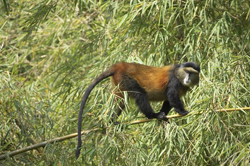 We also did a trek to see the colorful and unique Golden Monkey, that inhabits the thick bamboo cover of the lower slopes of the Volcanoes National Park. Like the gorillas, the monkeys are habituated, but unlike their larger cousins, the monkeys move constantly and photographing them was a real challenge.

On each tour we also traveled through the beautiful Rwanda countryside, photographing the landscape and the people. Rwanda is often called the Switzerland of Africa, for this land of a thousand hills is a tapestry of slopes, mountains, terraced hillsides, and most photographers remark that they could spend an entire week here just photographing the landscapes. The people are wonderful, and working with, and photographing, the people always ends up being a secondary highlight - just as important and interesting and doing the mountain gorillas! 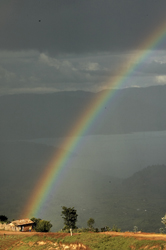 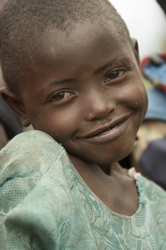 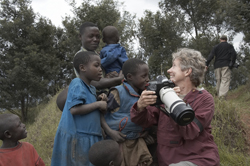 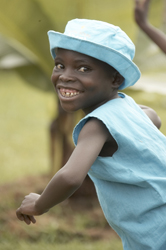 One of our trip highlights is touring the countryside, photographing the landscape and the people. Seconds after shooting this rainbow we were enveloped
in a heavy rainstorm, although the sun was still shining upon us!
Next year, 2007, we have just one Rwanda Mountain Gorilla tour planned, which is a real disappointment for us but our travel schedule was just too tight to squeeze in two tours. As I write this we have one spot left for next year's treks, and if you've read this far, you really should consider doing it. Truly, there's nothing like this unique, intimate, and exciting wildlife experience.
Contact us by e-mail.
hoothollow@acsworld.com
Or FAX us at: (717) 543-6423.

Return to HomePage. or to photo tours general information.