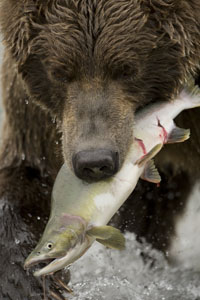 Since it was almost 5 years since we had last photographed the brown bears, or coastal grizzlies, of Katmai National Park and we had done so, then, using film cameras, Mary and I were very excited to return to Katmai with our digital cameras, shooting a whole new collection of images with a new medium. It can and usually does rain along the Alaskan coast, and we were looking forward to shooting bears with whatever ISO speed we required. Both Mary and I were using the new EOS 1D Mark III camera, with 10 fps and a buffer of nearly 28 shots, and we were excited to put the camera through its paces. We were not disappointed on any front -- the bears, the boat, the food, or the camera. To sum up the trip in just one word -- spectacular!
Left: Mary is in the foreground, the bear in the background.

Often, when one thinks of Katmai one associates that with Brooks Falls, which is in the interior of the Park and is best known for the iconic images of brown bears standing at a waterfall snatching salmon as they leap up stream. If you've been there you also know that Brooks Falls is heavily managed, and the Park Rangers control the large crowds to keep them out of harm's way. Katmai has another side to it and that's the coast, accessible only by boat or (for day trippers) by float plane, and here, on the coast there are few people, no park rangers, and a lot of photography freedom.

We did two back-to-back trips to this beautiful and remote Katmai coast, starting at Geographic Harbor for our first trip and ending at Hallo Bay, and reversing that schedule for the second trip. In mid to late August pink salmon are running the rivers to spawn and the bears gather at the various streams' mouths or along the shallows to snatch salmon. Hitting two locations, Geographic Harbor and Hallo Bay, gave everyone the potential for several different settings, but the weather for trip one went south and we were unable to land at Hallo Bay because of storms.
Left: A 28-300mm scenic of Geographic Harbor as a bear passed by.

Fortunately, though, we had had great weather and great bears at our first locale, Geographic Harbor, and no one was disappointed with being weathered out at Hallo Bay and having a rain day. On trip two the weather cooperated a little better, at least for that area, although we also had to sit out a day at Geographic Harbor because of heavy rains. The second group was a bit antsy about waiting at Geographic Harbor for better weather when a dozen bears were in view, but we assured them that it'd be worth the wait -- ISO 1000 and shutter speeds no greater than 1/125th aren't the best for stopping active bears, and they found the wait worthwhile. The shooting was incredible, as this portfolio should illustrate. 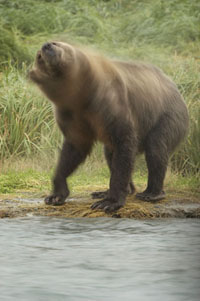 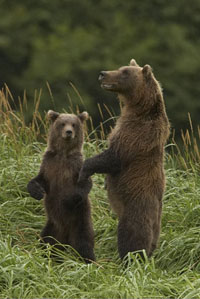 Above: A whole lot of shakin' goin' on - bears shaking off water after a dive for salmon; Mother and cub
checking out a potential threat; Sometimes we had bears feeding upon salmon within 30 feet of us, and
virtually every day we could shoot we had almost continuous activity.

Both trips offered some added bonuses. On trip one, the seas were calm enough to allow us to take our landing skiff to the open ocean where we cruised around a series of small haul-out islands where Steller's sealions had gathered. We were getting frame-filling shots with our 300mm's, and zoomed back, wonderful shots that included the mountain backdrop of Katmai as well. On trip two, we spent an afternoon with Tufted and Horned Puffins, shooting over 10 gigs as the birds flew by our skiff or returned to a nearby rock pile to roost. Although we had heard reports that the Mark III's AF wasn't reliable, we had no problems other than the fatigue induced by trying to frame a flying rocket (a puffin) zipping across the sky. We were very happy we had our Wimberley gimbal tripod heads along -- otherwise following the action would have been impossible.

The Steller's sealions and the Horned and Tufted Puffin shooting was a real bonus, and a trip highlight.

We used two lenses for the entire Katmai shoot, a 500mm F4 and a 28-300mm zoom. One Nikon shooter had his 200-400, which is the perfect lens for bears, since individuals would often come too close to fit within the frame with the 500mm. We all packed flash, but no one, in either trip, ever bothered to use it except for happy snaps of the cabins, meals, and crab-fishing.

There was only one negative to the trip and that was the food - it was so good that we all gained weight! For example, one evening we were supposed to have barbeque ribs but the boat's crab pots were full so we had an incredible banquet of both snow crab and ribs -- the ancient Romans had nothing on us!
Left: Eric, the cook and first mate, with one of the huge Tanner crabs, one of a string of memorable meals.

This portfolio will say more than all the words I could write, so I'll let the images tell the story. To give you an idea of how good the trip was, most of the folks on this year's trip have already booked for our next one in 2009, so if you're interested, contacted our office ASAP. Spaces are limited, and the second trip may already be filled! 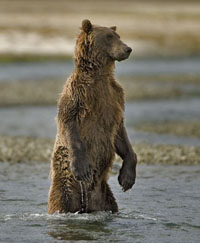 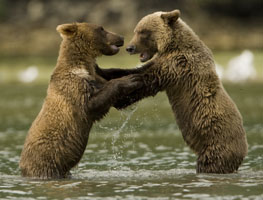 Sometimes after missing a salmon a bear would stand upright to look for another catch; A successful catch of a male
Pink Salmon - the bear walked to our shoreline to feed; Two 2nd year cubs play fight while mom fishes. 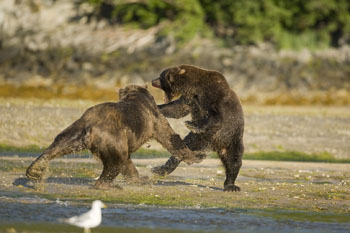 A big boar dives for another salmon; two bears get into a series 10 second fight before the loser gallops away, straight
towards our cameras!; A mother and first year cubs makes an appearance.

At Hallo Bay a curious cub investigates another sow before losing his
nerve and running back to mom, with the other sow in hot pursuit. At mom's
side, the pursuing bear gave up and we had a few seconds of a tense standoff.

This portfolio of 19 images barely scratches the surface of the coverage we had, and the quantity of images we all shot. Each day everyone shot at least 10 GB of images, and some days some in the group shot closer to 30 GB! Rain is a fact of life in coastal Alaska and anyone going here must expect either to have to shoot in rain, or to lose a day to heavy rains - as we did on both trips. But in reality, you only need one good day to get virtually everything you could ever dream of, but with a trip involving nearly 5 full shooting days you're likely to return with a portfolio that you can't even imagine. Mary and I try to keep up with our editing when we're on a trip so that when we return home that chore is done. That was impossible to do on this trip -- there was just too much great shooting.