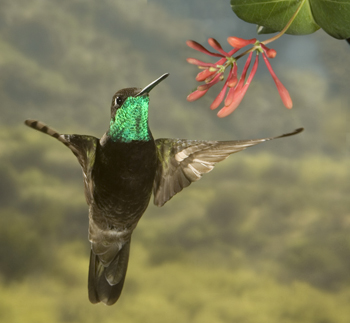 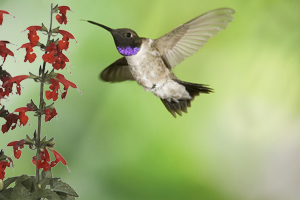 The Best Ever. That's the best description I can give for this year's hummingbird shoot, and for several reasons. During the time span of the three hummingbird shoots we photographed at least FIVE species, including Broad-billed, Black-chinned, Magnificent, Blue-throated, and White-eared Hummingbirds, and possibly a sixth, the Broad-tailed, where a female may have visited some feeders. We also had two or three species that tempted us -- including a male Broad-tailed that was around the Lodge throughout much of the shoot; Rufous, which were present in the beginning part of the shoot, visiting flowers but not feeders!, and one Caliope, that appeared briefly. The only species we missed was the Anna's, which has appeared in the past (twice).

Our natural light woodpecker set was very successful, attracting very tame Acorn and Arizona Woodpeckers. The latter is my nemesis bird, as I originally set up this set specifically for our groups to photograph the woodpecker, which almost always eludes me. The Arizona Woodpecker usually announces its imminent arrival by calling, sounding a lot like a Downy or Hairy, and whenever I'd hear the call, and had the chance to grab my camera, I'd run over to the set. Usually, however, my camera wasn't ready, and by the time I got positioned the bird was done feeding and flew off, seconds after I'd be ready to shoot. I did get it, but not to my final satisfaction -- another reason to return next year! 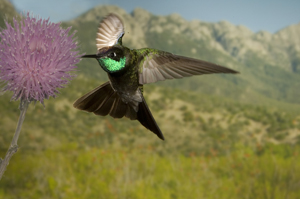 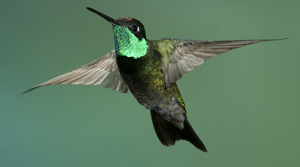 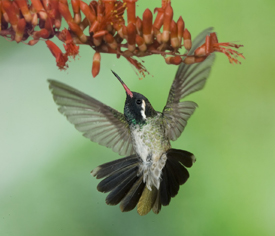 Magnificent hummingbirds and a rare White-eared Hummingbird - this one shot with the PhotoTrap! 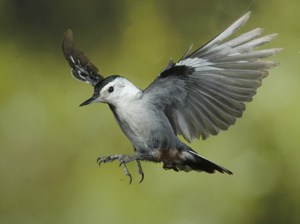 A White-breasted Nuthatch that has nested in a very photographicable site really tamed down this year, and after a week or so both birds would actually land in our hand to feed on mealworms. I set up a remote set to attempt some flight shots, with the nuthatch, and a Bridled Titmouse, too, flying in to a log to eat mealworms. Needless to say, nuthatch and titmouse shooting was pretty easy to do this year, although the Bridled Titmouse has proved elusive for one of our photographers too. 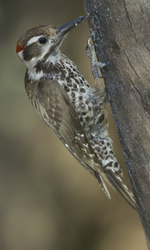 On the opening night of our hummingbird shoots I always ask our participants what their goals are, what they'd be satisfied with, in terms of their hummingbird shooting. Some respond that they'd be happy with one good shot, others with a dozen or so, and a few hope to get dozens - maybe even one hundred - good shots. In every case, by the end of their first day of shooting everyone had more than satisfied their goals! In fact, by the end of the shoot these photographers have a different dilemna - how do they select the best shots from hundreds of images that they never imagined they'd take. 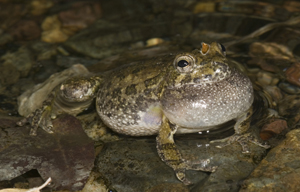 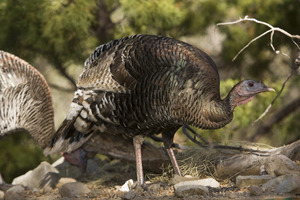 Left: In wet years, canyon treefrogs can be found in the stream behind our lodge.
This year, however, I found a group of males calling in their annualcourtship/mating ritual.
Center: A Bridled Titmouse lands at my nuthatch feeding station.
Right: For several years 'Rita,' a tame wild turkey, has visited us. This year an entire flock of up to 14 birds would visit
our bird feeders, including one table-top feeder we erected for eye-level shots of ground dwelling birds!

While there is some skill involved in shooting, in terms of making their composition and in achieving focus, and in having the patience to stay alert and be ready to shoot when a bird appears, that's about it. Otherwise, all that's required is following our instructions - set their shutter speed and aperture, and ISO to where we tell them, and fire away. We provide all of the flash equipment, so the participants only needed to fire our system with either their own hotshoe flash or via a hotshoe adapter, depending upon the system.

Regarding these sets, here's what is involved. Each of our Five Hummingbird sets had at least four flashes for illumination, with one set having six flashes - overkill, but hey, why not? That's a total of 26 flashes used for the sets. Each set had either Bogen Magic Arms, Bogen Articulating Arms, or Bogen Flex Arms, or Bogen light stands in one case, for a total of 20 Bogen Magic Arms-Articulating Arms in use, and 4 Bogen Flex Arms and 2 Light Stands. 2 Bogen Super Poles were used either for lighting or for shading participants at sets and 6 Wimberley PLAMPS were used for fine-tuning the flight paths of our hummingbird subjects.

As flash backups I had another complete set of Sunpak 544 flashes (4), Fotronix's High Speed heads (2), Nikon SBs (13), and Canon 550 flashes (5), for a total of 50 flashes on hand for the sets. Fortunately only one Vivitar head burned out during the shoot, and needed replacement. To power the flashes we used either several 12 volt batteries, wired in a custom setting, or Quantum Turbo Batteries with Y cables. We had 15 Turbo batteries on hand to power these sets. And while I'd love to say we had all of this equipment, or even some of it, provided by the various manufacturers as sponsors, I can't -- all of this equipment we own and purchased retail.

This year we started a new, included feature with our High-Speed Flash Hummingbird Photography Shoots, and that's a morning visit to 'The Pond,' the desert shooting location maintained by, and on, my friend Bill Forbes' property near Elephant Head, just a few miles south of Green Valley. Each morning 2 of our participants would drive down to The Pond for a morning shoot, spending between 4 and 5 hours in Bill's blinds. The Pond is a wonderful addition to anyone's hummingbird shoot because it offers an entirely different assortment of species we won't get at Madera Canyon. It's possible, on a good day, to see 30 different species of birds, and on any given day you are likely to photograph at least 10 different species, although I've done as many as 22 in one day. Those species include Gambel's quail, white-winged dove, roadrunner, cardinal, cactus wren, pyrrhuloxia, house finch, lark sparrow, Brewer's sparrow, white-crowned sparrow, hooded oriole, Bullock's oriole, verdin, Lucy's warbler, Grace's warber, western tanager, Lazuli bunting, brown-crested flycatcher, ladder-backed woodpecker, Gila woodpecker, green-tailed towhee, boat-tailed grackle, brown-headed cowbird, and several other species. Additionally, antelope groundsquirrels, desert cottontail rabbits, and black-tailed jackrabbits all come to the pond to drink.

The following photos from 'The Pond' were shot by Tom Ambrose, one of our participants of the Hummingbird shoots, and a veteran of one of our Digital Nature Photo Courses. I don't want to steal the credit for these great shots, which include the following species:
Bullock's Oriole, left. Top row: Lark Sparrow, House Finch with ocotillo, House Finch drinking.
Middle Row: Western Tanager, Antelope Ground Squirrel, Pyrrhuloxia
Bottom Row: Gambel's Quail male, and Gambel's Quail with a chick on his back - spectacular shot, Tom! 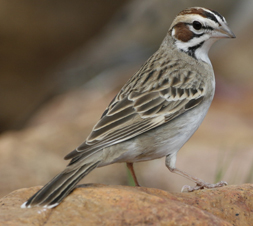 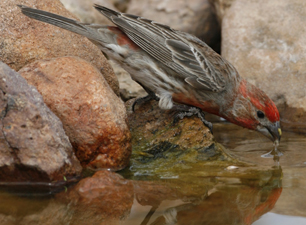 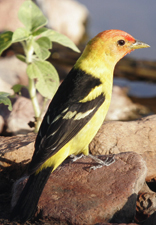 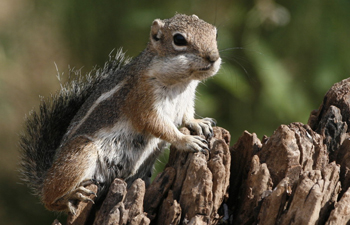 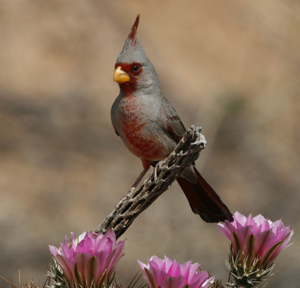 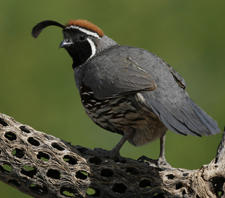 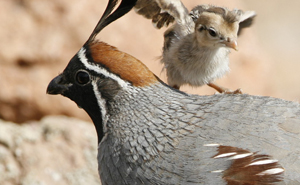 There was only one bad thing about people going to The Pond, and that was that left no open time that Mary or I could get down there to shoot! This year, I only managed to shoot at The Pond twice, where I worked on orioles and tanagers, while Mary, on her only visit, did the usual pond birds and an extremely cooperative roadrunner. Next year, we hope to shoot there several times during the span of our trip. If you would like to photograph at The Pond, you can contact Bill Forbes directly at PhotoTrap@aol.com. Remember, Bill also produces and sells the PhotoTrap, which I use for a variety of different purposes. This year, I ran a camera constantly on the last few days of our stay in Arizona, including the two days required to break down all the sets and props and packing. In fact, I only stopped 2 hours before all light ended on the last day of our stay. I got some spectacular images --- or the PhotoTrap did -- so I was 'working' even when I was working on other things! 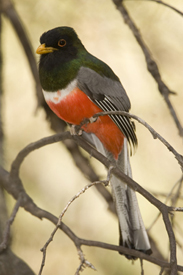 Other notables - one group did extremely well with a black bear that harassed our lodge (see Question of the Month) and ended tragically for the bear. My friend Dave Northcott visited and set up an aquatic tank for water scorpions, water beetles and water boatmen, and other aquatic insects; and another good friend, Cindy Marple, joined us for the most successful Elegant Trogan shoot we've ever had. Trogans can sometimes be seen right beside our hummingbird sets, but they're most frequently seen higher up the canyon, requiring about a half-hour hike to ge to their typical nesting territory. Unfortunately, most folks don't have the time, or take the time, or have the energy to look for the trogans, but they're well worth making the effort.

As you are probably aware, the weather this spring has been odd around the country. Our spring was cold here in Pa., after a very warm and pleasant winter. Arizona, during our stay, was really wierd -- the first days after we arrived it was seasonable, and pleasantly warm, but that soon changed to below average temperatures for the rest of our stay. We always tell people to bring warm clothes, and everyone appreciated doing so. It was funny to watch a few of our friends shooting at the hummer sets, huddled up to keep warm, their coat sleeves pulled down to cover their hands. One night, during our first photo course, it snowed several inches, although by the next morning the only snow that remained was on our water set and on some of the yucca plants at the lodge.

One huge change in our Hummingbird shoots this year was the ownership of the Santa Rita Lodge had changed since our 2006 shoot, and although we had hoped things wouldn't change, we of course were concerned. Well, we LOVE the new owners and everything worked out perfectly, in every respect, so we are more excited than ever about our future trips there for hummingbirds. We have next year's dates available, so if you're interested in next year's hummingbird shoots, contact us ASAP. I'm not sure if the prices are set yet, but they'll be approximately the same (with $100 or so) of our 2007 prices. See you there!