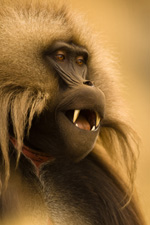 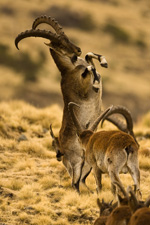 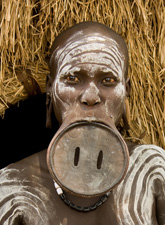 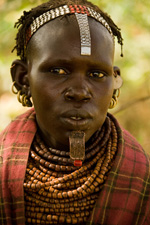 The photos on this page, as always, are a mix of Joe and Mary Ann McDonald's.
From left to right, Gelada baboon, Walia Ibex, Mursi Woman, Nyangatom Woman

The phrase, a land of contrast, is applied frequently to exotic locations, and is over-used and improperly used as hype and exaggeration. Unless it is applied to Ethiopia, for I've never seen anything like it, and you'll soon see why.

Imagine a land where one could photograph wild, stunningly furred Gelada Baboons with a wide-angle lens from less than a yard away, overlooked by a national park scout touting an AK-47 rifle. Or climbing the gentle, lung-busting slope of a treeless tundra at nearly 14,000 feet, following the elusive Walia Ibex. Or lying in our desert camp, after a day of sweltering heat in the Omo River delta, listening to the roar of a wind that, seconds later, blasted us in a coating of fine dust. Or coaxing a Mursi warrior to pose for a portrait, or standing shoulder-to-shoulder with Karo tribesmen as they conduct an evening dance.

Our trip to Ethiopia was part scouting trip, part photo tour, as the owner of Origins Safaris, now a veteran of nearly ten years of visits, acted as our guide. The trip was divided into two sections --the first half for wildlife, in the Simian and Bale Mountains, and the second for people and tribal photography in the Omo River Valley and delta of southwestern Ethiopia. The contrast was huge, in subject matter, in elevation, and in temperature, and made for a very interesting and exciting experience. 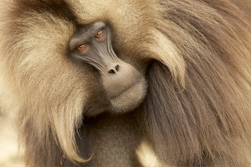 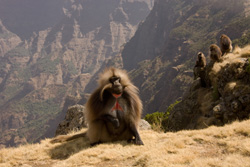 While the whole of Ethiopia has a scattering of virtually all of East Africa's mammal species, these are often skittish and elusive. We were not concerned with these, but instead we sought several endemic species, the Gelada Baboon, Walia Ibex, Simien or Ethiopian Wolf -- the rarest, most endangered Canid in the world, Nyala, and two birds, the Lammergeier Vulture and the Thick-billed Raven. All of these are found in the high country, and at our first destination, in the Simien Mountains, our lodge was located at about 11,000 feet.. Just walking to our rooms in the evening was an effort -- the air is thin and we could definitely feel the difference when we hiked.

The Simien Mountains are, quite simply, spectacular. In some ways it reminded me of being along the south rim of Arizona's Grand Canyon, for as we stood on the edge of this upper plateau we looked out over ridge after ridge of sculpted cliffs, extending to the horizon in one twisted, rugged stretch of landscape. Here is where the Gelada baboon is most plentiful, using the steep, several thousand foot cliff face for their night-time shelter, a strategy to avoid predation by leopards. Shortly after dawn large troops, sometimes several hundred strong, would climb to the top of these cliffs and begin to feed, plucking at short grasses and completely ignoring any human on-looker. With time we were able to work in so close that we were literally lying on our bellies, using wide-angle lenses and fill-flash, to shoot portraits of the Geladas within a yard of our cameras.

Having just completed our 50th mountain gorilla trek in Rwanda, I was blown away by the ease of shooting the Geladas provided. There was so much activity, and so many angles and opportunities that, as a wildlife subject, and specifically as a primate, the Gelada offered some of the most rewarding mammal photography we've ever done. The Gelada itself is spectacular, with males sporting a huge, lion-like mane, and portraits alone were exceptional, but the challenge was incorporating the Gelada in habitat, to show the incredible landscape it inhabits. Hopefully, we succeeded.

Several of us practically killed ourselves trying to get Walia Ibex, and while we were doing so the smarter members of our group drove off with one of our guides to look for Ibex a bit closer to the road. While we were stalking about and gasping at nearly 14,000 feet they found a large herd of ibex that approached and crossed the road in front of them, giving them full-frame head shots! Fortunately, the rest of us eventually had a chance with this herd, and I was lucky enough to be there when a ram stood on its hind legs, pausing, it seemed, for seconds before slamming into a rival, and then proceed to head-butt and spar with another ram at frame-filling distance.

We flew on to the Bale Mountains where the highest concentration of Ethiopian Wolf are found. Although this orange-red coated canine resembles a fox it is a true wolf, which now specializes in eating rodents in the treeless and sparse grasslands of the high altitude plateaus. We were hoping to see one, and, if we were lucky, get some shots. Our guide told us that the wolves were very shy and that we'd have our best luck photographing them if we stayed on the bus we were using, shooting from the window as they, or if they, coursed the fields close to the road.

We'd barely entered wolf country when Sarah excitedly said, 'There's one" and we spotted our first wolf, no two! wolves lying in a tight curled ball close to the road. They got up and moved off a short distance as we stopped the bus, but then, to our delight, two pups rushed up from nowhere and begin begging for food. Now, in our lenses, we had four, an entire family, and the day had just begun! 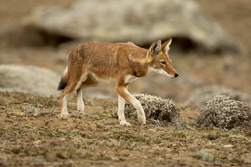 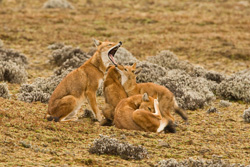 Ethiopian or Simien Wolf, the rarest Canine in the world, with less than 400 in existence

Our guide told us that his record was 13 wolves spotted consecutively as he drove through their habitat. We did the same route three times, so it's difficult to know exactly how many wolves we saw, but we tallied up over 25 'encounters' or spottings of what may have been different wolves, as we counted the family group only once. It's quite possible we had as many as 15 different wolves, and certainly we had at least 12. Not bad, considering there are less than 400 Ethiopian Wolves in existence! 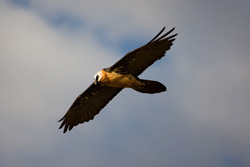 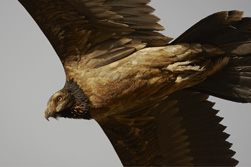 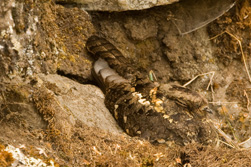 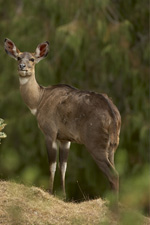 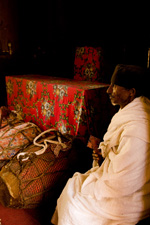 On next destination was a complete change of pace, to the hot desert climate of the Omo River Valley. Here dwell what is probably the last stronghold of endemic culture still in Africa, with several tribes living much as they did before 'discovery' by Europeans. Exposed to the West, and now engaged in trade, the people and their way of life is rapidly changing, and our visit, now, certainly documented that change. When our guide started bringing groups here ten years ago the dress, what little there was, was completely traditional. Now most of the men wore shorts and tee-shirts, although most of the women still dressed traditionally.

In contrast to wildlife photography, shooting people (with a camera) is tough and exhausting, at least if you want to do it right. That's because a photographer must interact with the subject to get an animated pose, unless you're content with simply snapping a static portrait as a bored tribesmen sits or stands stoically while you make a snapshot. It took a bit of time to warm up to the task, as we just naturally felt like we were being intrusive, but when we did, it was great. Granted, most of the shots we did were posed, and one in our group really wanted to capture candids and people acting natural, and he admitted he had a tough assignment there! 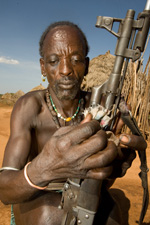 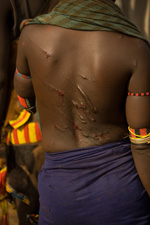 A Hamar tribesman cleans his AK47. The scarred and the
freshly wounded back of a Hamar woman during the cow-jumping ceremony. 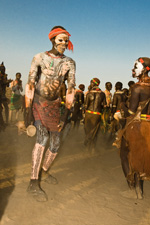 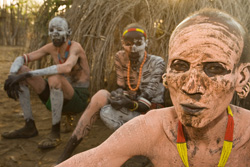 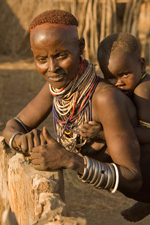 Karo villagers, with the men painted up for a ceremonial dance; woman and baby. 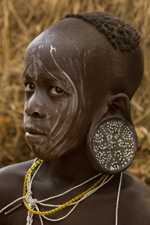 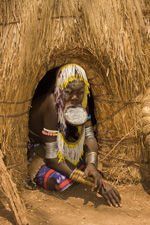 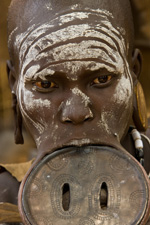 The Mursi tribe number only around 5,000 people but are one of the principle 'draws' to the Omo region because of the incredible
lip adornment practiced by the women. They are a war-like people and have, most likely, been exploited by tourists in the past.
The shoot, while exceedingly interesting, was the most difficult for us, for a variety of reasons. 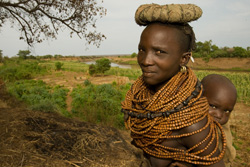 The Nyangatom village was located across the river from our camp. They are farmers, and friendly, and their dancing was spectacular.

Our guide has been after me for years to check out Ethiopia, and Mary and I did this trip thinking we'd experience it once and probably be done with it. But we don't feel that way now, as we're dying to go back. At the very least, we envision adding a several day extension to the Simien Mountains for the Gelada, Lammergeier, and Ibex, along with some people and landscape photography. But the lure of the tribal culture of the Omo may be too much to resist as well, so who knows what we'll be offering in the future.

On a separate page I've posted my Field Journal from this trip which will provide far more interesting and detailed accounts on the people, the tribes and customs, and the shooting. The Question of the Month also deals with an uncomfortable encounter we had with a very rude and self-centered National Geographic photographer.