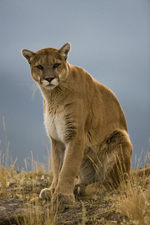 A slow shutter speed pan of a running puma - we did several runs back and forth as a puma raced across a meadow.
A 500mm portrait of another puma - I chose a long telephoto to help isolate the puma from the background, by
limitiing the depth of field. We were often close enough to shoot with a 70-200mm for similar images.
Another slow shutter speed of a running wolf - one of four that we filmed running through the meadow.

For the third straight year we offered our Animals of Montana Fall Photo Shoot, and as you might expect, it was a real success. One of the reasons we offer a fall tour is to accommodate those photographers who will continue on to our Yellowstone Fall Photo Tour. Ironically, only one of our shooters actually did so -- the others came specially for the Animals of Montana shoot, and they were not disappointed! We shot virtually everything - grizzly and black bears, black and snow leopards, Siberian tigers and Barbary (African) lions, pumas, bobcats, Canada and Siberian lynx, gray wolves, red foxes, raccoon, and porcupine and pine marten - 15 different species in all, and about thirty animals in total.

Rather than a lengthy trip report, I think the images tell all, so here's some examples from the shoot, with my brief captions: 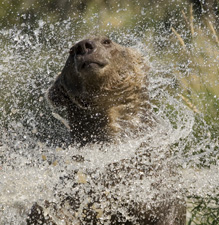 While digging a burrow, this badger backed out and paused to snif a thistle flower next to the hole - a cute moment!
This is a crop of an amazing sequence as a Grizzly Bear shook a spiral wheel of water after plunging into a deep pool
in a stream where we were filming.
I dropped to my belly and shot this wide-angle view of this black bear with my 28-300mm lens. 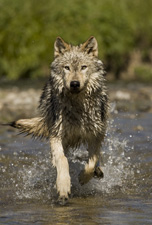 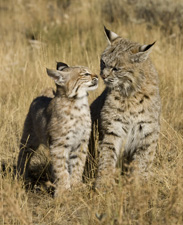 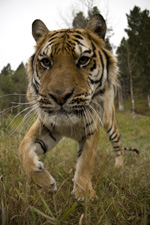 On our 'rain day,' we had the opportunity to film our favorite species again, for an extra but very reduced fee per animal.
We did some wonderful work with gray wolves at a stream, and a bobcat adult with kittens. The kittens were a huge
amount of fun, racing about and often leaping into the air in a scrambling wrestling match.
Several of us shot portraits of this Siberian tiger literally from ground level, and for a wierd look I used a 16-35mm,
which exaggerated the perspective, making the tiger's head as large as its entire body.
We had wonderful weather and light for the day we shot a snow leopard - overcast and cool, just like its
native habitat in the high country of central Asia. 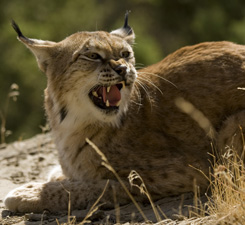 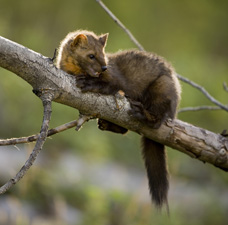 The rare Siberian or Eurasian Lynx is an entirely different animal from the Canadian Lynx, resembling a rangy, smaller
puma. In Europe they often kill deer, and after seeing one upclose I can see why.
The Canadian Lynx is much smaller and paler and with less spots.
Pine Marten in tree. 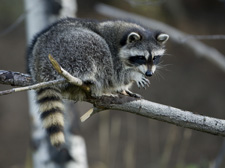 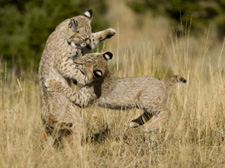 I was surprised when one of our eight photographers named the Raccoon as one of his favorite subjects and favorite shots
of the trip, but it was animated and funny as it balanced on a limb.
Troy's Barbary Lion, a race of the African Lion, is extinct in the wild. This race was noted for its incredible mane, probably
the most dramatic and impressive of any variation of lion. In addition to neat walking shots and close portraits, we had some
great opportunities to film the lion running, uphill and down, which truly showed its incredible musculature.
One of several sequences of the bobcat kittens wrestling.

Our shoot consists lasts three days, with an optional 'rain day' built in. Most years we do not have to use the rain day which gives us the option of shooting on the fourth day where we have the option of shooting any subject again at a discounted price. This year, we filmed a cougar running back and forth, charging toward the camera straight-on, sideways, and at a 1/4 view, at fast shutter speeds and slow. Likewise we did three wolves at the river where they raced through the shallows, and two young adult grizzlies here. The bobcat and kittens was so much fun we did that again as well - truly overloading our computers' abilities to store images!

Most photographers shot at least 80gb in the four days, and several remarked that they never shot so much in such a short time. It was just wonderful.

Next year, in January of 2010 we'll be doing our Second Animals of Montana Winter Wildlife Photo Shoot which will include wolf packs, and virtually everything else, too. If you are interested, contact our office to get on our first contact list.