Our Tanzania Photo Safari was scheduled to coincide with the wildebeest (gnu) migration in the southern Serengeti, and this year we saw more gnus than ever before. Approximately 2 million animals make up the herds that range from Tanzania's Serengeti to Kenya's Masai Mara but it is impossible to know exactly how many animals are present at any one time -- as you are viewing the animals from ground-level. This year, on one day near the Lake Ndutu area, we were in a herd that stretched, quite literally, as far as the eye could see. With my 18X binoculars a distant landmark hilltop, Mtiti, had gnus up to its base, while in the opposite direction gnus extended to the horizon.

I mention this because it is thought that there may have been 50 million bison in our American west, with some authors suggesting that there may have been 200 million. Imagine what a sight that must have been. Imagine the carnage we executed in the 1850's through the 1870's in eliminating those herds. When you are amidst a portion of a herd of 2 million, and animals seem endless, it's a somewhat sad thought to consider.

Normally, in late January through mid-February the gnus are giving birth, a strategy devised so that the vulnerable young flood the plains with so many young that predators are simply overwhelmed. In this way, within hours after birth the young wildebeest that avoided predation have an excellent chance of survival. If babies were available year-round, predators could simply concentrate upon the young, and the survival rate would be far reduced. Gnus have the ability to put off their births by a few weeks if environmental conditions are not perfect, and this year, in the Serengeti, that's exactly what happened. We saw only a dozen or so newborn babies in our 9 days in the southern Serengeti, which would have been disasterous had we not lucked out with the best wildebeest birthing we'd ever filmed ... on the start of our trip, on the first full day on safari, in Ngorongoro Crater.

We'd spotted a female with the tell-tale white hooves of a baby sprouting out her back end, and the bulbous sack of amnionic fluid that resembles a white balloon that's visible from quite a distance. The female was part of a small herd that was grazing along the roadside and, as is typical of gnus in the Ngorongoro Crater, the animals are oblivious to nearby vehicles. Several times over the course of less than two hours the female teased us by appearing to move off -- in the Crater you cannot drive off road, but each time the female resettled and, eventually, lay down within 300-400mm range of the road. As we watched, another female began birthing, and within minutes of one another both gave birth.

Typically gnus birth in one of two ways. Sometimes a female will deliver whileon her feet, spinning in a circle that seems to propel the baby from her body as she moves. Other females are more traditional, birthing while lying down. We had both versions, in short grass, on this first morning, and I can't imagine ever having a better opportunity to photograph a birthing sequence. Day One, our first full day, and our mission -- to photograph the birthing of the wildebeest was accomplished.

As the report headlines indicated, we did extremely well with lions -- having 212 sightings during the two week trip. This number does not represent 212 different lions but 212 different sightings, where we might see the same pride on different days, offering different photo opportunities. Probably the best of these for me was when a small pride, dominated by a beautiful blond-maned male we called 'Lance, the surfer', slunk away from their resting spot in the grasses when some tourists exited their vehicle. As strange as it may seem, lions are often disturbed and frightened when they see people on foot, and this pride showed this behavior as they slipped away. Fortunately, though, after moving off fifty yards or so the pride turned around to inspect the intruders, and their posture, head position, and intensity was just like that which a lion adapts when it is hunting. The looks were intense, and we were directly in front of the cats as they stared. Magnificient shots -- backlighted by a mid-morning sun.

While we had seen plenty of gnu births over the years (although never filming this satisfactorily), we had never seen a Thompson gazelle birth. Thompson gazelles are the most abundant of the grassland antelopes and we've often seen tiny babies, in some cases even just minutes after birth. But we always missed the actual birthing ... until now.

Just along the roadside we spotted a female lying on her side, in just a slightly different pose than normal. We stopped, glassed her, and saw that a baby was just emerging. The female showed no concern and we stopped, within 600mm range, and called in by radio two of our other vehicles. The birth went smoothly, just a simple slide out, and within minutes the baby was attempting to rise to its feet, falling repeatedly as it did so. While we'd wanted to film a birth, and did, the real show was the minutes afterward, when the baby gained its footing and the female groomed and licked and, eventually, nursed the newborn. It was simply wonderful.

One of the most interesting observations of this trip involved a male baboon and a cheetah. The cheetah had been resting in long grass, close to the line of travel of a lone male baboon that had crossed the grasslands. Baboons are bold, powerful animals that have little to fear from cheetahs, but a lone baboon, in high grass, might be ambushed by a leopard, and could easily be killed by a lion. We were surprised to see the animal alone. As it neared a kopji, the granite boulder islands that dot the Serengeti plains, the baboon spotted the cheetah. Repeatedly the baboon would stand upright on its hind legs to watch the cheetah, but it made no effort to get too close. The cheetah stayed low, snarling its displeasure, and the two remained in this standoff for several minutes until the cheetah lost its nerve and turned to slink off. As soon as it broke its stare the baboon charged, and everyone watching was amazed at the incredible speed, and boldness, exhibited as the baboon gave chase. The cheetah ran off, eventually outdistancing the baboon and ending at another kopji perch about 1/2 mile from the encounter. There, with her attention directed at the distant baboon, we had some of our best shooting opportunities of a cheetah on a kopji.

Another great cheetah encounter involved a mother with young cubs that had captured a Thompson baby. Apparently the cubs were well fed because they showed almost no interest in the kill, feeding sporadically but putting on quite a show as they moved about in the grass. In all we had 31 cheetahs on the trip, 3 leopards, and 1 serval.

Because of the lateness of the birthing, our trip ended just as we presumed the birthing was about to erupt en force. But we were wrong. Another photographer friend arrived on the day we were leaving, and not only did the gnus not give birth, but they also moved out of the Ndutu area and were quite scarce for the duration of his safari. When we returned to Nairobi we learned that the gnus had moved to a location where we'd normally expect to find them during June and July, and there the birthings took place. Fortunately, though, we had our gnu birth 'in the can,' so we had been free to concentrate upon other subjects.

As it turned out, the Serengeti became even drier after we left, and Lake Ndutu -- near the site of our camp, was quite low. On our last full day we filmed at ground level the herds of gnus and zebras as they crossed the shoreline of Ndutu. The animals' legs distorted in shimmering waves from heat-disturbed air close to the caked mud surface. Days after we left the lake nearly dried up and temperatures exceeded 100 degrees, so we got out just as the weather, and herds, turned for the worse. Fortunately we departed from the Serengeti before the temperatures really rose, which they subsequently did. 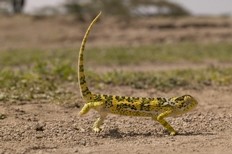 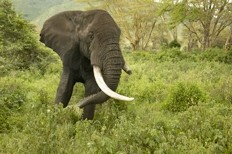 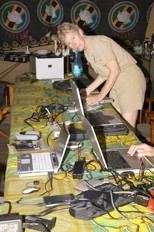 Above, top row: Sunrise on the Serengeti near Ndutu; Common zebras fighting, and a flap-necked chameleon on a stroll. Above, second row: Bull elephant with a 24mm in Ngorongoro Crater, a kori bustard in full breeding display, and a pair of lions in play.

Almost everyone was shooting digital (2 of 12 were not) and most afternoons, if we were in camp, were spent in our charging-downloading tent where we shared images, edited, and recharged. Whatever happened to the days when one could nap during a break, or spend an afternoon reading? Welcome to the age of digital!