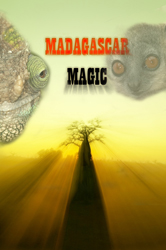 Chameleons, geckos, and plenty of Lemurs -
Madagascar was a very pleasant surprise! 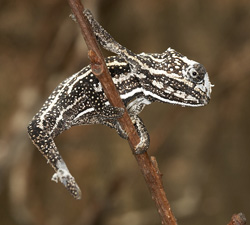 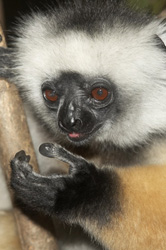 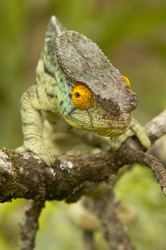 Prior to our two Kenya Photo Safaris and our two Rwanda Mountain Gorilla Photo Treks, I, along with our good friend, Carolyn Hooper, traveled to the island continent of Madagascar on a scouting trip. It was the first time I'd been there, and represented truly one of the last wildlife locations that I've always hoped to visit.

I traveled there with some reservation, for the popular wildlife press, and the reports I've heard over the years from friends or acquaintances that have been there, has painted a rather bleak picture of the country. By some it's been described as an ecological train wreck, with the rampant erosion, deforestation, and the over-population, basically the root cause of all. I was expecting the worse, in terms of a so-so wildlife experience, in my expectations of the roads and the accommodations and food, and, in the quality of the experience. I was misled.

We thoroughly enjoyed Madagascar, and were pleasantly surprised by the accommodations, the food, the roads, and, especially, the wildlife experiences. We stayed in two locations - one, to the north, for forest-dwelling lemurs like the Indri and Sifaka, and the other in the southeast, at the private reserve at Berenty, where the two iconic species of Madagascar, the Ring-tailed Lemur and the Verreaux's Sifaka, are found. The roads to both locations were good to fair, with the worse, that going to Berenty, far, far better than the well-traveled roads in far wealthier Kenya (in terms of tourist dollars that comes in to the country), whose roads, in many locations, and especially the roads that lead to a World Heritage Site, the Masai Mara, are a disgrace.

Lodging was very good to good, with that at Vakona Lodge near the Analamazaotra Reserve and Mantadia National Park quite comfortable - reminding me of a top-quality lodge we stayed at in Borneo, to good (at Berenty), but to be fair, no worse than accommodations I've used in Alaska or in Botswana. Every lodge had hot/cold running water, flush toilets, showers, and electrical outlets that work, and the food everywhere was fine.

In short, either things have changed in Madagascar or its been given a bad rap, because conditions were fine. And the wildlife viewing was superb!

Our trip comprised four main shooting areas - a Chameleon-Gecko farm not far from the capital city of Antananarivo, the jungle-like forests of Analamazaotra and Mantadia, and the 'lemur island' found there, and the various locations at and around Berenty. All were notable in that our local guides were EXCELLENT - extremely helpful, very friendly, and quite energetic. Indeed, our local guides spoiled me, acting almost like golf caddies as they carried my gear about and, at one location, actually spotting the best locations where views were unobstructed for photographing the Indris. I can't say enough good things about the helpfulness of our local guides. 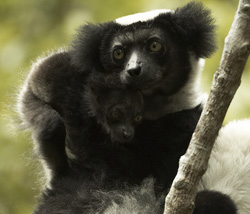 I was quite happy with my shooting, both with the reptiles and amphibians we found and also the wonderful lemurs. In all, I believe we saw around 11 species, and photographed at least 8 species quite well. Three species, however, truly stand out. The Indri, a panda-like large black and white lemur, is a forest dweller, and Carolyn and I had envisioned having high-contrast glimpses of this lemur in the thick cover of the tall trees.As it turned out, in spending several hours with the Indrias, we had some wonderful views and great shooting opportunities - far more than I had expected, and thanks, in a big way, to my local guide. Indris are famous for their call, a wailing cry reminiscent of the song of a humpback whale, with the same rising and falling, haunting notes. To hear an Indri is a treat, but it is also an audio symbol of the endangered Madagascar wilderness, one that should not be lost.

Ring-tailed Lemurs are one of Madagascar's icons, but when we first arrived at Berenty, where they are common, I was initially quite disappointed, after the first thrill of seeing one had dissipated, for the lemurs around the headquarters are suffering from a fur aliment that resembles mange. Most of the lemurs we saw on our first day were ratty-looking, with their normally vividly banded, ringed tail barely more than a wisp of scraggly black and white hairs. From a Discovery Channel film-maker who was working on a documentary on the Ring-taileds, we learned that an invasive plant is thought responsible for the skin/fur condition. The lemurs, either through contact or through eating, are losing their fur. Fortunately, the fur grows back in the winter months, but it moults out again during the warmer months. 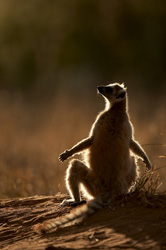 Fortunately, we found many individual lemurs whose fur coat, and tails, were almost normal, and I was able to capture one of the iconic shots I'd hoped for, that of this vividly marked lemur backlit as it sunned in post-dawn light. Ring-tails are famous for their basking, sitting upon their haunches, their long arms resting upon bent knees, as they soak up heat in the early morning sunshine. I'd expected to see that, or at least had hoped to, but I didn't expect to see them feeding upon spineless prickly pear cactus pads, which they bite into, tear, and snap off. Cactus pads are tough, and I was amazed at the jaw-strength displayed by these cat-sized lemurs. 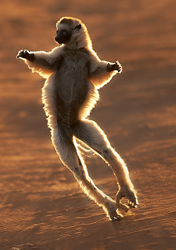 Madagascar's prize, however, is the Verreaux's Sifaka Lemur, a creamy white, large lemur with a black face and yellow eyes, crowned with a chestnut cap, which has the most incredible stride of any animal I've ever seen. Like all lemurs, this Sifaka spends most of its time in trees and, like the others, is capable of leaping huge distances from one tree to another. It does so by standing up and jumping, landing at the next tree in the same pose - unlike most primates that leap, head-first, and land forelegs and hands first.

That, however, isn't what sets this Sifaka apart. Instead, it is how it travels across open ground from one grove of trees to another. Then, instead of walking, cat-like, like the ring-tailed lemur, or like a typical monkey, the Verreaux's Sifaka literally skips and prances across the ground on its hind legs. The first time I saw this I was astonished - it is a funny sight, but it is also so foreign, so odd, that one is either amused or dumbfounded, or both. This lemur travels in groups, and to see one, then another and another, bounding-skipping-bouncing-hopping across several dozen yards of open space is truly one of the most spectacular, memorable natural sights I've ever experienced.

And, I wanted to photograph it badly! Having overheard another tourist mention he'd seen a Verreaux's hopping down the road in front of him, and getting a snapshot, I hoped I'd be as lucky. On our first afternoon at Berenty, our guide took us to a gap between trees where he hoped a troop would pass. They did, and under personally-induced stress, I caught a couple of nice backlit frames of a Sifaka.
The next day, just prior to a scheduled trip to another location in Berenty, I found another passage point, and managed a few more frames. Verreaux's are supposed to follow a pattern, so the following day, our last in Berenty, I roused myself from the computer in the mid-afternoon to stake out the passage. Imagine my disappointment when I found that I was late - or they had passed through early - and all put one had already crossed the clearing. Luckily, that final lemur bounded in my direction and I shot a good series, the best of the lot, before it disappeared into the trees.

Quite unexpectedly, I really enjoyed Madagascar and I hope to take a small group there in the fall of 2008, if everything goes as planned. If you're interested in photographing Madagascar with us, please contact our office ASAP and we'll keep you posted on plans for that trip.