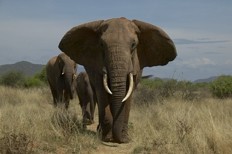 Sandwiched between our two Rwanda Mountain Gorilla Photo Safaris, our February Kenya Photo Safari proved especially productive. January-February is, theoretically, the lean times and, on our previous January trip several years ago, we had a spectacular buffalo kill involving 7 male lions. We were hoping for similar luck this time, as remote as that might be. Lightning didn't strike twice, so to speak, and we didn't have another lion kill, but we had other surprises that were equally exciting.

Chief among these was witnessing two wildebeest births in the Masai Mara! Less than three weeks earlier we had been in the Serengeti of Tanzania during what should have been the prime time for wildebeest births but the birthing was late, presumably because of a lack of water. While we had had success in the Ngorongoro Crater (see Tanzania Trip Report), we only saw a few baby wildebeest in the Serengeti. So encountering wildebeests, or gnus, in the Mara at this time of year was a bit unexpected, and to catch two giving birth was an extraordinary piece of luck. James Hager, one of the trip's participants, had spotted the first pregnant female with tiny white hooves protruding which caught James' attention. The gnu was a part of a half-mile line of gnus that were walking and occasionally trotting across the Mara plains, heading toward the Mara River where, at some point, they would eventually cross. For nearly an hour we followed the female at a respectful distance, losing her at times as she moved through the herd.

Eventually, after three or four false starts where the gnu would settle as if to give birth, she did in fact do so, and at a far shorter distance than we'd normally expect in the Serengeti. It was a great shoot, and we could have headed back to camp then, but we had spotted another gnu earlier that was about to birth, and we decided to look for her again. This seemed a dubious proposition, since that female, and much of the herd, had passed by while our first female stopped and gave birth. En route, while we looked, most of our vehicles were side-tracked by a male lion feeding on a recently killed buffalo, but Mary and James' vehicle had continued on and spotted the birthing female again. This second birth was even better than the first, and all of us were treated to a real show as the calf gained its footing within two minutes of birth, and jogged off on spindly, unsteady legs within a few minutes more. For the record, the first baby gained its footing within seven minutes, and the second in two!

Leopards are always among the top trophies to film, and we're always concerned about getting a good leopard for the safari. Samburu, our first shooting location, can be good for leopards, and we always hope to get a leopard there -- insurance, at least, in case we fail to find one elsewhere. On this trip we were especially lucky as we found a very cooperative female on the first full day of the safari. She was lying on a fallen tree, offering wonderful shots for many minutes before leaving that perch and walking passed one of our vehicles before perching on another low snag within head-shot distance of two of our vehicles -- where she remained for multiple gigabytes worth of frames! 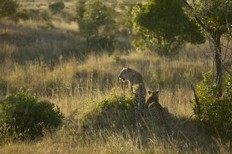 The next day we found her again, but this time she was with her nearly full-grown cub where the two fed upon an impala fawn they had killed. On the following evening we found the two of them again -- obtaining more great shots. Later, in the lower Masai Mara, we found another mother-cub pair, this time feeding on an adult impala they had stored on the ground. We were lucky to get both mother and cub twice -- in the evening and the following morning -- providing truly extraordinary shots.

We also had great luck with a male Black Rhinoceros which fed unconcernedly in the open, often punctuating our shooting sessions by dramatic scent marking displays. We stayed with that rhino for nearly an hour, with our group eventually having enough -- the rhino still fed in the open!

Most zebras and wildebeests should be in the Serengeti at this time (and the numbers of both we encountered there would validate that assumption), but semi-permanent residents from the areas around the Masai Mara accounted for our gnu births and, most extraordinary, the huge number of zebras we saw. In fact, on this February trip we had the longest lasting river crossing we've ever had - 2 hours and 45 minutes of zebras crossing the Mara River. While the river was low, which might seem to make for an undramatic river crossing, the low water did, in fact, generate great images since the zebras could literally run across the shallows, generating great splashes. Because of the low water we could risk getting out of the vehicle without the worries of hidden crocodiles snatching us from the water's edge and, by using a steep bank and well placed boulders, we got close to the river's edge for near water-level, really dramatic images.

Between our departure from Kenya in early December 2004 and our return in mid-February 2005 the Mara had received a lot of rain, and the grasses were unnaturally high. Consequently cheetahs were unusually difficult to find -- we had 10, but we often have 25 or more. Lions were a bit easier to find, but it wasn't until our last afternoon that we finally had a great encounter with a nice black-maned male. Nonetheless, we had 125 or so lion spottings for our trip!

Along with the odd January rains temperatures were unusually warm as well. For the first time ever Mary and I wore shorts for the entire trip's game drives. While this may have accounted for the difficulty in spotting cheetahs (our legs may have frightened off these keen-eyed predators), it underscores how warm it was. Nairobi, Kenya's capital, reported the highest temperatures in over 20 years. While we experienced that heat wave, the Serengeti was boiling -- over 115 degrees in the shade, over 130 in the sun (according to one tour operator). Everyone was wondering about global warming ...

One of our participants kept an accurate bird tally, and without too-much effort recorded nearly 200 species. Typically anyone with any type of interest will see at least 100 different species and probably photograph at least 50, and anyone trying should be able to nearly double that number. Among the birds many photographers had great luck with secretary birds against sunrise skies and even better luck with the giant turkey-sized ground hornbill, a big black ground-dwelling bird that is far more formidable a snake-eater than the more famous secretary bird. Mary and several others got some wonderful shots as a hornbill collected a green night adder, frog, and lubber grasshopper to take back to its nest, holding all three items in its beak simultaneously.

Birds of prey were cooperative for many, and collectively the group probably shot more Marshal eagles than ever before. The Marshal is the savannah's largest eagle -- some folks got near-headshots! Tawny, steppe, batelur, and fish eagles were also filmed, including one bout with a singing/displaying fish eagle that tossed its head back as it yodeled its haunting, ringing cry.

Above, left: An adult spotted hyena greets a 'black' pup, a very tiny pup. Middle left: An olive baboon gestures in a dance-like move. Middle right: Colobus monkey portrait. Right: An olive baboon skips across a shallow river on its hind legs.
Left: One of several serval cats we saw.
Digital shooters far out-numbered film photographers, and only 3 of the 12 people (including Mary and I) shot film. Power is never a problem for charging or backing up data, but storage can be, and I'd refer you to our previous Tip of the Month for further guidance on this issue if you're contemplating a safari.

As you should be. As I've said so many times before, there is no place like Kenya and the shooting there is truly unrivaled anywhere else in the world. Next year we'll be doing two safaris, but at the time of this posting we have one spot open. To get on our waiting list, or to reserve a spot for our 2006 trips, contact our office ASAP.