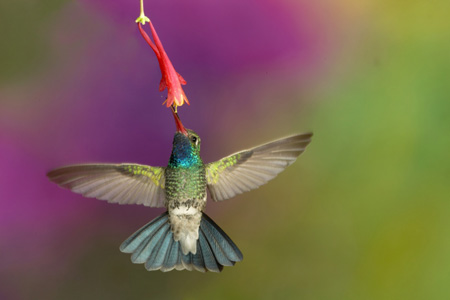 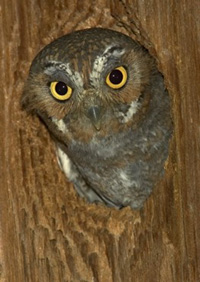 Several years ago we offered 'the last shootout in Madera Canyon,' a hummingbird shoot that we expected would be our last. Well, we lasted a year of sitting out this wonderful area of the country before returning, and renewing our hummingbird shoots in southern Arizona. Last year, because of a committment to visit SE Asia to photograph orangutans, Komodo dragons, and other animals, we missed doing a hummingbird photo shoot, but returning this year more than made up for the lapse. It was, almost certainly, the best hummingbird shoot we've ever had in Madera Canyon. 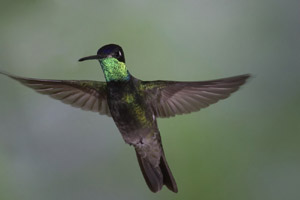 Digital shooting offered such advantages. Although all of our photographers use our flash equipment and setups, having digital allowed everyone the freedom and peace of mind to move props and to rearrange sets to their own particular aesthetics. Props were easily moved -- flowers and plants in bottles move easily on a table -- and the lighting could be checked as easily as simply taking a shot and reviewing the LCD image and the histogram. It made making images so much easier and effective -- everyone loved it.

Species diversity was reduced this year, and only three species visited our feeders, but these did so on a regular basis and I do not believe anyone missed getting shots of all three - the Broad-billed, the Magnificent, and the Black-chinned. Right before we started the shoot a pair of Broad-tailed Hummingbirds visited one of our sets, and upon the conclusion of the shoot I found the nest of a huge Blue-Throated Hummingbird, but both species avoided our feeders during the shoot. Nonetheless, the opportunities that these three species provided were incredible, and by Day 3 of the four day shoot virtually everyone could have stopped if they had to -- they certainly had captured the images!

Relatively few photographers offer hummingbird photo shoots because of the equipment required. If participants bring their own, then those photographers must have a sufficient number of flashes, slaves, cords, light stands, etc. to make an effective lighting set. If one only plans on photographing hummingbirds once or twice in their lifetimes (doubtful, once you've done it well), the equipment and cash outlay involved makes the endeavor somewhat prohibitive. If you don't have that equipment, then it must be provided, and that represents a huge outlay if it's done right. Few photographers want to invest that type of money. 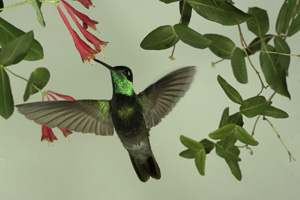 Further, as I point out to our participants on the first day of orientation, attempting to shoot hummingbirds by yourself, with just one set at a hummingbird-rich area is extremely counter-productive. Hummers are somewhat territorial and certainly birds of habit, and if their traditional feeders are available birds have little reason to look for others, or to visit your feeder that might be partially blocked by a battery of flash units. One could quite easily spend an entire week manning one flash setup and not have a single bird because all of the hummers are attracted to the feeders already established. That doesn't happen on our shoots for a variety of reasons, so photographers are assured of getting action.

As I said a moment ago in an earlier paragraph, we supply the equipment for these shoots, and all a photographer needs to do is arrive on site with the appropriate lens, camera, and tripod and start shooting. However, to give you an idea of what's involved, here's a sampling of the equipment WE USED for the five flash setups we provided. Each setup had at least three flash units, and most had four. The flash equipment included:

Additionally, I had along 30 Bogen Magic Arms, Variable Friction Magic Arms, or Articulating Arms, 8 portable light stands, 3 Studio Poles, 15 Bogen Flex Arms of heavy and light duty style, six mini-tripods, and 12 Wimberley PLAMPS for fine-tuning flower setups. We had a large variety of slave units to trip the flashes -- including about 12 Peanut Slaves, 15 Wein hot-shoe slaves, and 2 Quantum Master Slave Units. 15 ballheads for fine-tuning lights, PC cords for connecting flashes, accessories PC cords for attaching to multi-PC blocks, etc. etc. were involved, as well as about 30 pounds of paper that comprised our backgrounds. 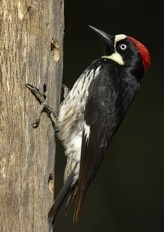 The net result, however, was some mighty fine flash photography using high speed flash. However, we also had some great luck with other subjects as well, and photographers that put in the effort and were just a tiny bit lucky had great shots of Elegant Trogon, Elf Owls, Whiskered Owls, Scott's Orioles, and Western Tanagers. Nearly everyone obtained great images of birds attracted to our natural light setups -- including Mexican gray-breasted jays, black-headed grosbeaks, lesser goldfinches, pine siskins, house finches, acorn and Arizona woodpeckers, white-breasted nuthatches, bridled titmice, yellow-eyed juncos, lazuli buntings, and chipping sparrows. I know I'm missing a couple of species.

We set up a whole collection of natural light sets that are available for people at any time of day when they're not manning a hummingbird set. These are positioned to take advantage of both afternoon and morning light and, because we feed the birds regularly, we'll have some that grow incredibly tame. Two of the most rewarding experiences this year involved these sets. At one, a Scott's oriole would announce its presence by singing, which 'conditioned' us to provide mealworms to one of several mealworm feeders we had set up. Nearby, another one of these feeders attracted a white-breasted nuthatch that was nesting nearby, and that bird would fly down and eat while we stood only three feet away! The other 'neat' experience, however, involved the acorn woodpeckers -- colorful harlequin birds that grew so tame that they'd fly to us as we baited our setups and wait within arm's reach. The Mexican jays would do likewise, but they were such robbers, and gluttons, that they didn't endear us as the woodpeckers did. 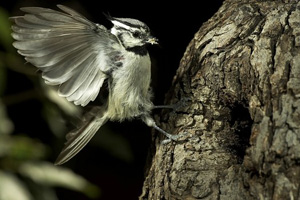 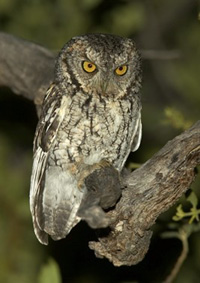 This year we located a very easy-to-photograph Bridled Titmouse nest, and a few of us were lucky enough to be there when the bird conducted its most active feeding. That same species visited three natural light feeders, offering fleeting chances for photographers that were ready. An elf owl nested nearby as well, and in the evening it would clamber to the edge of its nest hole, offering some great chances for shooting this, the smallest of America's owls. I went for a Whiskered Screech Owl search, and had luck one evening, and, inspired by the work and the luck of participants on our last shoot, on my last full day in the Canyon, I hunted successfully for Elegant Trogons. Three pairs of these beautiful, sedentary, colorful birds wandered through the sycamore-lined canyon and we'd hear them almost daily. For those making an effort, it's not too hard to get shots.

As we had years ago, a Pocket Gopher made an appearance, and as this subterrean mammal never encounters people, it was quite tame and literally crawled out of its burrow and ate birdseed from my open palm. One night a Black Bear attempted to eat a snake I had rescued from the road, but fortunately that was the only time we had any 'bear problems'. Truly a highlight this year was a BOBCAT that passed through the canyon on at least two occasions, passing within 20 feet of a hiker one day! I almost got shots both times, but didn't .... but this showed me that it was indeed possible as bobcats in the canyon must be quite accustomed to people.

We had a few reptiles to photograph (I always purchase an Arizona hunting license that allows me to collect particular species), and this year we had several lizards, a western diamondback rattlesnake, and a western coachwhip snake for an afternoon's shoot. Great stuff.

There was one frustrating aspect to this entire stay in Madera Canyon, and that was that Mary and I simply didn't have enough personal time to actually enjoy the canyon and its wildlife for ourselves! Next year, we're actually planning to book in one week between a few of the shoots so that we can indeed hike, work on trogans and owls and bobcats and nesting hummers and flying hummers and visit the desert at night and explore new trails and ... well, you get the picture. We're very excited about the area, and it's why we call this shoot 'Hoot Hollow West,' as we consider it our second home.

We will be offering Three Hummingbird Photo Shoots in 2006 and Two Digital Complete Nature Photo Courses, and we anticipate they will fill fairly quickly. If you are interested, please contact our office to be placed on our 'first contact list' where you'll be notified as soon as we have the dates and prices set. It's a wonderful time.

At this time (May, 2005) we do not have our updated brochure for 2006 posted, but you can read this year's brochure, which should give you a good idea for what is being offered for next year.